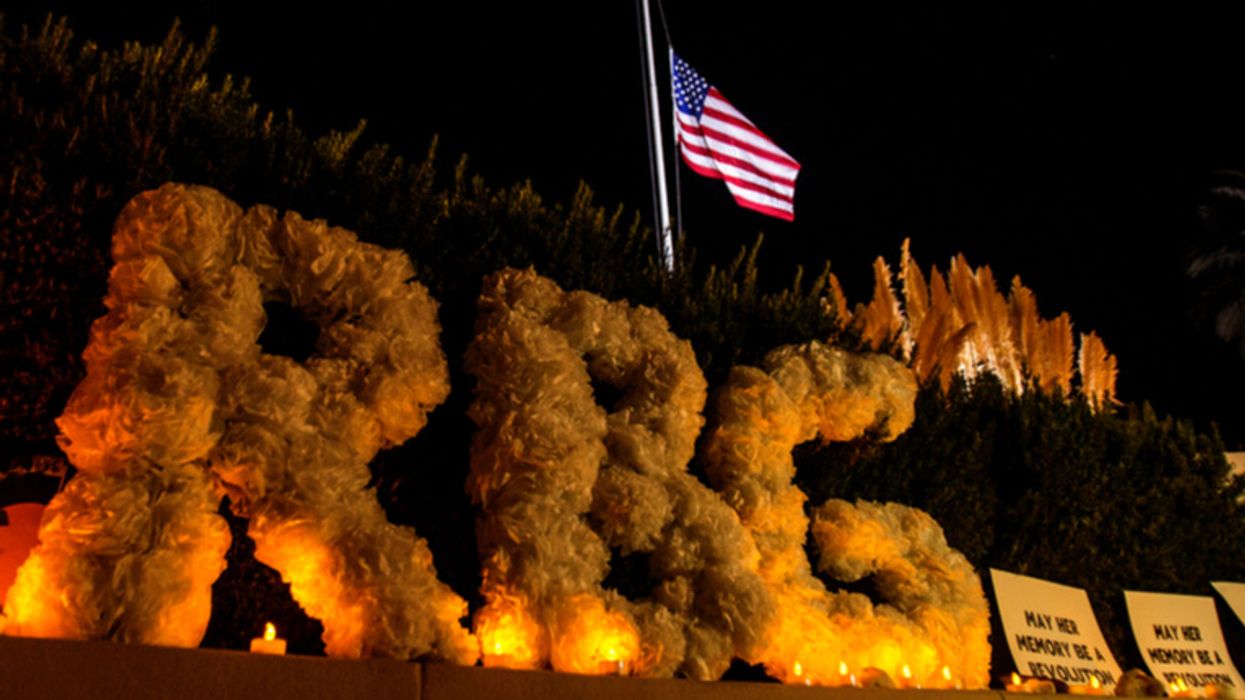 An US flag is flown at half-staff as people take part in a memorial honoring Ruth Bader Ginsburg at outside the United States Court of Appeals in Pasadena, Calif., Sept. 22, 2020.Shutterstock/ Ringo Chiu
Matt Robison
September 29, 2020

Boiling with outrage at Republican hypocrisy, agonized over the prospect of a 6-3 Republican-appointed Court, and encouraged by promising early polls, Democrats are revving themselves up for an all-out fight for the Supreme Court and egging on party leadership to do the same.

But as painful, agonizing, even repugnant as it may seem, the smartest and most strategic approach is to do the opposite. Democrats have to engage as little as possible on the nomination.

In other words, the only way for Democrats to win is not to try.

They need to start by confronting a difficult truth: despite the wishful thinking of some activists, Democrats are unlikely to actually delay the Senate confirmation vote past November 3. Numerous senior Senate staffers consulted for this article – and granted anonymity so that they could speak candidly given the tensions inside the party on this issue – confirmed that Democrats can at best be "annoying" in the coming weeks, but cannot create sufficient holdups to run out the clock before the election. Employing arcane tactics like quorum calls and adjournment votes, slowing the hearing process, or withholding unanimous consent might move the calendar back by a matter of days or a week. But this is not exactly "shutting down the Senate," and hardly enough to prevent a pre-election confirmation.

Some may see value in employing those tactics anyway in order to keep the stakes of this fight center stage. But the fight for Ruth Bader Ginsburg's seat was lost, before she passed away, in the 2016 race for the Presidency and the 2018 race to control the Senate, elections that gave Republicans, who have abandoned any fealty to democratic norms, the power.

The question now is whether Democrats can reclaim that power and win the larger fight. Not for this one seat, but for the longer-term and ultimately far more critical goals of having a fair Judiciary, preventing another authoritarian figure like Trump from gaining the Presidency again, and putting the rules of American democracy back on the level, so that Democrats have a fair chance to attain the power that the people's votes would otherwise confer.

These are battles that Democrats can win, but they require winning elections. And a good way to win is to set the terms of what the race is about. The Chinese military philosopher Sun Tzu observed that "those skilled in war bring the enemy to the field of battle and are not brought there by him." That is why President Trump and Republican strategists were so giddy at the prospect of a Supreme Court nomination fight: it gave them their best chance of dragging Democrats onto a field of battle of Republicans' choosing, moving from a set of issues on which they were definitively losing to one that at least gives them a puncher's chance. As Politico bluntly summarized it, "Trump allies [were] buoyed [that] the Supreme Court confirmation fight has taken focus away from the coronavirus outbreak six weeks before the election."

The coronavirus crisis – including the economic dislocation it has caused – and the attendant need for affordable health care coverage is a hands-down winning issue for Joe Biden and the Democrats. It drives turnout from the Democratic "base" by stoking anger at Trump's failures on the issues that progressives rank as their top concern. And it also moves the small segment of remaining swing voters: the sub-groups that lead Biden pollster John Anzalone has named as key drivers of Democrats' improved position in 2020 – including seniors, independents, college-educated voters, and suburbanites.

One need not speculate about whether Democrats can win with this message. They already are. The focus on the nexus of Covid, economic pain, and protecting health coverage has given Joe Biden an incredibly consistent polling lead both nationally and in the swing states (CNN polling guru Harry Enten called them "the steadiest on record").

So why at the very end of the most important American political race in living memory would Democrats allow Republicans to control the issue terrain by getting dragged into a battle over the Supreme Court that they can't win?

The case for engaging in this fight boils down to polls: some showing the Supreme Court as an important issue to Democrats, others showing voters more broadly aligned with Democrats on key Supreme Court issues like abortion as well as the general proposition that the winner of the election should choose the next Justice. Some have also argued that if Senate Democrats don't make a show of contesting the nomination, there will be a dampening effect on base voter enthusiasm.

But the polling case is superficial. It is true that there are polls showing Democrats rating the Supreme Court more highly as a voting issue than Republicans even in the weeks before the death of Justice Ruth Bader Ginsberg. For instance, a Morning Consult headline last month blared that "The Supreme Court Is Becoming More Important for Democratic Voters." But while the accompanying article showed that 57 percent of Democrats in their survey cited the court as a "very important factor," that actually ranked only 10th on a list of important issues to Democrats. The top three? Coronavirus, health care, and the economy.

It is also an almost-universal law of American politics: voters do not care about process. Inside-the-beltway talking points about Senate precedent and rules seem murky at best to them, and at worst seem like silly political games (this is why the staffs of Senators running for president are at such pains to get their candidates to stop talking about bills and hearings and amendments).

Trump's best chance to pull off a come-from-behind win starts with clawing back voters who were previously with him but have drifted away. He won in 2016 on his surprising, unforeseen strength with non-college-educated white voters. Their support has eroded by fourteen points this year. But this group also tends to break heavily his way on polarizing hot-button social issues. That is exactly why Republicans are so excited by the potential for a nomination fight: it draws the attention of the voters they need most onto the issues where they align best.

And it is not just the potential to sway these voters, but also to mobilize them, that has Republicans spoiling for this fight. In the three biggest swing states that determined the election in 2016, Trump has more headroom to grow than Biden because there are more non-college educated white non-voters who can be drawn off the sidelines than demographic groups that favor Democrats. Per NBC News, "In Michigan, Pennsylvania and Wisconsin, where Trump's combined margin of victory was just 77,444 votes, 4.9 million eligible noncollege whites didn't cast ballots in 2016. By contrast, only 1.6 million eligible nonwhites and 1 million eligible college-educated whites didn't vote."

Deciding not to take on a scorched-Earth approach to an illegitimate SCOTUS nomination does not mean Democrats have to meekly roll over. It means acting strategically to win in the long term: first by prevailing in the election, and then by asserting their power afterwards to make meaningful and enduring change.

To win the election, they should de-emphasize the Supreme Court nomination issue in itself, using it only as a pivot back to their winning message: Trump's coronavirus failures and determination to take away your health care. Smart Democrats across the party spectrum have recognized that this is the best approach. Elizabeth Warren said that Democrats need to speak about the nomination in terms of "what's at stake in the lives of millions and millions of families." And Nick Gourevitch, one of the Democrats' leading pollsters, tweeted: "An effective message against Republicans: People are suffering, dying, and out of work. And the GOP just doesn't care. They are doing absolutely nothing about it, instead dropping everything on a political power grab to rush a lifetime appointment through the Supreme Court."

Then, if Democrats manage to win unified control, they must then enact pro-democracy reforms as their very first order of business. As I have argued previously, the best thing Democrats could do to drive the enduring change that they want is to get rid of all of the systemic distortions, vote-suppression, and corruption that has built up under Republican control in recent years.

They already have the blueprints to do this. Democrats made the first act of their new House majority the introduction of the For The People Act of 2019, which would have put in critical structural improvements in three areas: campaign finance, ethics and, most importantly, voting rights. It is sitting on the shelf, ready to go. And just last week they introduced the Protecting Our Democracy Act, 153 pages of steps to wash away the abuses of the Trump administration. There are also ready-to-go plans to clean up the Justice Department and the Federal judiciary. Democrats can even make the pending lawsuit that could undo the Affordable Care Act under a 6-3 Republican Court majority moot with a simple bill (if they win the election).

And what about fixing the government institutions themselves – the Senate and the Supreme Court? The arguments around filibuster reform, expanding the number of seats on the Supreme Court or federal appellate courts, enacting judicial term limits, and other measures are complicated (I happen to favor all of these steps). But none of these things are possible without first being in a position of power. That means winning the election.

This prescription is surely frustrating to many. It requires patience, discipline, and the ability to see the bigger picture. But this is also the best way to turn that frustration into something productive, to strike a lasting blow for democracy and equality that would truly honor everything Ruth Bader Ginsburg stood for.