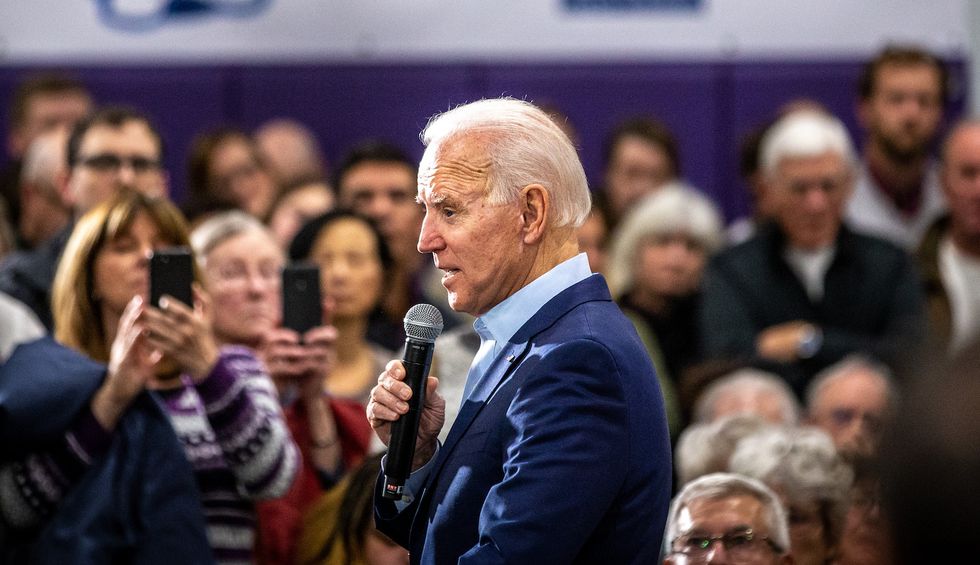 January 4, 2020 — Vice President Joe Biden holds an event with voters in the gymnasium at McKinley Elementary School in Des Moines, where he addressed a number of issues including the recent escalation with Iran. Iowa member of Congress Abby Finkenauer was also on hand to announce her endorsement of Biden. Credit: Phil Roeder // https://creativecommons.org/licenses/by/2.0/
Eleanor Eagan
,
Independent Media Institute
and
Eleanor Eagan
September 16, 2020

The anxiety over changes and irregularities with the United States Postal Service (USPS) in August finally spilled over. A functioning postal service undergirds many of our society’s most basic functions, so there was no shortage of reasons to be alarmed. However, one concern—the threat to November’s election—overwhelmingly rose to the top. And the public outcry over that threat pushed a normally lethargic House majority into action, winning some mild but incomplete reversals from USPS.

USPS is not, however, the only agency where the potent combination of maladministration and outright sabotage may be disenfranchising people, swaying election results, and imposing other hardships. At U.S. Citizenship and Immigration Services (USCIS), a complete failure, or perhaps unwillingness, to adapt to changing conditions during the pandemic slowed new naturalizations such that hundreds of thousands who may have otherwise been able to vote this year will not be able to exercise that long-awaited right. The relative lack of attention to this crisis is a troubling sign that while House Democrats may be willing to ride waves of public anger to modest action, they are still not willing to whip up rage over under-scrutinized but salient abuses of power.

The onset of the global pandemic in March understandably led to upheaval and delays as people and organizations adjusted to a new, tenuous normal. USCIS, however, simply shut down its services for a period of over two months. For more than 70 days, it did not offer naturalization ceremonies or visa and asylum interviews. Despite being pressed by many advocates who were alarmed at these delays, USCIS refused to transition to virtual platforms to continue operations, citing vague supposed legal limitations. The immigration-services company Boundless estimated that each day without naturalization ceremonies translated into “2,100 potential new voters” being disenfranchised.

Since restarting naturalization ceremonies in June, USCIS has cleared the backlog of soon-to-be-citizens who had their ceremonies delayed this spring, but at the expense of hundreds of thousands more who are waiting for theirs to be scheduled. Meanwhile, backlogs in other areas, including new naturalization applications, background checks, and interviews, all remain. As Sarah Pierce of the Migration Policy Institute told FiveThirtyEight, there’s “no way” USCIS could naturalize as many people as it normally would ahead of the election unless it also expedites the processing of other applications. But thanks to budget shortfalls stemming from reduced fee collection, the agency is having to reduce rather than expedite service offerings.

Unfortunately, time to even marginally rectify this widespread disenfranchisement is running out. There is less than two months remaining before the election, leaving scant time for applications to be processed, ceremonies to be held, and voter registrations to be submitted.

It should not be overlooked that this outcome—the disenfranchisement of hundreds of thousands of new immigrants—fits pretty neatly into Trump’s anti-immigrant agenda. These extreme delays due to the pandemic are also coming on the tail end of several years of rising wait times at Trump’s USCIS. So while it’s possible that this unfortunate series of events is the result of incompetence, it hardly seems probable.

You might think that Democratic lawmakers would take note of these opportunistic attacks—especially in light of immense outpourings of energy over the last several years in response to anti-immigrant assaults like the Muslim ban and family separation. Yet, House Democrats’ response can only be described as muted. Yes, the House Judiciary Committee held some hearings with USCIS leadership (which is more than what can be said for many committees), but at no point was it clear that this was a top priority around which they were organizing a serious opposition effort. And it is likely that it is Speaker Nancy Pelosi, with whom House Judiciary Chairman Jerry Nadler has been fighting unsuccessfully in pursuit of an oversight mandate, who is restraining the Judiciary Committee.

What might a more energetic effort have entailed? First and foremost, lawmakers needed to raise the profile of this issue outside of the hearing room. This is not to suggest that congressional hearings do not have value—we have regularly argued exactly the opposite—but to say that they are but one of many potential tools. By, for example, leaning on celebrities, lawmakers could have increased national attention to the delays and generated more interest in their efforts to combat them. Similarly, by reaching out to community, religious, and labor leaders, Democrats might have been able to offer assurances that grassroots opposition would be met with encouragement and action from those in power.

Additionally, by signaling a willingness to open impeachment proceedings for those willfully blocking new naturalizations, lawmakers could have simultaneously underlined their seriousness to recalcitrant government officials and the public. By ratcheting up the stakes, lawmakers could have captured public attention in this period of information overload.

Of course, some will argue that impeachment is too severe a response for this manner of transgression. And to those people I say, why stop with the scandal at USCIS? Whether it’s Trump or his army of loyal appointees, there is no shortage of solid ground from which to launch impeachment proceedings. Congress could threaten to impeach Trump and his appointees for undermining independent journalism at Voice of America and other government-funded media.

Or they could impeach him for denying congressional leaders access to intelligence on Trump’s illegal electioneering support from international authoritarians. Or for the glittery, firework-heavy Hatch Act violation that took place when the Republican National Convention event was held on the White House lawn in August.

Following the Trump administration’s attacks on the postal service, public pressure roused Democratic lawmakers into action. Their tentative first steps on USPS oversight have been encouraging, but the relative lack of resistance to the problems at USCIS points to where they can still improve. People’s attention at the moment is understandably scattered between public health crises, natural disasters, police brutality and the protests against it, and the administration’s horrific response to it all. But lawmakers are not helpless in the face of this overload. It is the job of our leaders to connect disparate, ephemeral scandals into a single, interconnected narrative: Trump is severely mismanaging the components of government needed to keep ordinary people safe while focusing his efforts on seizing control of components that can help him hold onto power.

Pursuing these inquiries is not just a matter of good messaging; understanding the extent of damage to these institutions will be a prerequisite to fixing them under a Biden administration. By carefully assessing the deficits in resources and personnel that have stemmed from Trumpian mismanagement and meticulously cataloging the policies and changes that will need to be reversed, Congress can ease a transition process and make way for effective executive branch governance from day one. In order to do so, however, Congress can’t merely wait for the public to take interest in the infrastructural minutiae of executive branch governance; it must proactively lead the way.

It is long past time that the House majority recognizes that it has a tremendous platform from which it can not only respond to people’s demands but guide attention and opposition to problems that are otherwise being subsumed amid the chaos.

Eleanor Eagan is a research assistant at the Revolving Door Project.