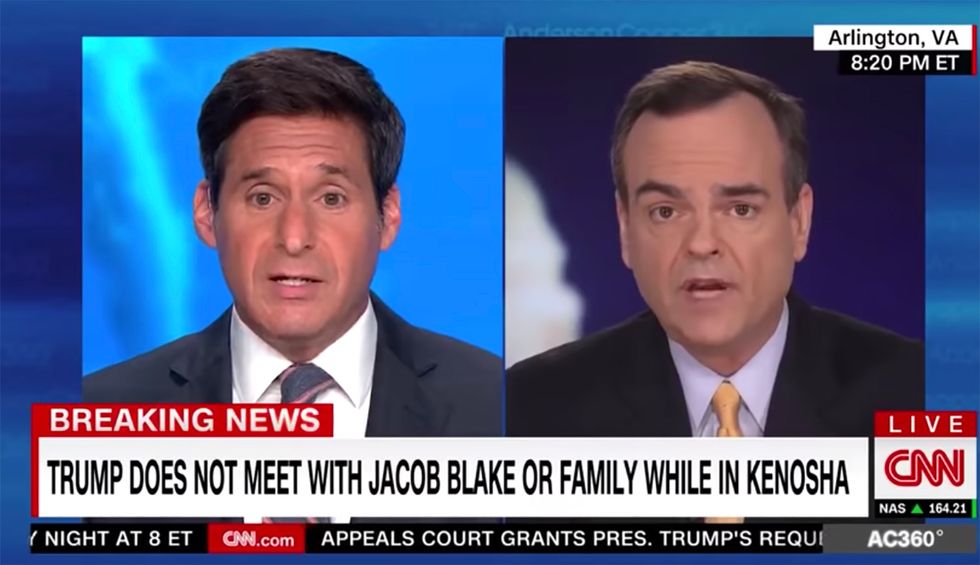 “Tim, what specifically is he talking about there?” asked Berman.

“I don’t have access to the same information the president has,” said Murtaugh. “But John, let me ask you a question about this. The people we saw harassing folks outside the White House in Washington Thursday night, those people knew the names of regular Americans coming out of the White House—”

“Someone is organizing these trips,” insisted Murtaugh. “Someone is transporting these people from other states into these other cities.”

“Tim, can you give me — can you give me one piece of evidence that there was any flight carrying these people that the president is describing?” said Berman over Murtaugh’s repeated interruptions. “I’ll state once again. He’s the commander in chief. He controls the military. When he says something about this, when he presents the idea of, again, this airborne assault, whether it be coming to Washington or leaving Washington, it’s important. And all I want to know if it’s in any way tethered to reality. Did it happen?”

“Tim, Tim, Tim, stop, stop, let me ask a question here,” said Berman. “As you have so far not confirmed any specific flight either coming to or leaving Washington the president mentioned, let me point out to you that this mirrors this conspiracy theory circulating online since June, a police department looked into this idea people are being moved around the country in flights wearing all kinds of black t-shirts. Is it possible the president read this and he’s just regurgitating and getting details wrong? Is that possible?”

“Look, Rand Paul told a similar story and congressional hearings have been called into look into who is funding outrageous riots, by the way, Joe Biden has not identified as left wing riots because that’s what they are,” said Murtaugh. “He’s too weak to stand up to the left wing of his party and denounce these riots for what they are, because he’s absolutely in the control of the anti-police wing of today’s Democrat [sic] Party.”

“None of that addresses — Tim, you’ve got no proof,” said Berman, finally losing patience and ending the interview. “Call us when you have information about these flights that the president has mentioned twice.”