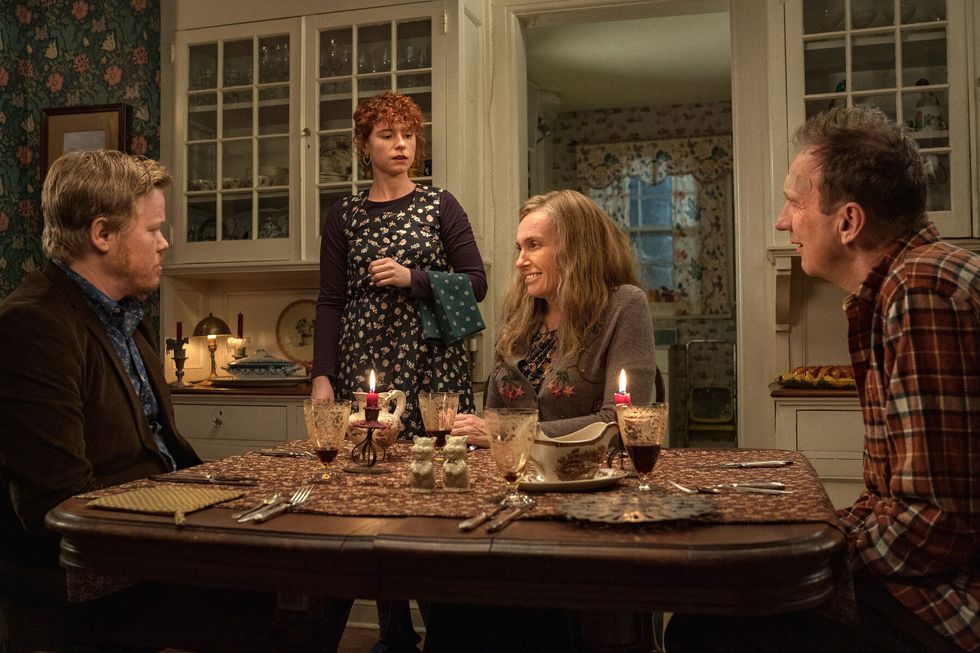 Gary M. Kramer
,
Salon
and
Gary M. Kramer
September 04, 2020
Charlie Kaufman's films — "Being John Malkovich," "Adaptation.," and "Eternal Sunshine of the Spotless Mind," which he wrote, and "Synecdoche, New York," and "Anomalisa," which he directed — are cheeky and depressing headscratchers. They feature doppelgangers and time loops that allow the characters (and by extension audiences) to re-evaluate things from different perspectives.

These themes are in evidence once again in his ambitious and curious but not entirely successful new Netflix film, "I'm Thinking of Ending Things." Adapted from Iain Reid's novel, this long (135 minutes), stagy drama has the deceptively simple plot of an unnamed young woman (Jessie Buckley) — call her Louisa, as one character does — going on a road trip with her boyfriend Jake (Jesse Plemons) to visit his parents at their farm. But what transpires is far more complicated. Louisa is trapped in liminal space, an emotional state where she is considering breaking up with Jake as the title indicates. She could also very well be contemplating suicide, as the title further suggests.

Kaufman shrewdly lets viewers decide for themselves, and his film is full of clues and conundrums. What is real or not is irrelevant. The tone here is deep melancholy throughout. With bleak, heartbreaking images of isolation and desolation, either reading is possible. And while some viewers will be spellbound as Louisa experiences thoughts of anxiety and despair, others are sure to rate this film as an endurance test. Again, both interpretations are plausible.

The film begins in earnest with Louisa and Jake driving off in his car as snow gently falls. As they talk in hesitant ways, almost afraid of offending the other, the windshield wipers mark time like a metronome. He reads her mood and can almost read her mind as she contemplates "ending things." He encourages her to recite a poem, "Bone Dog," which is brilliant and full of vivid, depressing images, such as "The sun goes up and down like a tired whore." Their talk turns philosophical, but it ends abruptly with their arrival at Jake's family home.

So far, so good. Twenty minutes have passed in this car ride, and Kaufman has signified the remoteness of their relatively new (and possibly ending) relationship by framing Louisa and Jake separately. He also crosscuts their conversation with scenes of a high school janitor (Guy Boyd), a character who takes on greater importance as the film unfolds, going about his daily routine. 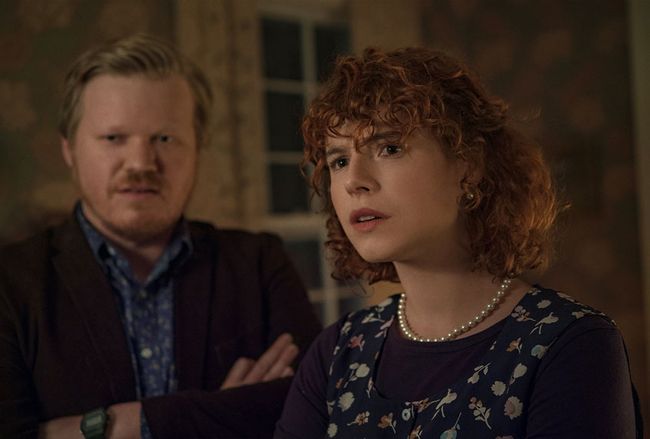 Once at the farm, "I'm Thinking of Ending Things" gets a bit strange. Jake is reluctant to enter the house and takes Louisa to the barn instead. He tells her a story about a pig eaten by maggots. Upon entering the house, Jake's parents (Toni Collette and David Thewlis) take their time coming downstairs, which is awkward. The dinner that follows is practically theater of the absurd.

Kaufman employs all his patented tricks during the hour or so spent inside the house. Viewers will share Louisa's discomfort as she explains her artwork, quantum physics, and how she and Jake met. Jake is frustrated by his mom repeatedly confusing the words "genius" and "genus" when referring to Trivial Pursuit. Things soon spin out of control.

"I'm Thinking of Ending Things" starts to make subtle shifts in time, and even dress. Keep an eye on the color story being told, and in one sequence, Louisa is seen wearing pearls, which she had not had on before. She has an encounter with Jake's father in Jake's childhood bedroom where he is significantly older and suffering from Alzheimer's or dementia. Mom is an invalid in some scenes, and a chipper housewife in another. These digressions are like dreams, but they very well may be real. Or not. Kaufman is not telling.

There are others scenes that confound, such as one involving the janitor watching a fake Robert Zemeckis film. This episode, like those in the farm section of the film, stalls a narrative that already lacks momentum. As Louisa repeatedly pleads to return home, additional delays occur, causing her (and by extension, the viewer) greater despair. And when she later tells herself, "This is the last time I will be with Jake," she is more uncertain than convincing.

What does all of this amount to? It is uncertain. Louisa is patient and polite towards Jake's parents, enduring their peculiar behavior, and hoping to make a good impression, but she obviously would rather be anywhere else. (Viewers will likely share this emotion). Jessie Buckley has these tiny creases on both sides of her mouth that resemble parentheses, and it is fun (and not inappropriate) to imagine that everything she says reveals a thought she is having that is incidental or supplementary to the conversation happening at the time. (Remember, she is nameless, so possibly imaginary or fictitious). Consider her monologue on the drive home, where an unexpected reference to "A Woman Under the Influence" results in Louisa reciting Pauline Kael's critical review of the film and Gena Rowland's celebrated performance.

"I'm Thinking of Ending Things" is full of such textual references. Jake cites David Foster Wallace, and initiates a discussion of him being known more for his suicide than his writing. There is an exchange about "Baby, It's Cold Outside" being a rapey song, and Guy Debord's "The Society of the Spectacle," is mentioned as well. One does not need to know these cultural touchstones to appreciate Kaufman's depiction of the relationship between Louisa and Jake, but, of course, it helps.

What is clear (sort of) is that the car rides that bookend the dinner — along with the various time-jumping episodes in the farmhouse section of the film — show the different tints, colors, moods, and textures of these characters as they present different sides of themselves. They are hiding their true natures and feelings even with people they love, or think they love, or may not love. Jake's anger towards his mother masks his own shame. His mother's tinnitus suggests a deeper, more troubling pain. Dad's forgetfulness may be his coping mechanism. Louisa's confusion reflects her own equivocation.

And had "I'm Thinking of Ending Things" ended there, Kaufman's film might have been a masterpiece. Alas, it continues, and the last hour gets really existential and weird.

On the ride home during a treacherous snowstorm, Jake insists on stopping for an ice cream, an experience that has a surreal quality to it. Things get stranger still when a detour to the high school leads to more doppelgangers, a truly disturbing janitor sequence, and a reference to "Oklahoma!" (not the film's first). These are all compelling set-pieces, but they fail to deliver an emotional impact because everything feels so detached, so removed, so nightmarish/dreamlike. The film ultimately feels like Kaufman is shaking a snow globe and randomly presenting different possible stories featuring the main characters in various periods of their lives. Nothing feels connected, least of all the characters.

Nevertheless, Jessie Buckley is fantastic, conveying her wavering emotions with the slightest expression. Buckley is so fully invested in Louisa that viewers wince for her during the more discomfiting moments. As Jake, Plemons is appropriately sanguine. He is touchy in his mother's presence and tetchy in Louisa's. It, too, is a finely calibrated performance. In support, Toni Collette overacts, deliberately and effectively, while David Thewlis makes each verision of the character he plays interesting.

Ultimately, "I'm Thinking of Ending Things" is as provocative as it is exasperating. It may require repeated viewings to understand everything Kaufman is trying to achieve — Guy Boyd's janitor remains largely an enigma — but the prospect of sitting through this film twice just feels excruciating.