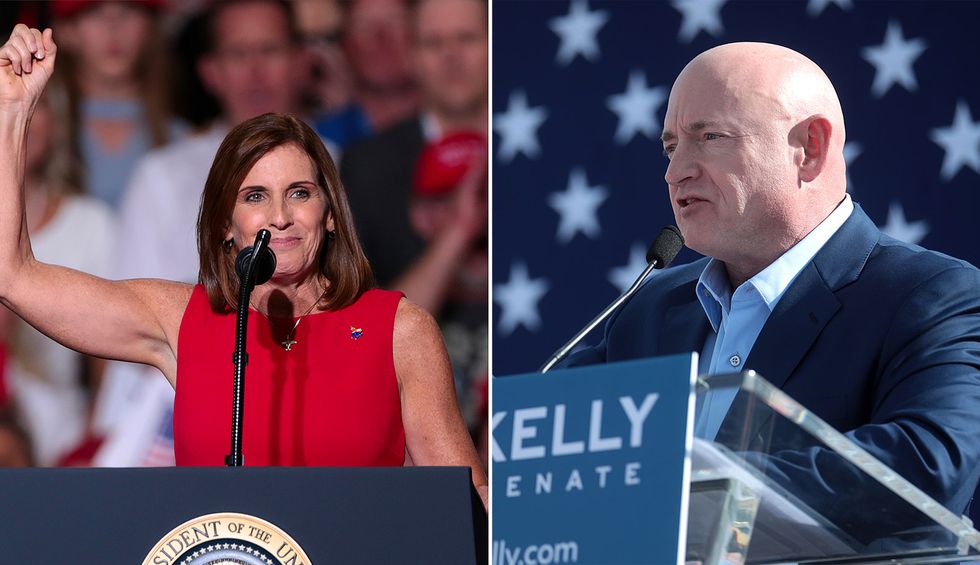 The Arizona Senate race took on a new significance after the death of Supreme Court Justice Ruth Bader Ginsburg, giving Democrats a glimmer of hope that they can block President Donald Trump's nominee to replace her on the bench.

Sen. Martha McSally, R-Ariz., was appointed to the seat previously held by the late Sen. John McCain after losing her own Senate race to Sen. Kyrsten Sinema, D-Ariz., in 2018. Because McSally was appointed, her race is technically a special election, and the winner of the race could be sworn in as soon as results are certified. Such a scenario could take place as early as Nov. 30, according to the Associated Press.

Former astronaut Mark Kelly has led McSally in 12 straight polls, including all but one poll since July 1, according to FiveThirthyEight. Kelly could potentially give Democrats an additional vote in their fight to prevent Republicans from confirming Ginsburg's replacement before Inauguration Day, depending on how the timing plays out.

Senate Majority Leader Mitch McConnell, R-Ky., who blocked former President Barack Obama's Supreme Court nominee 11 months ahead of the 2016 election, announced on Friday that the Senate would vote on Trump's nominee despite Ginsburg's dying wish that she "not be replaced until a new president is installed."

Trump on Monday said that he would announce his nominee by Friday or Saturday in hopes she will be confirmed by the election. Trump said his shortlist is down to five people, though he is widely expected to nominate Judge Amy Coney Barrett, a former clerk for Justice Antonin Scalia who has drawn concerns among Democrats for her criticism of Roe v. Wade.

Though Republicans hold a 53-seat majority in the Senate, they have already seen some defections. Sen. Lisa Murkowski, R-Alaska, said in a statement that she opposes taking up the vacancy ahead of the election. However, the senator made no mention of whether she would oppose a confirmation during the lame-duck session following the election.

Sen. Susan Collins, R-Maine, said she opposes taking up the nomination ahead of the election, but would support whomever the winner of the election nominates.

A third defection would likely result in a tie that would be broken by Vice President Mike Pence, while a fourth defection would doom the nominee. If the fight stretches into November, Kelly could replace McSally before the vote.

Kelly called for Ginsburg's replacement to be decided by the winner of the election.

"When it comes to making a lifetime appointment to the Supreme Court, Washington shouldn't rush that process for political purposes," he said in a statement. "This is a decision that will impact Arizonans, especially with an upcoming case about health care and protections for pre-existing conditions. Arizonans will begin casting their ballots in a few weeks, and I believe the people elected to the presidency and Senate in November should fill this vacancy."

Arizona law requires the election to be certified by Nov. 30, which could be delayed by up to three days if results are held up. Former Arizona Solicitor General Mary O'Grady told the AP that those deadlines are firm.

It is unclear whether the Senate or Republican Gov. Doug Ducey can do anything to delay the certification.

"We'd given this no thought prior to yesterday's news," Daniel Scarpinato, Ducey's chief of staff, told The New York Times. "This all seemed theoretical. Now it is not. At first blush, it appears we have a limited role. But we are going to research the law, and we are going to follow it."

Former Republican Party lawyer Timothy LaSota predicted their may be "some legal wrangling if it's close."

"But if it's not close, there won't be," he added. "There has to be a close race that's important enough for people to fight over."

Kelly, the husband of former Rep. Gabby Giffords, D-Ariz., leads McSally by an average of 6.7%, according to RealClearPolitics, and has outraised her by $46 million to $30 million.