Alaska mining exec steps down after being caught on Zoom boasting about his ties to Republican politicians: report 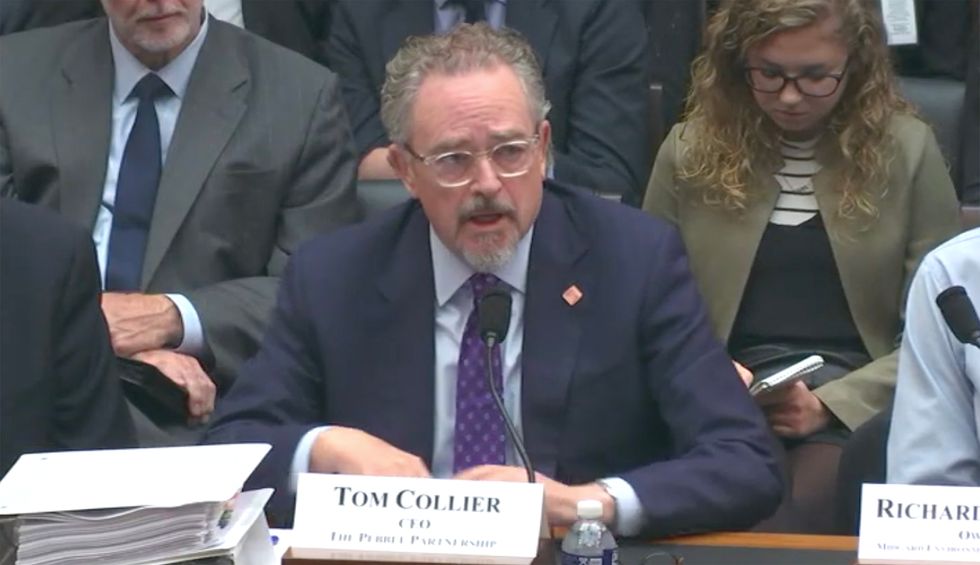 Tom Collier, a mining executive in Alaska, has been boasting about his relationship with Republican politicians — and some Democratic politicians as well. That boasting, according to the Washington Post, has led to his resignation.

Collier, the Post’s Juliet Eilperin reports, stepped down as CEO of Pebble Limited Partnership on September 23, which was the day after the Environmental Investigation Agency released recordings of Zoom conversations in which Collier “talked of currying favor with the White House and Alaska lawmakers to win federal approval for a massive gold and copper mine.”

In Alaska, a red state, there has been a lot of debate about the environmental impact of a mining project that Collier was pushing for.

Eilperin explains, “Collier and Ronald Thiessen, CEO of the Canadian parent company, Northern Dynasty Minerals, were recorded separately suggesting that GOP politicians would not block Pebble Mine even though some had raised concerns about its environmental impact. Collier…. stood to receive $12.4 million in bonuses if the federal government approved a key permit for the mine and it could be upheld in court. Speaking to EIA investigators, who were posing as possible investors in the project, he touted his effort to funnel money to Republican politicians in Alaska and defeat those who sided with Democrats against the mine.”

Collier, according to Eilperin, told the EIA investigators, “I’ve supported all the Republican candidates in the state. I meet with the two senators, the congressman, the governor on a regular basis — and they welcome me as someone they know supports the Republican Party. Now, having said that, it’s entirely possible that we may have (former Vice President Joe) Biden as a president, and if we do, I’m gonna brush off my Democratic credentials and start using them a little more actively than I do.”

During the 1990s, Collier — who is registered as an independent —  served as chief of staff to Bruce Babbitt, secretary of the interior under President Bill Clinton. Babbitt, a centrist Democrat, was elected governor of Arizona in 1977 and sought the Democratic presidential nomination in 1988.

In an official statement, Northern Dynasty Minerals said that Collier “has submitted his resignation in light of comments made about elected and regulatory officials in Alaska in private conversations covertly videotaped by an environmental activist group.”