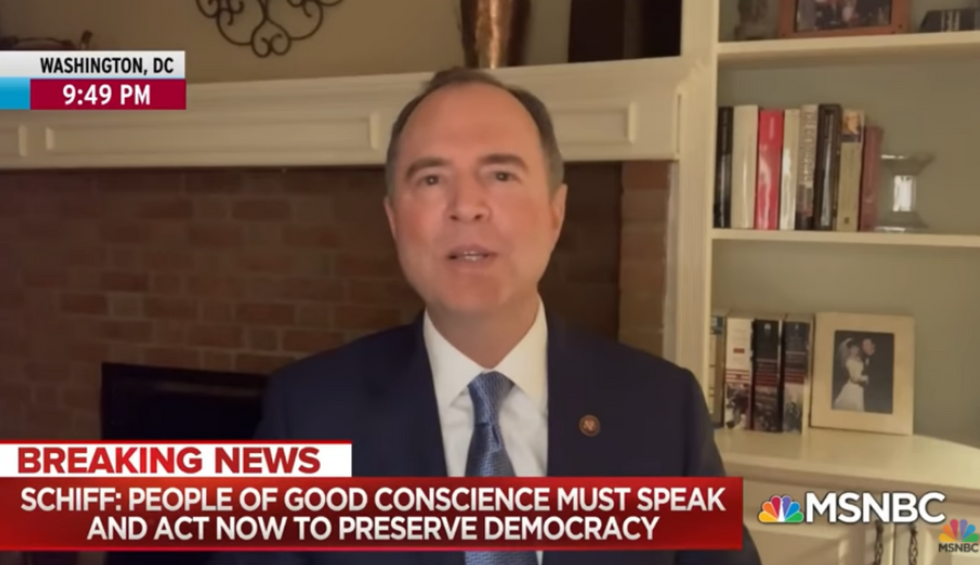 When Schiff appeared on MSNBC with host Rachel Maddow that evening, he made gave Republicans and members of Trump's administration an ultimatum as he insisted those "of good conscience" should resign now. According to Schiff, Republicans cannot properly serve the country while doing Trump's bidding.

“This is a moment that I would say to any Republican of good conscience working in the administration, it is time for you to resign," Schiff told MSNBC's Rachel Maddow on Wednesday night. "If you have been debating about whether you can continue to serve the country by serving this president, you can’t. It is time to resign."

With a sense of urgency, Schiff stressed the importance of acting quickly.

"I would say to those who have been on the sidelines maintaining a dignified silence who have served in the administration in the past, you cannot maintain your silence any longer. You have to maintain dignified speech now. You have to speak out," Schiff continued. "Do not wait until after the election, do not wait until we have the chaos the president wants after the election when he seeks to, as he said, 'get rid of the ballots.' Because if you do wait and know what is to come, you will share some of the burden and responsibility for the chaos that comes.”

Schiff's remarks came shortly after Trump insinuated that he might not accept the outcome of the election. When asked if he would commit to a peaceful transfer of power, he demurred. He continued pushing his baseless claims of voter fraud and alluded to getting "rid of the ballots."

"Win, lose, or draw in this election, will you commit here today for a peaceful transferal of power after the election?” White House correspondent Brian Kiram asked.

Trump refused to directly answer the question but ultimately would not commit to a peaceful transfer of power. The president expressed concern about "ballots" and said there "won't be a transfer," but rather, "a continuation."

“Well, we’re going to have to see what happens. You know that I’ve been complaining very strongly about the ballots and the ballots are a disaster — " Trump said before being cut off.

“I understand that, but people are rioting, do you commit to making sure that there’s a peaceful transferral of power?” the reporter pressed.

Reporter: "Win, lose or draw in this election, will you commit here today for a peaceful transferal of power after… https://t.co/QdlzqKsxDX
— NBC News (@NBC News)1600901595.0

Like Schiff, others have also expressed deep concern about Trump's remarks and what it could mean for not only the election but the future of America and its democracy.