Would Republicans fill a Supreme Court vacancy even during Trump's last weeks? Of course they would 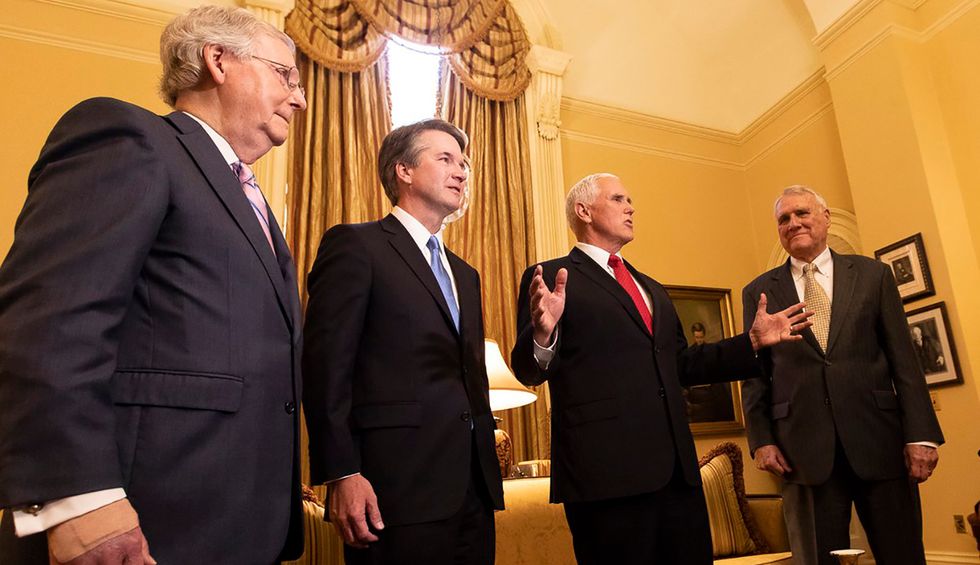 Honored to escort Judge Brett Kavanaugh to the Capitol for meetings with members of the Senate. We hope and trust that the Senate will give a strong vote confirming Judge Kavanaugh as the newest justice to the Supreme Court.
Hunter
and
Daily Kos
August 03, 2020

When Supreme Court Justice Antonin Scalia died in February of 2016, Senate Republicans discovered a heretofore unidentified, now-infamous caveat to President Barack Obama's constitutional powers: Black presidents aren't allowed to fill vacant Supreme Court seats during an election year. The Senate refused to even consider the nomination of Merrick Garland, who was put forward by Obama for the role; instead, the seat was simply left vacant for the duration of Obama's term. When Republican Trump was installed as president the next year, the Senate swiftly confirmed his own conservative nominee.

Senate Majority Leader Mitch McConnell and fawning Trump golf partner Sen. Lindsey Graham, among others, have not been shy in declaring that the previously made-up rule no longer applies under Trump. On the contrary, they say the Senate would move swiftly to confirm any last-minute nominees if a vacancy were to arise in the last months of Trump's calamitous term. The recent diagnosis of liberal court icon Justice Ruth Bader Ginsburg with liver cancer (she is by all accounts being successfully treated) is putting new focus on these Republican court-packing inventions and un-inventions—and is pushing Democratic senators to more seriously consider expanding the court to rebalance it in the face of blatant Republican sabotages.

Whether Democratic senators will have the guts to actually do the thing remains an open question. But Sen. Tim Kaine—not exactly a liberal firebreather—is among those now open to expanding the Supreme Court if McConnell, Graham, and the others are insistent on undoing their own supposed ban on election-year nominees, notes NBC:

"If they show that they're unwilling to respect precedent, rules and history, then they can't feign surprise when others talk about using a statutory option that we have that's fully constitutional in our availability."

Unfortunately, that is phrased as a threat that depends on if Republicans go any further than they already have, rather than an observation about just how far they have already gone. The Democratic National Committee may go farther; they’re planning to make a call for "structural" court reforms part of the party platform.

The current Supreme Court has lost its legitimacy, and for structural rather than ideological reasons. The blocking of an Obama justice under a newly invented partisan rule that was discarded immediately afterwards put Neil Gorsuch on the court illegitimately; the Republican Senate's role in hiding evidence during Brett Kavanaugh's confirmation hearings was a near-perfect runup to the fiasco of discarded impeachment charges against Trump, not because anyone was willing to argue that Trump did not do the political extortion he was charged with but because Republican senators declared they simply did not wish to hear any evidence either way. The court is a product of the same Republican corruption that has debased the rest of Washington, and the nation. The party broke it.

“It would be very dangerous for Americans to begin to believe the Supreme Court was not the legitimate arbiter of our nation's laws,” we often hear. True, but that ship has sailed. The Supreme Court is a parody of itself already; you cannot even make good money making bets as to which conservative justices will discard their own precedents and proclamations to bend each new argument towards the preferred "conservative" outcome, because everybody else also knows that the core of conservative justices will make those flips of logic whenever the need arises. Pointing it out is now a consistent feature—and perhaps the most consistent feature—of non-conservative dissents.

It is true that Trump replacing any Supreme Court position in the next few months would quickly blossom into yet another crisis of government as the Senate swiftly erased whatever self-declared impediments were thrown up in the past, the whole of America watched it happen, and a good chunk of America came to the conclusion that the Supreme Court was now simply a structural appendage of the Republican Party. Again, though: ship, sailed. Watching the Kavanaugh nomination and listening to McConnell's unending carousel of new-rules-that-are-not, does anyone think the Supreme Court is not that appendage right now?