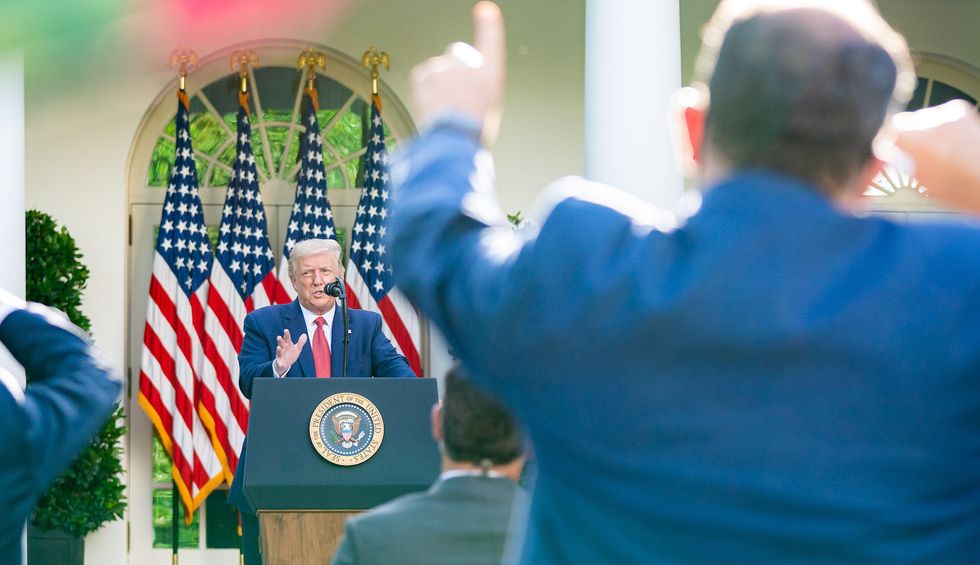 The chief actuary for Social Security has grim news for Trump supporters on Social Security: There wouldn't be any more of it before his second term ended if he gets his way on the payroll tax. His plan to eliminate payroll taxes would deplete the Social Security Trust Fund by 2023, "with no ability to pay benefits thereafter." That’s the "Old Age and Survivors Insurance" portion of the fund. The Disability Insurance Trust Fund would be gone next year.

Stephen Goss, the chief actuary, detailed this in a letter in response to a query from Democratic Sens. Chuck Schumer (New York), Ron Wyden (Oregon), Chris Van Hollen (Maryland), and independent Bernie Sanders (Vermont) about hypothetical legislation passed by Congress to enact Trump’s plan to defund Social Security. This is what would happen in Trump's plan to "terminate" payroll taxes permanently in his second term. Trump announced this plan when he signed his executive order to allow employers to suspend taking payroll taxes out of employees’ pay. That order was so poorly conceived and executed that employers are having a hard time figuring out whether or not to do it, which bodes poorly for what would happen if Trump were given a second term and a chance to see his vision through.

CNBC reports: "Payroll companies, the U.S. Chamber of Commerce and other business associations say it would be difficult to implement the deferral. They’re concerned about the liability employers and employees may face." Which bodes poorly for saving the programs if Trump gets his way. Or if Republicans retake Congress. Goss wrote this under the specification from the senators that "there would be no other changes to current law." Legislation could create some kind of funding stream for the programs, but that part of it clearly hasn't been figured out by team Trump, which hasn't even figured out how to explain what Trump actually means when he says "terminate" the payroll tax.

Nancy Altman, president of Social Security Works, makes a key point. While analysis is based on hypothetical legislation that would do what Trump says he wants to do, which is get rid of the payroll tax, "in fact, Trump is claiming the authority to defund Social Security with no action from Congress whatsoever." Trump is exerting the power, and believes he has the power, to do this on his own.

In his order, Altman continues, "Trump claimed the authority to unilaterally stop collection of Social Security’s dedicated funding under 26 U.S Code §7508A upon his declaring a federal emergency." There's Trump acting with the unitary executive power he feels Senate Republicans granted him when they refused to impeach him. "The law permits deferral for up to a year," Altman explains, "long enough to defund and destroy Social Security disability insurance. If he declared additional emergencies through 2023, he could, on his own, end all of Social Security."

Given Trump's willingness to destroy the U.S. Postal Service, an institution that predates the Constitution and even predates American independence, he's not going to hold Social Security sacred. He holds nothing sacred—not even human life, as his response to the pandemic has made abundantly clear.

So when the chief actuary of Social Security tells us that Social Security would be dead and gone before the end of Trump's second term, it's not alarmist. It's a statement of fact.