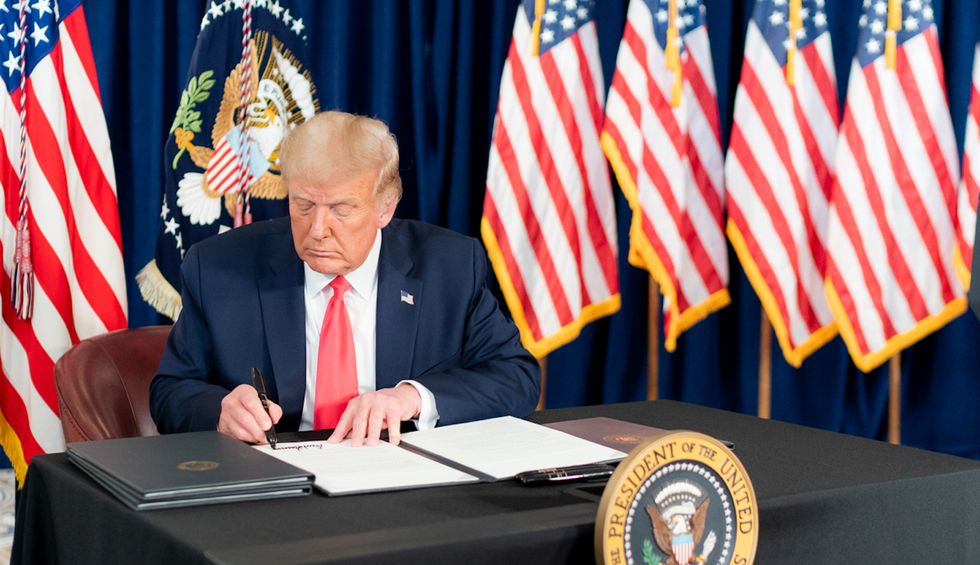 As we went into the weekend, Senate Majority Leader Mitch McConnell had washed his hands of the negotiations over the vitally necessary COVID-19 relief package, leaving Treasury Secretary Steve Mnuchin and former Tea Party zealot turned White House chief of staff Mark Meadows to try to hash out a deal. Word was that the Democrats had come down from their demand for $3 trillion in various relief programs to $2 trillion, while the White House stuck to its offer of $1 trillion and not a penny more. By Friday, the Senate was going home and the talks had irretrievably stalled.

Then along came an unmasked superhero to the rescue. President Trump announced he was personally taking charge and would sign several executive orders to save the unemployed and rescue the economy. If you didn't know better, you might even think his henchmen Mnuchin and Meadows had blown up the talks just so the boss could sail in and save the day with his strong, powerful executive action.

You'd think he would have done this with a formal White House address, perhaps even a primetime speech. Instead, he held a Saturday afternoon "press conference" at his private New Jersey golf resort in front of an unruly, possibly buzzed crowd of paying customers clad in golf gear, as if it were one of his precious campaign rallies. As a TV event, it was a dud. As an economic rescue it was even worse.

[Trump has ordered] a payroll tax deferral, not a cut, meaning the taxes won't be collected for a while but they will still be due at a later date. On housing, he instructs key officials to "consider" whether there should be a ban on evictions. He also insists that state governments pick up the tab for some of the unemployment aid.

Furthermore, Trump promised that if he is re-elected, he will make sure no one has to pay back the deferred payroll taxes, and suggested he'd like to terminate the tax altogether. That indicates he'd also like to "terminate" Social Security and Medicare, which are primarily funded through payroll taxes, although he may be too ignorant about how the government works to know that. (There's no doubt that Meadows, a hardcore Social Security antagonist, understands that very well.)

The unemployment part is confusing. Apparently Trump wants to take money from other sources to give unemployed people $300 a week (that's down from $600), but only if states can put up another $100 — unless Trump decides that certain states are exempt. Moreover, the plan will apparently require states to retool their unemployment systems, which under these conditions they simply won't be able to do.

Larry Kudlow seems to be very confused about how much money unemployed people would actually receive under Trump's… https://t.co/hOMXVulw8D
— Aaron Rupar (@Aaron Rupar) 1596981010.0

Never mind. It's obvious that nobody really knows how it's supposed to work.

Economist and New York Times columnist Paul Krugman laid it all out on CNN, calling the payroll tax deferral "the hydroxychloroquine of tax policy":

... a known quack remedy that everybody who knows anything has said is useless and dangerous, including Republicans who are contemptuous about the thing. And yet here it is as the centerpiece of his plan to rescue the economy. So take the two of them together, an unworkable unemployment plan and a probably destructive payroll tax plan, and all of this on top of what are already really problematic negotiations between Republicans and Democrats.

Trump spent the first part of his rally speech railing against Democrats for wanting to give relief to states and localities. He characterizes this demand as a giveaway to "Democrat states" that have been run poorly for decades. This was the major sticking point in the negotiations that Mnuchin and Meadows have refused to even consider.

Of course this is nonsense. According to NPR, most of the 50 states, not just "Democrat states," are in economic distress if not dire peril. (Even Trump's favorite governor, Florida's Ron DeSantis, compared his state's budget cuts to the Red Wedding scene in "Game of Thrones.")

As for these blue states being badly run and therefore unworthy of federal help, consider California, the largest such example. I would guess that state's residents would gladly put their economic performance up against Trump's any day. Before the virus hit, California had a $7 billion surplus, which is gone now thanks to the pandemic.

Krugman addressed the looming crisis if the federal government doesn't step in with badly needed aid:

Two things are about to hit us. There will be a collapse of consumer demand because people are not getting their unemployment benefits and we're going to see a collapse of government spending at the state and local level because the states and cities are running out of money. Put all that together and the numbers are shockingly big.

I kept thinking, how big can this be compared with the coronavirus and the answer is we're looking at a second shock that is pretty close in size to what the pandemic did. ... The Democrats had a bill three months ago. But because Republican leaders allowed things to drift, now time has run out.

Recall that Trump initially believed the pandemic was only affecting blue states, so his smart political play was to do nothing and blame Democratic governors for all the death and destruction. Perhaps he thinks that was such a wildly successful strategy that he's going to do it again with the economy. But since there are plenty of Republican-led states that need that money too, it seems as if this obsession with refusing to help state and local governments isn't an electoral strategy at all. It's purely emotional. He wants to hurt his political enemies, and if that means he hurts his own voters as well, he's fine with that.

Trump's ploy is legally complicated and almost certainly unconstitutional. The executive branch is not empowered to spend money as it chooses, or to change tax policy on a whim. Or that is, at least it hasn't been until now. But Trump knows that the legal system moves slowly and the election is just weeks away, so he figures he can play savior without any consequences. His orders are so economically destructive and the power grab so blatant that it's possible Republican senators will come back to the table and negotiate, instead of just trying to dictate terms. Their majority is at stake too.

But let's be clear about what happened here. The man who sold himself to America as the greatest dealmaker the world has ever known can't bargain his way out of a paper bag. He walks away, holds his breath until he turns blue and then lets the other side decide if they're going to let him take the country down with him.

That's the art of the tantrum, not the art of the deal. He's quite good at it. Let's just hope the Republicans in Congress still have some sense of self-preservation and are willing to work something out to save the country. Otherwise we are in for a simply disastrous fall.