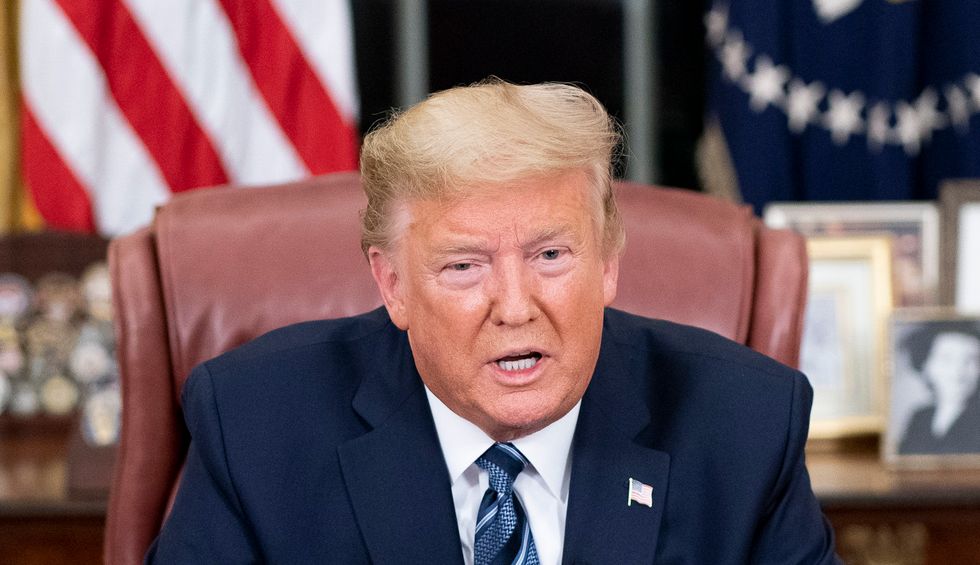 In a tweet Monday morning, Trump hailed the "record high Nasdaq" and warned "it would all come crashing down, including your Jobs, Stocks, and 401k's, if Sleepy Joe [Biden] ever became president."

The president didn't mention that the jobless rate under his leadership is already at historic highs—last week marked the 19th consecutive week that "unemployment claims have been more than twice the worst week of the Great Recession," according to the Economic Policy Institute.

"Tweeting this during the worst economic downturn in 70 years, a housing, hunger, and healthcare crisis, and days after extended [unemployment insurance] benefits expired because of the Senate GOP, is both shameful and shameless," Rep. Jan Schakowsky (D-Ill.) wrote in response to the president's boast.

Tweeting this during the worst economic downturn in 70 years, a housing, hunger, and healthcare crisis, and days af… https://t.co/3mjzQQWZ8B
— Jan Schakowsky (@Jan Schakowsky) 1596470159.0

Trump's tweet came as the prospect of a deal between Democratic negotiators and the White House to extend the enhanced unemployment benefits at any level appeared as slim as ever.

The Washington Post reported that with relief talks at an impasse, "the Trump administration is looking at options for unilateral actions it can take to try to address some of the economic fallout caused by the novel coronavirus pandemic."

"It's not clear what steps the administration could take without the help of Congress on issues such as lapsed enhanced unemployment benefits or the expired moratorium on evictions," the Post noted.

Many congressional Republicans, meanwhile, have shown little interest in extending the boosted unemployment benefits even as coronavirus cases continue to surge and tens of millions of Americans struggle to afford food and rent.

The American Prospect's David Dayen argued Monday that the GOP's lack of urgency in the middle of worsening public health and economic crises stems from the fact that Republicans already secured the bailout they really wanted in March, when Congress approved a $4.5 trillion "slush fund" for big corporations.

"The suffering on Wall Street has been lifted," Dayen wrote. "On the day that expanded unemployment benefits expired last Friday, the stock market rose. It's back up again today. As we know, this is the cause of an ironclad vow from the Federal Reserve to do whatever it takes to protect asset prices, and a $4.5 trillion money cannon facilitated by Congress to back up the promise."

"The corporate bailout was the rescue Republicans wanted," Dayen added. "It was valuable to them and they were willing to give up a lot to get it. Democrats secured some pretty good terms but they were all temporary, and now they've mostly expired. The Fed money cannon, you will note, has not."