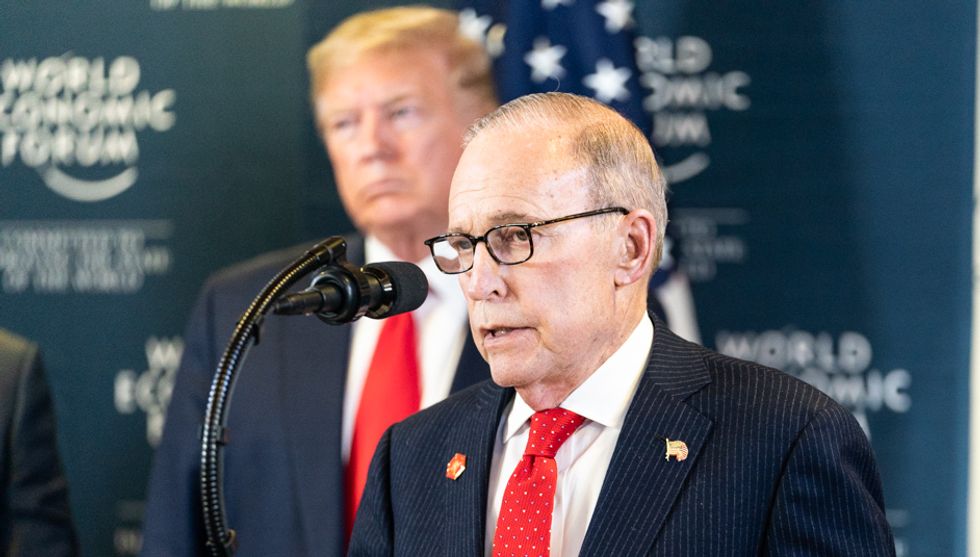 President Donald Trump vowed that workers would not have to pay back payroll taxes if he is re-elected, prompting advisers to downplay his comments amid concerns that such a move could defund Social Security and Medicare.

Trump signed multiple executive orders over the weekend in an attempt to bypass stalled congressional negotiations over the next round of coronavirus relief, though the orders fall well short of the proposed legislation. Their legality have also been called into question.

One of the orders targets the payroll tax, the 12.4% tax split evenly between employers and employees which funds the Social Security and Medicare trust funds. The order would allow workers to defer their payroll tax payments through the end of the year, but those taxes would still need to be paid back by April 15.

Trump responded to skepticism about the impact of the move by telling voters that he would make make the cut "permanent" — but only if he's re-elected.

"If I'm victorious on Nov. 3, I plan to forgive these taxes and make permanent cuts to the payroll tax," Trump said during a news conference from his Bedminster, N.J. golf club on Saturday. "I'm going to make them all permanent. In other words, I'll extend beyond the end of the year and terminate the tax, and so we'll see what happens."

The president has no authority to unilaterally make changes to the tax code. Though Congress has the power to do so, Trump's own Republican Party has repeatedly rejected his proposed payroll tax cut, because it would do little to help during the pandemic while crippling the Social Security and Medicare programs.

"Social Security is more crucial than ever as Americans face the one-two punch of the coronavirus's health and economic consequences," Nancy LeMond, the executive vice president of the AARP, said in statement. "But this approach exacerbates people's already-heightened fears and concerns about their financial and retirement security."

"He is laying out his road map to cutting Social Security," he added.

Aside from endangering Social Security, economists believe the move would do little to help those who need it.

"Even if people were to see a bigger paycheck in a number of weeks, the underlying policy is really poor policy," Chye-Ching Huang, the senior director of economic policy at the left-leaning Center on Budget and Policy Priorities, told The Washington Post. "The people who would be seeing the biggest increase in their paychecks still have jobs, still have earnings . . . People who lost jobs or retired or get income from other sources would see no help from this."

Trump advisers rushed to clean up the president's comments on Sunday, insisting that the move would not impact Social Security.

Treasury Secretary Steven Mnuchin, who according to The New York Times was reluctant about the payroll tax suspension, said the funds would be reimbursed from the Treasury general fund.

"The president in no way wants to harm those trust funds, so they'd be reimbursed just as they always have in the past when we've done these types of things," he told Fox News.

But Mnuchin also said that if Trump gets re-elected, he would "push through legislation to forgive that so, in essence, it will turn into a payroll tax cut."

Top White House economic adviser Larry Kudlow, who pushed for the payroll tax suspension, claimed to CNN that Trump "will protect Social Security and Medicare" and wrongly insisted that he did not vow to permanently cut the payroll tax.

"When he referred to 'permanent,' I think what he was saying is that the deferral of the payroll tax to the end of the year will be made permanent," Kudlow said. "It will be forgiven. The tax is not going to go away."

"That isn't what the president said at all," host Dana Bash responded. "He said the opposite."