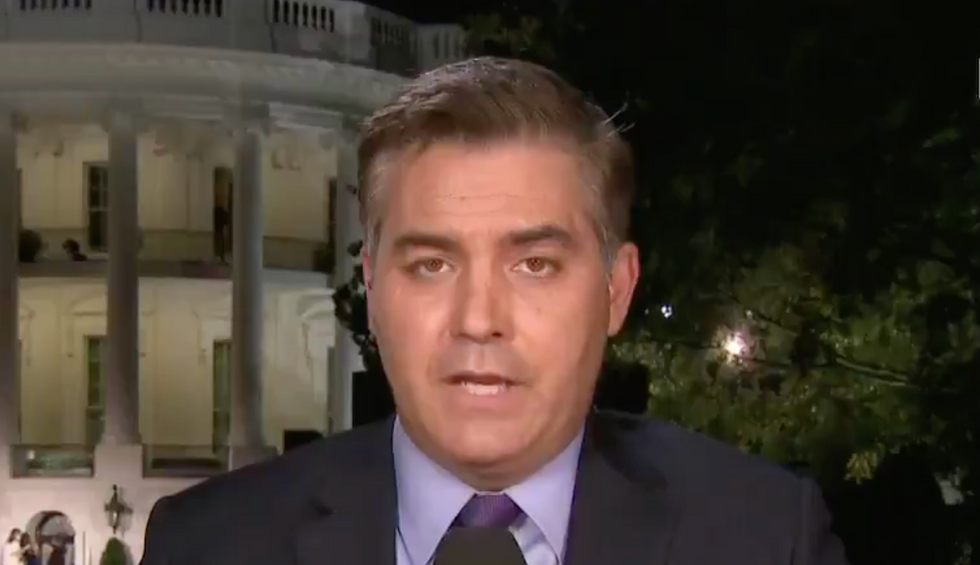 A White House official's flippant response to concerns about the maskless crowds of attendees at the Republican National Convention—and the GOP's ignoring of the coronavirus's horrific toll—have sparked widespred outrage this week.

Reporting on the fourth night of the convention, Acosta said, "We not only heard a lot of gaslighting tonight, we possibly saw and witnessed some superspreading from this event."

Approximately 4,000 Americans died of Covid-19 during the four-day Republican National Convention this week, and more than 180,700 Americans have perished from the virus since the pandemic began. Neither figure was mentioned during the RNC spectacle, which is also under scrutiny for potential violations of the Hatch Act.

The history books will be written about this chapter in our lives. It will show events like that…in the middle of a pandemic, at a time when the country decided to shut down when there were 5,000 roughly people infected, and at a time when more than 5 million infected…we started having events like that. It's really frustrating. It's mind boggling. It shows there's still certain segments of the population still have not learned or are not paying attention to what this virus is. The virus is a constant…It is still a very contagious virus. It is still very much circulating.

The fact that the virus and its death toll was basically left out of the convention drew outrage from Versha Sharma, NowThis senior correspondent and managing editor. "I am floored," Sharma tweeted Friday. "We triple-checked transcripts, we rewatched footage. This is COVID denial on another level entirely."

Medical experts and others also sounded alarms, tweeting their frustrations:

I just turned on the TV to see an opera singer, fireworks, and thousands of unmasked Americans on the WH lawn. Ea… https://t.co/NQ5EBwpyIb
— Dr. Pritesh Gandhi (@Dr. Pritesh Gandhi)1598586747.0

Oh my God The new White House message on Covid: “Everybody is going to catch this thing anyway.” https://t.co/oYYGKgiVxq
— Jon Favreau (@Jon Favreau)1598590619.0

Trump referred to Covid-19 only as the "China virus" during his closing remarks Thursday night, as reports indicate his administration was behind looser guidelines issued by the Centers for Disease Control in the past week. CDC Director Robert Redfield attempted to clarify the new advice, which doesn't explicitly call for testing of individuals potentially exposed to the virus.

"Testing is meant to drive actions and achieve specific public health objectives," Redfield said in a statement. "Everyone who needs a Covid-19 test, can get a test. Everyone who wants a test does not necessarily need a test; the key is to engage the needed public health community in the decision with the appropriate follow-up action."

As of Friday morning, the CDC had not changed guidelines listed on its website to reflect calls for stricter messaging.

"If you are in a high Covid-19 transmission area and have attended a public or private gathering of more than 10 people (without widespread mask wearing or physical distancing): You do not necessarily need a test unless you are a vulnerable individual or your health care provider or state or local public health officials recommend you take one," the site reads.

Still reeling from the response of the senior white house official, Gupta warned that contracting Covid-19 should not be anyone's goal.

"You don't want this virus," he said. "The more that we're learning about it. Even in people who have minimal symptoms, there's a percentage of people who are long haulers. They have symptoms for months afterwards and maybe it becomes something that they live with, we don't know...We don't know what exactly still this virus does to the body."