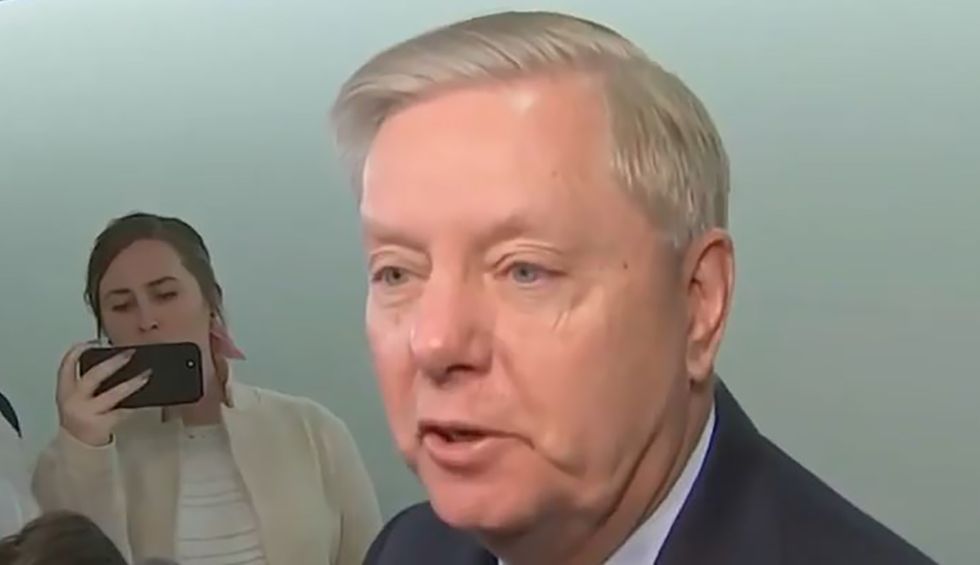 The influential election analysis publication Cook Political Report shifted its ranking this week of the contest for Sen. Lindsey Graham's South Carolina seat from "likely Republican" to "lean Republican," a reflection of recent gains made by the incumbent's Democratic rival Jaime Harrison in the state.

"While there are still large hurdles that remain for Harrison to become the first Democrat elected to the Senate from South Carolina since 1998, it's clear this race is becoming more competitive, and Graham faces an incredibly strong challenge," Cook political analyst Jessica Taylor wrote Monday. "In the races in our Likely Republican column, this is also the one some national Republicans view as the more competitive. We are moving South Carolina from Likely to Lean Republican."

Taylor pointed to a number of data points suggesting Harrison has picked up genuine momentum in the Palmetto State.

First, Harrison out-raised Graham in the first two straight quarters, and he stands about even with the three-term incumbent in the current cycle: Graham's $30.9 million to Harrison's $29 million, through the end of June.

Second is South Carolina's relationship to the twin, urgent phenomena of the coronavirus pandemic and a national reckoning on race, the combination of which Taylor said "could help the Democratic challenger boost African-American turnout and woo white, college educated suburban voters to his side."

"[T]he uncertainty and anger amidst the COVID pandemic — including a surge last month in South Carolina — has done just that," Taylor continued.

The nationwide protests over racial injustice born in early June also benefit Harrison, who is Black, with "further motivation for turning out African-American voters in the state," she added. (In late July, Graham's campaign was called out for digitally darkening Harrison's face in a campaign ad.)

Should Harrison emerge victorious, Taylor pointed out, "South Carolina — the first state to secede from the Union in 1860 — would become the first state in history to have two Black senators serving at the same time." The state is also currently represented by Sen. Tim Scott, who is a Republican.

Graham, the chair of the powerful Senate Judiciary Committee, still holds an edge in Taylor's estimation. But polls are consistently falling in favor of the underdog. She highlights a recent Quinnipiac University poll conducted July 30 through Aug. 3, which pegged the race at a statistical tie. Perhaps equally troubling for Graham, his approval rating was in the red, with 47% disapproving of his job performance and 43% approving of it.

The same poll showed independent voters in the state pulling 10 points in Harrison's favor, who also led among Palmetto State women by a margin of five points. Taylor noted that "that slim advantage seems to be driven by Black women, since Graham is still winning white women by 26 points." She added that Harrison was leading by 19 points among college-educated women and seven points among suburban voters.

Harrison, however, has been riding close with Graham for months now after a poll in late May showed the two in a statistical dead heat.

Though Republicans said their internal polling shows Graham with a bigger lead — per Taylor — publicly available internal Democratic polling aligns with Quinnipiac's results. An internal survey last month from Cornell Belcher at Brilliant Corners Research & Strategies carried out on behalf of the Harrison campaign showed Graham up 43% to 41%. It included Libertarian and Constitution Party candidates, perhaps a boon for Harrison given Graham's low favorability numbers.

Anecdotally, some Republicans appear to be nervous. An unnamed South Carolina Republican operative told Taylor that Harrison was running "a centrist Democratic campaign focused on dinner table issues that has captured a lot of disaffected moderates" and had put serious legwork into leveraging demographic realignments.

Harrison, former chair of the South Carolina Democratic Party and longtime aide to Democratic Rep. James Clyburn, told Salon in the first of a two-part interview that he saw a bellwether in 2018's Republican-to-Democratic flip in the state's 1st Congressional District in Charleston, a district which Trump won by 13 points in 2016.

"We've already seen change here," he said. "Folks told us that we couldn't pick up a congressional district, and guess what we did in 2018? Joe Cunningham won a district that we hadn't won in 20, 30 years. And we won a state Senate race that year that we hadn't won in 20, 30 years. For the first time, we have a Democratic-controlled city council in Greenville, the heart of the conservative vote."

"Once again, the race has shifted in favor of Jaime Harrison's movement to bring hope back to all 46 counties of South Carolina," Harrison campaign spokesperson Guy King told Salon in a statement about the Cook ranking shift.

"Lindsey Graham's response to this pandemic has made it clear: The people of this state are tired of an elected official more concerned about playing political games than he is about finding solutions to urgent problems," King said. "Every day, more voters are turning towards Jaime Harrison, who they know will bring back integrity and principled leadership to this U.S. Senate seat."

Cook's shift appears part of a more broad trend the publication has noticed. In late July, it changed the national outlook for the Senate: Democrats are now favored to take back the upper chamber, thanks in large part to the main forces re-shaping the South Carolina matchup — the pandemic and racial justice.

"Taken together, that's not just a perfect storm for Democrats," Cook said, "but perhaps a perfect tsunami."