RNC review: Speakers described an alternate reality in which chaos and violence of the Trump era is Joe Biden's fault 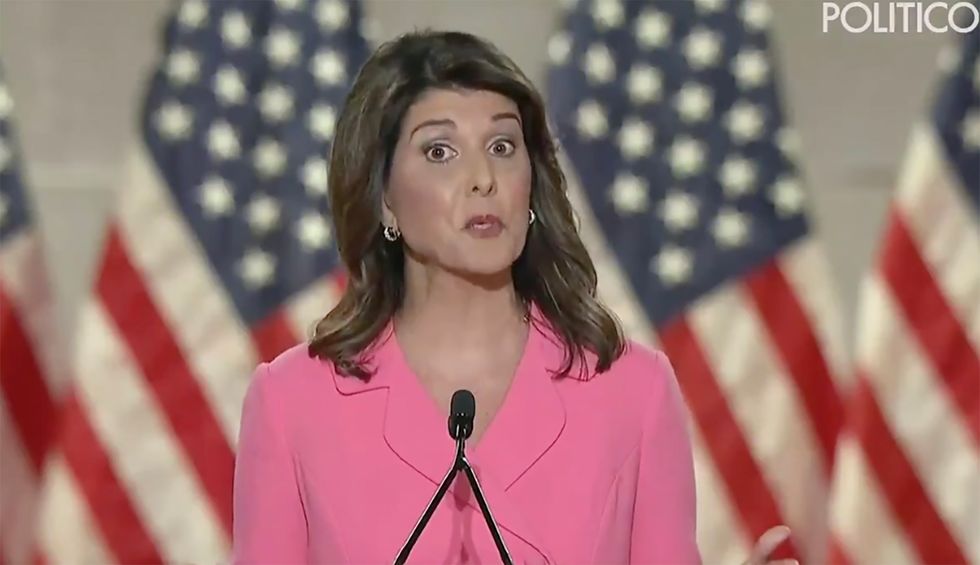 The first night of the Republican National Convention featured a diverse lineup that defended President Donald Trump from charges of racism, even as other speakers sought to stoke racial fears and push conspiracy theories.

The convention, largely consisting of a mix of live and pre-taped speeches before an empty auditorium, appeared to take place in an alternate reality where Trump had successfully beaten back the coronavirus pandemic, and where the protests, violence and racial division seen during Trump's presidency would only get worse Democratic nominee Joe Biden is elected. It was a wildly dishonest night, with the New York Times fact-checking team counting at least 30 false and misleading claims.

"This one half-night of Republican programming so far has been exponentially more dishonest than the entire four nights of the Democratic convention," wrote CNN fact-checker Daniel Dale.

While Republicans insisted that their convention would be optimistic, and headliners like former UN ambassador Nikki Haley and Sen. Tim Scott of South Carolina delivered speeches on the promise of America that could have taken place under any other Republican president, the tone of the night was dark and the theme was racial fear-mongering.

The night kicked off with a speech by Charlie Kirk, founder of the right-wing student group Turning Point USA, who described Trump as a "bodyguard of Western civilization" — a common white nationalist dog whistle — who is defending America against a "vengeful mob that seeks to destroy our way of life, our neighborhoods, schools, churches and values."

Rep. Jim Jordan of Ohio gave a speech riddled with falsehoods accusing Democrats of stoking "crime, violence, and mob rule." Rep. Matt Gaetz of Florida, one of Trump's most loyal followers in Congress, bizarrely warned that Democrats will "disarm you, empty the prisons, lock you in your home, and invite MS-13 to live next door."

"They are not satisfied with spreading the chaos and violence into our communities. They want to abolish the suburbs altogether by ending single-family home zoning," Patricia McCloskey said. "This forced rezoning would bring crime, lawlessness and low-quality apartments into thriving suburban neighborhoods.

"These are the policies that are coming to a neighborhood near you," she added. "So make no mistake: No matter where you live, your family will not be safe in the radical Democrats' America."

These divisive speeches were interspersed between people of color who insisted that neither Trump, the Republican Party nor the nation had a problem with racism.

Former NFL player Herschel Walker — who once played for the New Jersey Generals, a long-gone USFL team owned by Trump — said it "hurt my soul" to hear people call Trump "racist," noting their long friendship. Haley, speaking of her own experience as the daughter of Indian immigrants, said that "America is not a racist country" but a "work in progress."

Scott, the night's keynote speaker, delivered a powerful speech on the promise of America and his own experiences with racism. Scott urged viewers to "not look simply at what the candidates say" before listing a number of remarks made by Biden to suggest that he, and not Trump, would ignore minority communities. Scott repeatedly insisted that Biden wants to turn the U.S. into a "socialist utopia," which would be news to Biden and the progressive primary challenges who repeatedly criticized him for being too conservative.

But while the headliners tried to ignore the division stoked by Trump since long before he launched his 2016 campaign, Donald Trump Jr. and his girlfriend, former Fox News personality Kimberly Guilfoyle, stole the show with stunningly dark and loud diatribes that prompted viewers to question whether cocaine was involved.

Guilfoyle, who earns $180,000 per year from the Trump campaign, shouted an amped-up speech into the empty auditorium comparing Democrats to socialists in Cuba and Venezuela. Guilfoyle, who was formerly married to California Gov. Gavin Newsom, claimed that Democrats (including her ex-husband, apparently) had turned California into a "land of discarded heroin needles in parks, riots in streets and blackouts in homes."

"They want to control what you see and think and believe so that they can control how you live," she warned. "They want to enslave you to the weak, dependent liberal victim ideology to the point that you will not recognize this country or yourself."

"Biden, Harris and the rest of the socialists will fundamentally change this nation," she continued. "They want open borders, closed schools, dangerous amnesty, and will selfishly send your jobs back to China while they get rich. They will defund, dismantle and destroy America's law enforcement. When you are in trouble and need police, don't count on the Democrats."

Donald Trump Jr. gave a speech touting his father's response to the pandemic, albeit one that was entirely detached from reality.

He claimed that the president had "acted quickly," even though Trump spent the crucial early weeks downplaying the threat, and that the administration had delivered supplies to "hospitals that needed them most," even though the Health and Human Services Department's inspector general found rampant shortages of vital supplies. Six months into the pandemic, such equipment remains in short supply.

The night also featured segments in which Trump hyped hydroxychloroquine, a drug that has repeatedly been found ineffective in treating the coronavirus, and a video that touted Trump's "rapid policy changes" in the face of the pandemic.

MSNBC broke away from the broadcast to fact-check the claims.

"To say that 170,000 souls lost in our country up to now is a success by any measure is fantasy," Dr. Vin Gupta, a disease expert at the Institute for Health Metrics and Evaluation, said during the segment. "It's disrespectful to the families who lost loved ones, to frontline clinicians who put their lives at risk. It's just fantasy. It's propaganda."

During another segment, Trump spoke with a group of Americans who had been freed from overseas prisons, including pastor Andrew Brunson, who was arrested by Turkey during President Recep Tayyip Erdogan's purge following an unsuccessful coup attempt.

"To me, President Erdogan was very good," Trump told the pastor, who was detained for two years.

Though all of the major news networks break away during portions of the convention for analysis and ads, Fox News host Sean Hannity warned his viewers that "the media won't cover large parts of the RNC that we'll be showing."

"Can't believe I have to watch the convention on @CNN," he wrote. "Unbelievable."