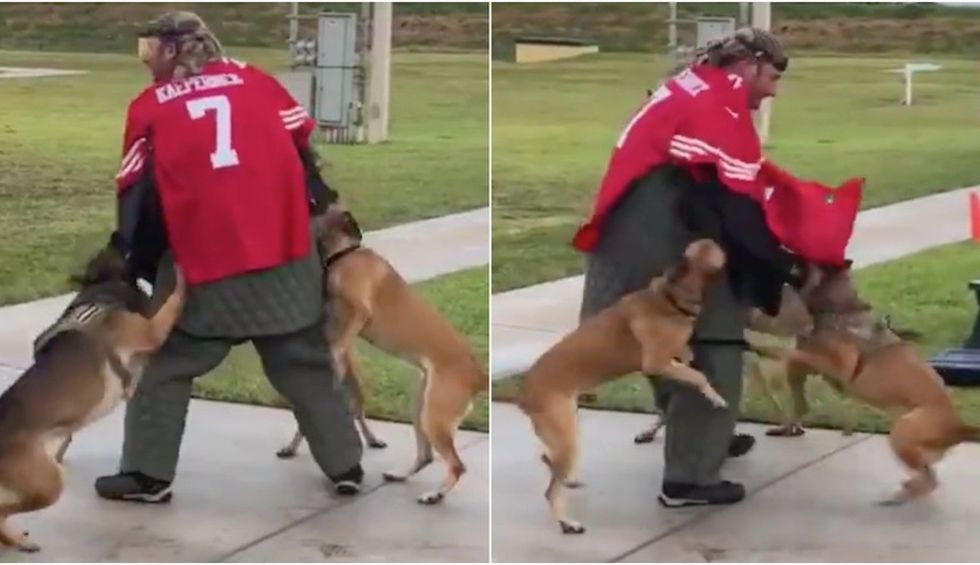 The U.S. Navy is investigating the circumstances around year-old video footage showing a dog handler mocking free-agent quarterback Colin Kaepernick. In the video, the handler could be seen wearing a Kaepernick jersey as dogs attacked him for demonstration purposes at an event held by the nonprofit National Navy UDT-SEAL Museum. "Oh man, I will stand,” the handler could be heard saying after the dog attack. The comment, a reference to  Kaepernick’s earlier decision to kneel for social justice during the playing of the national anthem at NFL games, earned him a few laughs from the crowd, but the Navy was not amused.

“The inherent message of this video is completely inconsistent with the values and ethos of Naval Special Warfare and the U.S. Navy,” a Navy spokesperson said in a statement about the incident. "We are investigating the matter fully, and initial indications are that there were no active duty Navy personnel or equipment involved with this independent organization's event."

When Kaepernick, who was then a San Francisco 49ers quarterback, took a knee during the national anthem four years ago, he was all but banned from the NFL and targeted with threats and profanities. NFL commissioner Roger Goodell recently did an about-face in light of protests throughout the nation following the death of George Floyd. A Black man, Floyd died in police custody May 25 after a Minneapolis cop kneeled on his neck for more than eight minutes. “We were wrong for not listening to NFL players earlier and encourage all to speak out and peacefully protest," Goodell has since said.

Far be it for President Donald Trump to follow suit, though. He implied Kaepernick was a “son of a b---h” at an Alabama rally for Republican Sen. Luther Strange in September 2017, and he stood by his stance this year following Floyd’s death.

Tony Fauci has nothing to do with NFL Football. They are planning a very safe and controlled opening. However, if t… https://t.co/zBkWx4PGQg
— Donald J. Trump (@Donald J. Trump)1592581728.0

Trump said June 19 that if the NFL doesn’t “stand for our National Anthem and our Great American Flag, I won’t be watching!!!” It’s no mystery why people, even those representing powerful agencies, feel so emboldened to live out their cherished racist sentiments. The SEAL museum has failed to address the anti-Kaepernick videos in a public statement.

In another video, after “Navy SEALs and Navy SEAL dogs take down Colin Kaepernick for not standing during National… https://t.co/1pvtUpnoGq
— Billy Corben (@Billy Corben)1596390034.0

Although it isn't officially affiliated with the Navy SEALs, the museum has several retired SEALs on its board of directors and has apparently been mocking Kaepernick for years, ABC News reported. Another video taken in November 2018 at the museum's 33rd Annual Muster event shows an SUV with the words “TAKE A KNEE” and “NIKE” on it being used as a shooting target following the corporation’s decision to use Kaepernick in an ad.