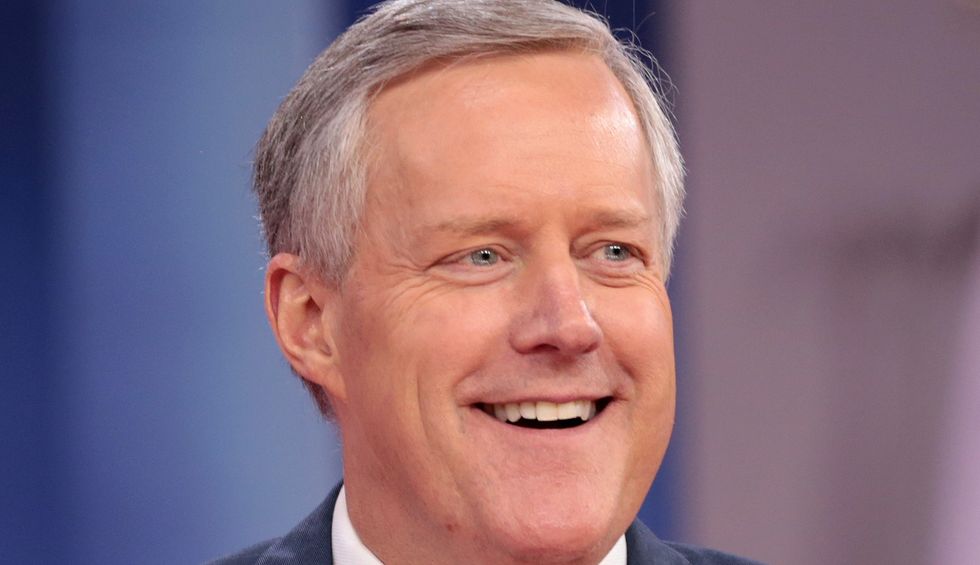 In a bizarre defense of President Donald Trump on "Meet The Press," White House Chief of Staff Mark Meadows tried to convince NBC’s Chuck Todd Sunday that Trump was both responsible for creating a “peaceful” America” and blameless for violence disrupting in American cities.

"You want to talk about Donald Trump's America. Most of Donald Trump's America is peaceful," Meadows said. “It is a Democrat-led city in Portland that we're talking about this morning, who just yesterday denied help once again from the federal government." He then alluded to scenes of violence and called for “these people that are conducting these acts to go to jail.”

Meadows contradicted himself in a laughable but not particularly unique fashion as he mainly echoed statements made days earlier from the commander-in-chief himself Thursday at the Republican National Convention. During the convention, the president alleged an increase in crime in cities that have been holding anti-police brutality demonstrations. Trump listed cities like Portland, where demonstrators have been protesting for racial justice after the death of Minneapolis father George Floyd, and Kenosha, where a cop shot at father Jacob Blake seven times in front of his children, but the nonviolent stance the president called for didn’t seem to extend to the police inflicting it.

“In the strongest possible terms the Republican party condemns the rioting, looting, arson and violence we have seen in Democrat-run cities all, like Kenosha, Minneapolis, Portland, Chicago and New York, many others, Democrat-run,” Trump said. “There’s violence and danger in the streets of many Democrat-run cities throughout America.  This problem could easily be fixed if they wanted to.  Just call, we’re ready to go in.  We’ll take care of your problem in a matter of hours.  Just call.  We have to wait for the call.  It’s too bad we have to, but we have to wait for the call.”

NPR Justice Correspondent Ryan Lucas ruled out much of the president's statement as fiction, citing crime rates "either at or near historic lows" dating back to former President Barack Obama's administration, but facts often prove to be of little use to Trump’s administration.

At a different point in the interview, Todd asked Meadows: “The president on Thursday night painted a picture of what he said would be Joe Biden's America, and I look at the violence this week. Mr. Meadows, this is in Donald Trump’s America. How much responsibility should voters be giving the president for his inability to, to keep the streets safe?”

Meadows responded: "Well, I mean you can try to reframe it that way, Chuck, but that's just not accurate. I can tell you that when we look at Kenosha in phone calls that were made to the governor of Wisconsin, we offered help. Help was denied. Obviously, there was multiple gunshots, and people lost their life." What Meadows failed to mention is that the person accused of firing the shots that ultimately killed two protesters is a white teenager who fancies himself a pro-police militiaman.