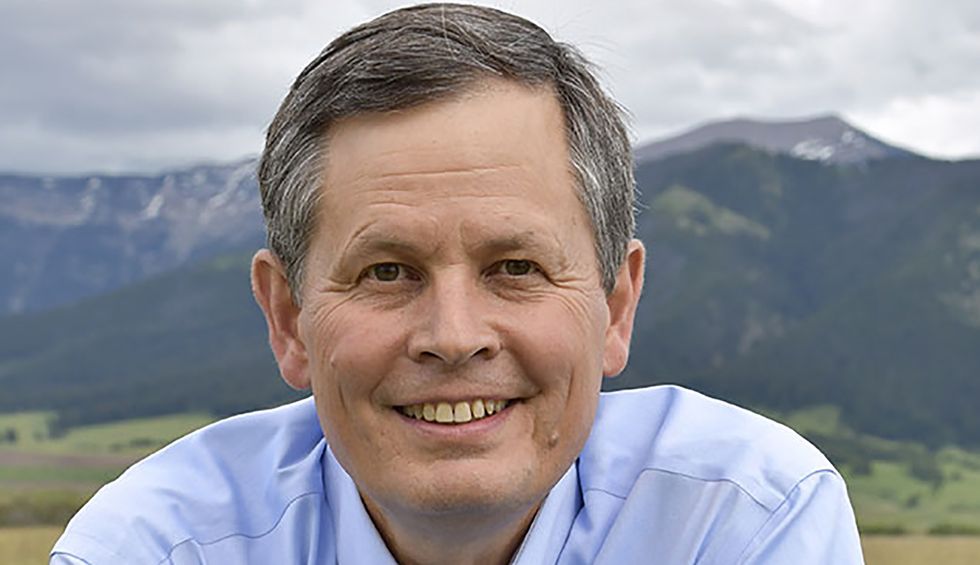 Aleading Democratic group accused Sen. Steve Daines, R-Mont., of hypocrisy for campaign ads touting Daines as tough on China after he repeatedly met with Chinese Communist Party officials on trips paid for by taxpayers — while avoiding town halls with his constituents back home.

Daines, who holds a narrow lead over Democratic Gov. Steve Bullock in what looks to be a tight Senate race, has launched a new ad criticizing China over the coronavirus pandemic and vowing to "break our reliance on China" to help constituents back home in Montana.

But Daines' Democratic critics say he has spent a lot more time cozying up to Chinese leaders since taking office than his own state's residents.

Daines reported spending at least $67,283 on 10 congressional delegations overseas between 2015 and 2019, according to a review of his foreign travel financial reports. He visited China on at least five of those trips between April 2016 and September 2019.

"I've led congressional visits to China every year since I've been in the United States Senate," he bragged during a Senate hearing in 2018, and has been seen meeting with numerous top Chinese Communist Party officials since taking office.

Daines, who lived in China during his career at the consumer goods conglomerate Procter & Gamble, said at another hearing that he was uniquely qualified to work on issues related to China "as someone who spent over five years living" in the country.

But the jet-setting freshman senator has drawn criticism in his home state for dodging his constituents. Democratic groups have made Daines' refusal to meet with Montana residents a key issue in the campaign.

"It's no surprise Steve Daines would rather spend time rubbing elbows overseas than answering to his constituents about why he's constantly voted to strip them of their health care as a senator and send their jobs abroad while working in the private sector," Matt Corridoni, a spokesman for the Democratic Senate Majority PAC, told Salon. The group has poured hundreds of thousands of dollars into ads opposing Daines.

Local news outlets have criticized Daines for the refusal to hold town halls for years and voters have held protests as he continued to avoid constituents.

The Helena Independent Record reported in 2017 that the senator had listed just one public "town hall" in more than two years.

The Montana news outlet Last Best News reported in 2018 that Daines had instead opted to hold "tele-town-halls," which the outlet noted had been panned as a "sham that protects Daines from having to answer difficult questions." Daines has also required voters to pre-register for his tele-town halls.

An editorial in the Missoulian pleaded for Daines to "come home and face his constituents," arguing that tele-town-halls "should never replace face-to-face meetings between Montanans and our elected officials."

When Daines has held in-person events, they often featured a "tailored audience," the Independent Record reported.

He has also dodged constituents at other in-person events. Daines "declined to meet with the two-dozen people who had gathered to participate in what the senator's office had billed as a meeting with 'local officials, community leaders and constituents,'" while touring a local brewery in 2018, according to Last Best News. "Daines arrived early and privately toured the brewing plant before leaving through the back door, bypassing those who believed the senator would be meeting with them in an open forum."

"I was under the impression we were going to get to meet with him today, per the press release he sent out inviting conversation with his constituents," Missoula City Council member Julie Merritt told the outlet. "That's obviously being declined. I just saw him get in the car and drive away as he sneaked out the back door."

Daines arrived early for another event and left before he was advertised to speak. Daines went to a motorcycle dealership for an event touting the Republican tax cuts in 2018 an hour earlier than expected and finished speaking before the event was even scheduled to start, according to the local news outlet Ravalli Republic.

"I think this is despicable," Dan Harper, a member of the group Back Country Horsemen who went to see Daines speak, told the outlet. "We just happened to be here early. I had planned to be here at 1:15, and if I had I would have missed everything. I resent that. This is not how our government works.'"

Daines' campaign did not respond to questions from Salon.

Tester has also spent much less time traveling overseas, taking just four congressional delegations abroad since 2007, according to a review of his foreign travel reports.

Unlike Tester, Daines has also bucked tradition and refused to publish his official schedule online.

Daines has been more forthcoming about buddying up to Chinese leaders.

In 2017, Daines, who said he brought his wife along on the trip, said in a Fox Business interview that he had met with Chinese officials to press for their assistance in sanctioning North Korea.

"We're very clear— we need their help," he said. "This needs to be done with China's help and we'll see. I didn't get a definitive response but they certainly heard our request."

Daines later thanked the Chinese for their help in 2018 after another trip.

"The Chinese have been helping us in that regard, and it's having an effect on North Korea," he said. "We met with people who had first-hand knowledge about what's going on in North Korea, and we made that point to the Chinese leadership to keep that pressure on."

Chinese officials celebrated the visits as evidence that the "US congress values China-US relations."

In 2018, Daines' office said in a press release that he traveled to China to call out the country over religious freedom but the Financial Times reported that Daines used the trip to try to "calm" Chinese officials who were "angry" over the Trump administration's moves to develop closer ties to Taiwan and "focused his closing remarks on their concerns about US-Taiwan relations."

A Chinese news outlet reported that Daines and other Republican senators told Chinese officials that the relationship between the U.S. and China was "one of the most important bilateral relations in the world, adding that there was no reason for both countries to have conflict." Chinese state TV reported that the meeting was to "calm jitters" about Trump's tariffs on China and "move things back on track" in trade negotiations. Chinese state-owned media also reported that the delegation led by Daines told the Chinese that "Congress is willing to help settle trade frictions through a mutually beneficial and win-win method so … as to ensure that the development of the U.S.-China relations will continue to benefit the two peoples."

Trump, who bragged about his improving relationship with the Chinese during trade talks before souring on the country after he was widely criticized over the federal response to the coronavirus, praised Daines' efforts last year.

"China asked for the meeting, they have a lot of respect for Sen. Daines," he told reporters in September.

But the meeting alarmed some pro-Trump China hawks.

Fox Business host Lou Dobbs, who was described as a "shadow chief of staff" in the Trump administration by a former top aide, warned that Daines and Sen. David Perdue, R-Ga., "may well be undercutting" the trade talks.

"The meetings … were arranged quite apart from the White House and may in fact threaten any progress with China already made by President Trump and his top negotiating team," he warned in September. "The two senators who would hardly make, at least in my opinion, good emissaries under any circumstance, because both have a significant history of outsourcing American jobs while working in the private sector."

Daines has long been accused of helping Procter & Gamble outsource jobs because he helped set up new factories in China while the company shuttered plants in the United States. But officials at the company have pushed back against claims that Daines was involved in any outsourcing decisions.

Dobbs later issued a correction after Daines denied that he was involved in outsourcing.

The Senate Majority PAC accused Daines of hypocrisy for touting his tough stance on China while developing close relationships with the Chinese Community Party.

"He can try and hide from his record but Montana voters know the truth: Steve Daines can't be trusted to put them first. It's no wonder he's been called 'China's ambassador' — his hypocritical 'tough talk' on China is just another sign that he's a typical D.C. politician who is looking out for himself," Corridoni said.

Daines has taken five other trips to other countries, where he's met with numerous world leaders. One of the congressional delegations was to Russia during the week of July 4, which was criticized by Washington Post columnist Dana Milbank for "posing for propaganda photos with Russian officials" on the same day the Senate Intelligence Committee released a report confirming that Russia had interfered in the 2016 election, and the same day that Russian agents accused of poisoning two people in Britain.

The delegation, Milbank wrote, avoided "the risk of offending their hosts" by not meeting with opposition figures and choosing to "soft-pedal their criticism of the Russian government, leading Russian politicians and state media to mock them as supplicants."

"On Russian state television, presenters and guests mocked the U.S. congressional delegation for appearing to put a weak foot forward, noting how the message of tough talk they promised in Washington 'changed a bit' by the time they got to Moscow," the Post reported.

Though Daines and other senators have tried to frame their congressional delegations as focused on delivering tough talk from the U.S., a Russian member of parliament said it was "one of the easiest" meetings of his life, according to the Post.