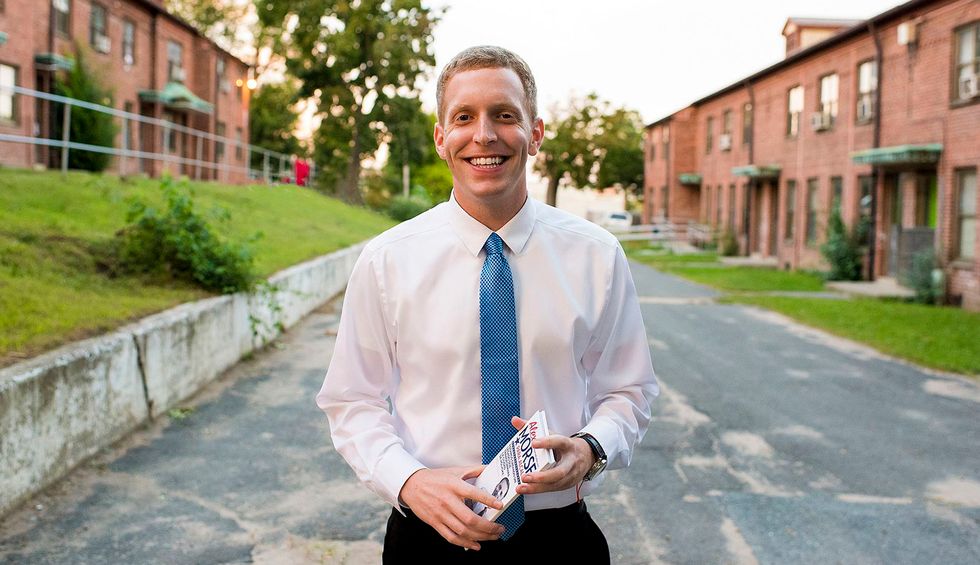 Following a damaging report that the Massachusetts Democratic Party helped a group of college Democrats launch a campaign to discredit a progressive U.S. House candidate in the Bay State, a group of Democratic Committee members have called for an investigation into the state party's involvement.

"Recent events and revelations regarding an intentional effort to influence the outcome of the Democratic primary in Congressional District 1, by smearing Mayor Alex Morse, have raised concerns that members of the Massachusetts Democratic State Committee may have behaved unethically," read a letter signed by more than 50 state committee members.

The letter, which demands an investigation before the September 1 state primary, came after The Intercept reported that members of the UMass Amherst College Democrats conspired to bring down Morse, a progressive challenger to Rep. Richard Neal (D-Mass.), and that the state party was involved in the plot to sow doubt about Morse's character. The state party has agreed to an investigation, but not until after the primary.

"This investigation should be conducted by individuals or an organization outside of the MDP to ensure independence and transparency," read the letter. "And, depending on the results of the investigation, we call for the immediate resignation, suspension, or removal of individuals responsible for, or with participation or knowledge of, what appears to be an unprecedented abuse of power."

The scandal centers around allegations that Morse connected with some UMass Amherst students on dating apps and made them uncomfortable. Morse, who is gay, denied allegations of wrongdoing when they surfaced earlier this month.

"I continue this campaign mindful of the fact that my personal life—and my consensual sexual activity—will be subject to scrutiny and fixation that are all too familiar to other members of the LGBTQ community," he wrote in a statement.

"Too often, elections aren't about issues and ideas; they're about personal destruction," Morse added. "As I move forward, I vow to keep speaking up for the cause on which this campaign was built: the cause of building a true and just democracy in this country."

Neal has denied any involvement in the scandal, and on Monday The Intercept reported that Veronica Martinez, executive director of the Massachusetts Democratic Party, denied allegations that she told the UMass Amherst College Democrats to destroy communications between the state party and the students after the outlet's reporting.

Morse and Neal faced off in a televised debate Monday, where Neal again denied any involvement in the smear campaign and Morse, shifting to policy, criticized Neal for voting for the CARES Act, a Covid-19 stimulus bill laden with corporate giveaways.

"Congressman Neal helped craft legislation that created a $500 billion slush fund for corporations," Morse said in the debate, referring to part of the aid package. "Why go to Washington if you're not going to use your power for the people of this district?"

Local and national progressive groups varied in their responses to the allegations against Morse, with some pulling previous endorsements. Others, including the Bay State Stonewall Democrats, denounced "unsubstantiated" claims and threw their support behind the progressive challenger.

Brand New Congress endorsed Morse in March and continued to support him throughout the smear campaign.

"They face incumbents whose races have loads of cash, and more. In Alex Morse's race, he faced, even more, an orchestrated smear campaign built on homophobic tropes."

"We are proud to stand in support of Alex Morse," Day continued. "He's challenging a 30-year-incumbent, who's done little for the community. We know Alex is the right fit to replace Richie Neal and we remain unwavering in our commitment to getting him elected."