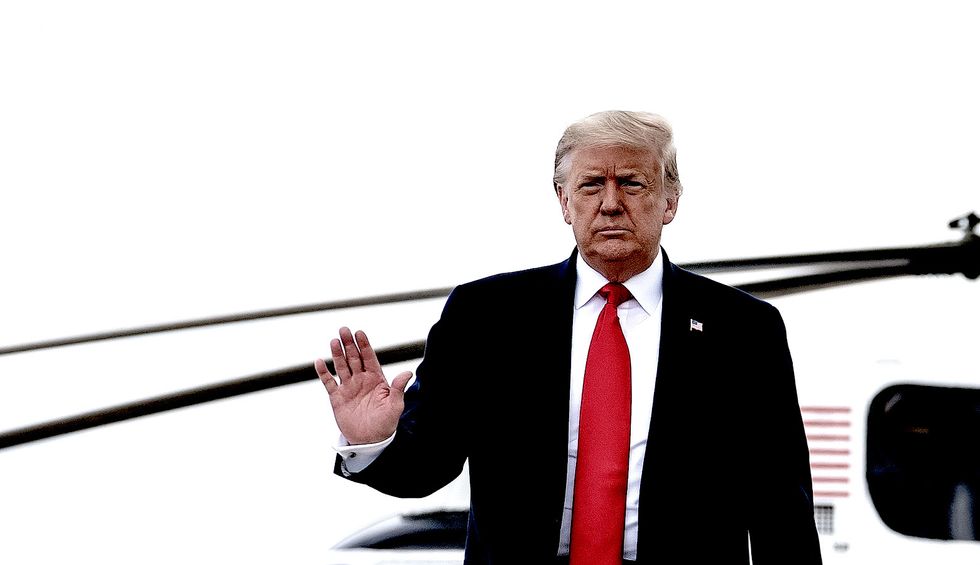 President Donald J. Trump disembarks Marine One at Joint Base Andrews Friday, July 10, 2020, and is escorted to Air Force One by U.S. Air Force personnel. (Official White House Photo by Tia Dufour)
John Stoehr, The Editorial Board
and
The Editorial Board
August 26, 2020

I logged on today to news of a young white militiaman who shot three people with a long gun last night in Kenosha, Wisconsin, killing two. The suspect, still at large, evidently clashed with protesters demonstrating against police violence. On Sunday, a white cop shot an unarmed Black man in the back seven times. The city, halfway between Milwaukee and Chicago, has since seen riots and fires set to property. Jacob Blake is paralyzed from the waist down, his family said. His sister, Letetra Widman, gave powerful remarks Tuesday: “When you say the name ‘Jacob Blake,’ make sure you say ‘father.’ Make sure you say ‘cousin.’ Make sure you say ‘son.’ Make sure you say ‘uncle.’ But most importantly, make sure you say ‘human.’ Let it marinate in your mouth, in your minds. A human life. … I don't want your pity. I want change.”

I’ll have more to say about this another time. For now, I want to say whatever happens in Kenosha, whether the shooters soon see justice or whether peace and stability soon return, isn’t important to the president. What’s important is televised images of violence, chaos and fire in American cities. Donald Trump hopes these images will frighten just enough white people in just the right states into voting for him as their champion. Cities play a key role in authoritarian politics. They are dens of disorder, crime and disease not because of failed policy or corrupt leadership, but because of what they are: sites in which different people from different walks of life live, work and play together in relative harmony. To the fascist mind, this is impossible. “Race”-mingling causes violence. Kenosha is proof. The solution is a president-protector.

There seems to be confusion amid this week’s coverage of the (virtual) Republican National Convention. On the one hand, the president and the GOP appealed to “minority voters” and women. Hence appearances by Tim Scott, one of two Black Republicans in the US Congress, Herschel Walker, the Black pro-football great, Nikki Haley, the Indian-American former governor of South Carolina and former US ambassador to the United Nations, and Melania Trump. On the other hand, Trump and the GOP are terrorizing white Americans, issuing dire warnings that if they don’t vote for Trump, the world as they know it will be turned upside down. The Lord God will be condemned. Wives and children will rule over fathers. Black and brown people, soon to be a minority-majority, will use their new power to seek vengeance. How can the Republicans court minorities and women while using them to scare white people?

The answer again can be found in authoritarian politics. As I wrote Tuesday, Tim Scott wasn’t appealing to voters of color. Moreover, Melania Trump and Tiffany Trump, the president’s lesser-known daughter, were not appealing to women. They were communicating to white voters who might be uncomfortable voting for a man who openly embraces fascists of the sort who killed two people in Kenosha that it’s OK to vote for Trump, even if you suspect he’s a fascist, because here we are, vouching for a fascist. Indeed, they signaled, voting for Trump is the right thing to do, because if the radical left Democrat agenda is given a chance to run this country, you’re going to see more Kenoshas. Do you think Joe Biden is going to protect you from violent hordes of rioters and looters? The only man capable of that is Donald Trump. (No one said these exact words, of course, but this was the subliminal message of the words they used.)

All of this is bad enough, but making Trump’s reelection and the deterioration of the republic more likely is normal people not seeing, or refusing to see, what’s actually going on. The president does not want to establish law and order. He wants to escalate lawlessness by seeing vigilantes take the law into their own hands. He does not want to get rid of certain social problems. He wants to get rid of certain people from our society. He does not want to establish order. He wants to crush dissent. And yet Matt Lewis, the Daily Beast’s respected conservative commentator (a so-called “Never-Trumper”), said during Monday’s convention proceedings: “If you’re from a liberal Democratic background, or have always lived in a cosmopolitan area, you may have no idea how potentially effective this message will be to a lot of conservative folks.”

Instead of explaining propaganda’s deleterious effects, respectable people might choose explaining the truth. Cities are full of people, not just Democrats, liberals and “cosmopolitans.” (Lewis himself lives in New York City!) Cities include people like me. We grew up among “conservative folks.” We understand intimately that many of them cannot tolerate disagreement. For that reason, they sublimate, and demand that others sublimate, their liberty to the authoritarian will of the “conservative” collective. We are, in other words, people who fled to cities to get away from “conservative folks” in search of ourselves and our freedoms. Over time, I landed in New Haven, my current home, a city that to some “conservative folks” is supposed to be impossible. It is a minority-majority city with problems, to be sure, but otherwise gets on pretty well. Yes, “conservative folks” believe Trump, but their views are demonstrably wrong.