If Trump wins, all of our past war victories are reversed 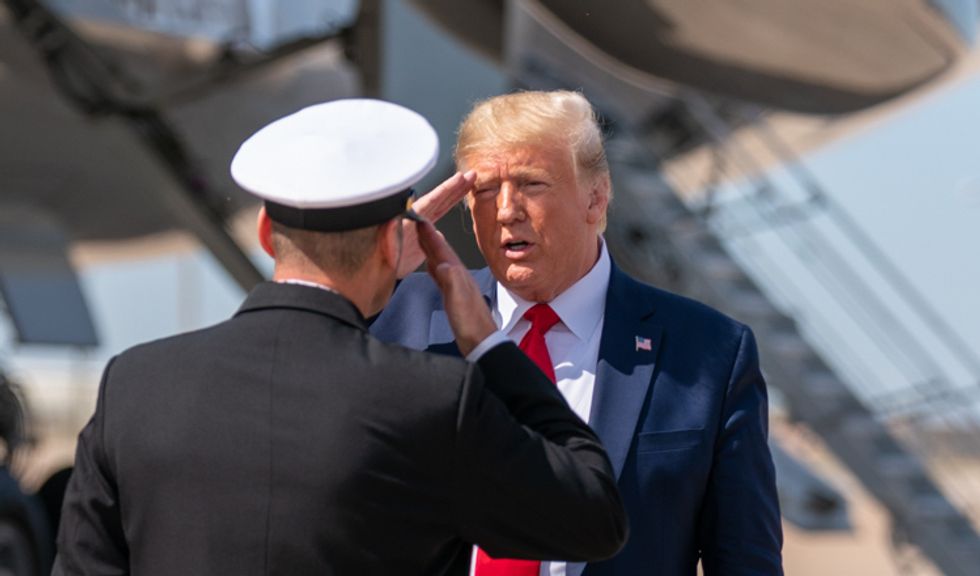 The Right has mastered preemptive wolf-crying.  Calling Obama Hitler got us up in arms about hyperbole, which opened the way for right to shift us toward Nazism with us reluctant to call it by its true name because, after all, we said Hitlerizing is hyperbole.

If reelected in November he would be unstoppable and no, that’s not hyperbole. Indeed, the Trump cult threatens to reverse the outcomes of practically every war the United States has ever won.

Rumors of our nation’s victories have been greatly exaggerated. We let our guard down after the revolutionary, civil, world, and cold wars. We became complacent.

Our myths of national triumph made hopeful misinterpretations of those victories. The Revolutionary War didn’t liberate us from tyranny such that all men were finally recognized as created equal. The civil war wasn’t a victory against succession but a pyrrhic victory against racism, surrendered during a mismanaged reconstruction. Famously, WWI was not the war to end all wars after all. WWII did not end the threat of fascism. The US was not long the only atomic power capable of preventing all other states from getting them. The cold war wasn’t a war even a war against Communism. It was a war against oligarchy. Communism was simply the brand-name. Oligarchy adopts whatever brand name is faddish at the time.

After each war, we celebrated, free at last, hoping that, faking it 'til we made it, the American dream would eventually be realized. Now, too late, we’re facing our vulnerabilities, having surrendered too much already.

Declared ideologies are brand-name tools of misdirection. There has never been a communist state and there never will be a libertarian, Islamic or Christian state as defined by the tenets of those ideologies, not merely their branding. Such ideologies are invariably the Trojan horses for oligarchic dictatorship take-over. To seed a revolution one first must loosen the soil, fomenting chaos that psychopathic oligarchs exploit.

The US has never had a more formidable enemy than the Trumpian axis of evil that will either be defeated or victorious in less than 100 days. The 2016 election gave the axis a foothold. A 2020 victory would give it complete control.

Isolated from threats at our borders, we have fought arrogant, arms-length wars on foreign soil, wars. We became a self-satisfied nation, never suspecting that we could be colonized from within by an oligarch dictatorship abetted by Russia, fueled by Confederate revivalism and funded by the anti-communist oligarchy that demanded dictatorial control.

We would have realized this sooner had we not been distracted by the ideologies that would-be oligarch dictators use for cover as they vie to translate wealth into power so they can have it all.

Yale historian Timothy Snyder suggests that what’s common to all modern ideological Trojan horses is “sado-populism,” not policies or plans for a better future but rather the motivational power of sticking it to past enemies, galvanizing the struggling masses to direct their resentment toward those struggling more. Sado-populism is the haves mobilizing the frustrations of the have-lesses against the have-nots. Its sole goal is further enrichment and empowerment of oligarch dictators. It doesn’t make nations great again; it inflicts pain that fuels further sadistic scapegoating of the have-nots. At the individual psychological level, sado-populism is sado-narcissism.

There are two ways for narcissists to prevail elevating oneself or demoting others. In a way, “sado-narcissism” is redundant. Narcissists are by definition, sadists. Snyder’s use of “sado” makes the goal of demoting others explicit.

As Snyder explains in his excellent book, “The Road to Unfreedom” Putin landed on a broad sado-populist strategy for dealing with the United States and Europe. Disadvantaged after the official end to the cold war, with no industrial or resourced advantages, he focused not on elevating Russia but worsening conditions within Europe and the US, dividing the nations of the EU and turning American’s against each other through his useful idiot, our sado-narcissist president.  A second term for him would be the bulk belated reversal of all our past war victories.

This is our nation’s darkest hour. Never has so much sado-populism been inflicted on so many to the advantage of so few. Our nation’s most formidable enemy ever is not at our borders, it is a cancer that grows within. And no that’s not hyperbole despite the preemptive strategic hyperbole of the wolf-crying sado-populists.