How the RNC put Senate Republicans in a bind 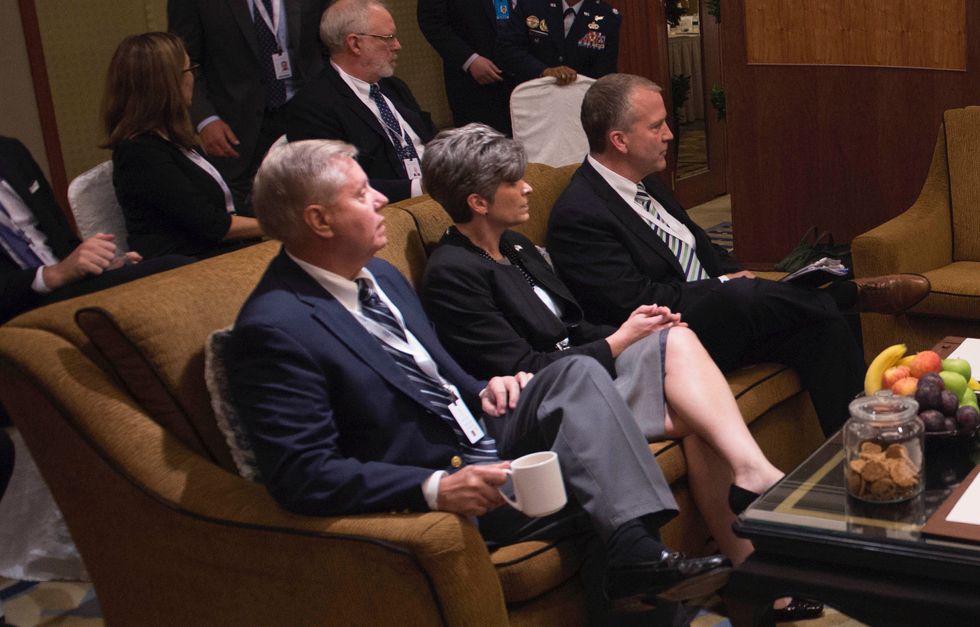 After four nights of a Republican convention that sought to erase coronavirus from voters' minds, Senate Republicans fighting to keep their majority this fall are in a bigger bind than ever.

Their dilemma was best demonstrated by North Carolina Sen. Thom Tillis, who tried and failed to simultaneously play footsie with Trump this week without getting burned. Though Tillis declined to play a prominent role in the convention, he still attended Trump's pro-super spreader acceptance speech Thursday night and was maskless to boot. By Friday morning, Tillis was apologizing after a picture surfaced of his pandemic breach. Prior to the speech, Tillis had posted a photo of himself at the event prominently donning a mask. Oops.

“I’ve stressed the importance of mask wearing throughout this pandemic and have tried to lead by example on this issue, but last night I fell short of my own standard,” Tillis said in a statement Friday. Tillis, who's trailing his Democratic opponent Cal Cunningham by several points, has tried to tie himself almost exclusively to Trump's pro-economic message, but his coronavirus misstep clearly worried his campaign.

It was likely exactly the type of problem GOP Senate Majority Leader Mitch McConnell hoped to avoid by making his appearance at the convention remotely. Even McConnell, who's not seen as among the GOP's most vulnerable targets, spent the week trying to counter-program the convention's attempt to pretend the pandemic doesn’t exist.

According to Roll Call, McConnell spent the week visiting Kentucky hospitals and plants that manufacture medical protective equipment like masks and face shields.

"Everywhere I go, every appearance I make, I emphasize wearing a mask and trying to [practice] socially distancing,” McConnell said earlier this week while visiting a facility that makes face shields. “It is the only thing each of us can do to try to prevent the spread until we get a vaccine.“

Nice try, McConnell. One thing he could concretely do to help is take up the House-passed HEROES Act, which would provide critical funding to states, locales, and schools to protect against spread of the pandemic. But McConnell's duplicity is telling—he at least wants voters to believe he's taking the coronavirus seriously even though he's legislatively kneecapping the pandemic response.

While several of the GOP's most vulnerable senators made video appearances during the online portion of the convention, Sen. Joni Ernst of Iowa was the only GOP incumbent to venture a primetime slot.

Appearing against a backdrop of hay bales and a tractor, Ernst's message was aimed exclusively at farm country. “For years, I’ve worked closely with the president for farmers in Iowa and across the country," she said, warning against the "liberal coastal elites and radical environmentalists" who support Biden.

It's a fascinating political play given that Trump's tariffs and trade war are what put her seat in jeopardy in the first place. In fact, Trump devoted a lot of his acceptance speech to bashing China over his own coronavirus failures. Those farmers will never get the trade deal that Trump promised and they were desperate for him to secure.

But the bet by Ernst, who is in a dead heat with Democrat Theresa Greenfield, is clear—she can sacrifice the suburbs of Iowa as long as she keeps a firm grip on farm country, which is still more loyal to Republicans.

Tillis, on the other hand, needs those more moderate suburbs very badly even as he tries to avoid ticking off Trump's cultists. The GOP convention's epic failure to address the coronavirus didn't make that tightrope walk easier for Tillis or any other vulnerable GOP senators.

As for Ernst, she's bet the farm on Trump.