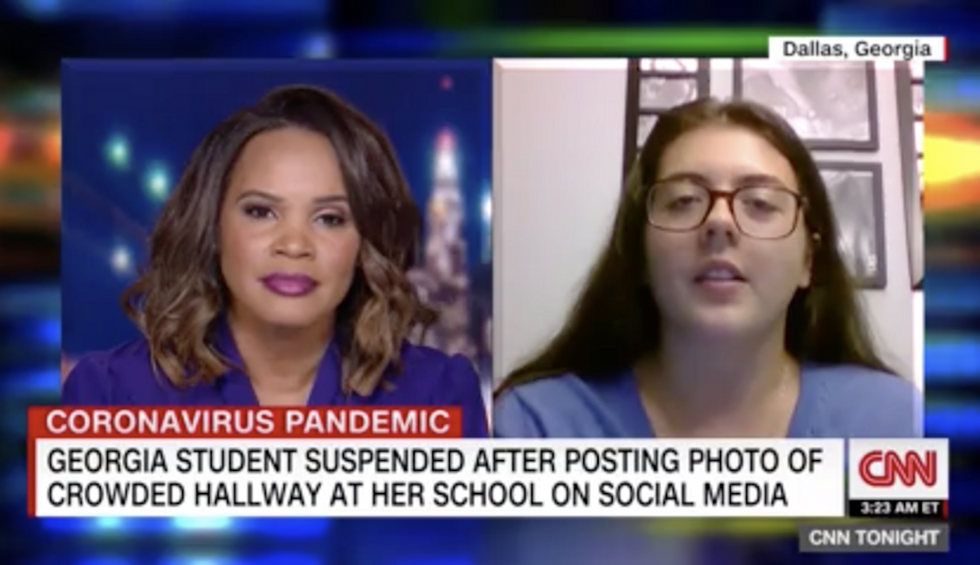 As schools are beginning to reopen with no realistic plan to contain the spread of COVID-19, two Georgia teens went viral for sharing images of the crowded hallways of North Paulding High School in Dallas, Georgia. Many, if not most, of the students in the hallway were not wearing masks. Both teens were suspended for five days for allegedly breaking school policies around using phones during school hours and posting images of other students.

Hannah Watters is one of the suspended teens. In an interview with CNN legal correspondent Laura Coates, Watters said she had no regrets about posting the photo. In a tribute to the legendary congressman and civil rights hero John Lewis, she said it was “good and necessary trouble.”

In an interview with The New York Times, Watters said her mom gave her great advice: “My mom has always told me that she won’t get mad at us if we get in trouble as long as it’s ‘good trouble,’ before adding, ‘You’re bettering society and bettering the world, so those consequences don’t outweigh the end result.’”

Check out the full interview (below) with this young person, who is no doubt going to go onto great things. She already seems to have more sense than the school administrators, who not only reopened school without a viable plan to keep everyone in the building safe, but then had the gall to suspend Watters for exposing their own mistakes. As comedian Roy Wood, Jr. said on Twitter: “They tried to (suspend) this child to teach her a lesson but all they did was free her up for 3 days of media rounds. ADVANTAGE: Student.”

In fact, trying to stifle the concerns of Watters and others—along with her suspension—only made the story grow larger. So large that Paulding County School administrators reversed the suspension on Friday and cleared it from her record.

And for what it’s worth, superintendent of Paulding County School District Brian Otott said in a statement: “Wearing a mask is a personal choice, and there is no practical way to enforce a mandate to wear them.” Which is really something when you consider the very restrictive guidelines the school district has when it comes to clothing—particularly girls’ clothing. The student handbook warns that there are strict dress code checks every morning. Somehow PCSD has perfected the policing of spaghetti straps, girls’ shorts, and tank tops, but they just can’t find a way to enforce a mask rule during a deadly pandemic.