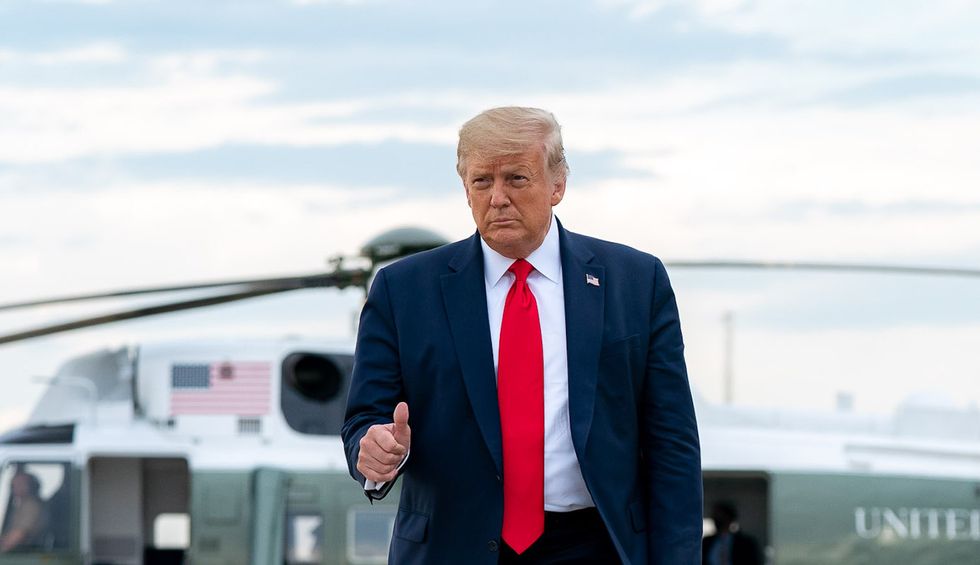 One of the more tedious tasks in writing about politics is that every single election year it's necessary to discuss the latest cheating schemes cooked up by the Republican Party to suppress the votes of minorities, challenge the legality of perfectly legal votes and otherwise make all elections they do not win look suspect in the eyes of American voters. Needless to say, this year is worse than usual because Donald Trump makes everything worse than usual.

But it's important not to ascribe the latest attempts to manipulate the election results solely to Trump and his minions. Even though he is more crude and obvious about what he's doing, he is actually following in a longstanding tradition of the modern GOP, traceable all the way back to the 1960s.

Obviously there has been cheating in elections since the founding of the republic. Once upon a time, it was institutionalized by the big-city bosses, who were almost entirely Democrats. For a century, African Americans were denied the vote by Democrats in the white supremacist Jim Crow South with the deployment of a whole arsenal of restrictions, including onerous poll taxes, literacy tests and residency requirements.

As everyone is aware, Southern party identification began to switch to the GOP in the 1960s with the civil rights movement and the passage of the Voting Rights Act, at which point the newly converted Republicans eagerly stepped up to the task of disenfranchising Black people and other ethnic minorities. They've been very creative about it ever since.

For instance, they've done "vote caging" ever since the '60s, as described in this voluminous report about the practice by Project Vote:

Voter caging is a practice of sending non-forwardable direct mail to registered voters and using the returned mail to compile lists of voters, called "caging lists," for the purpose of challenging their eligibility to vote. In recent years, other techniques, such as database matching, have been used to compile challenger lists.

They have used more direct forms of voter intimidation such as "Operation Eagle Eye" and the modern knockoff "True the Vote" and have created large, well-funded legal organizations, most notably the Republican National Lawyers Association and the Voting Integrity Project, devoted to challenging laws throughout the country that make voting accessible. This was the institutional legal apparatus that immediately launched into overdrive during the disputed presidential election in Florida in 2000.

For more than 50 years the Republican Party has been working feverishly to ensure that Democratic voters are denied the right to vote, especially African Americans and other minorities. It hasn't just been Southern white supremacists in deep-red states doing this. Such campaigns have been sanctioned and endorsed by the highest reaches of the Republican establishment. The corruption that lies at the heart of this project has been demonstrated by Republican Departments of Justice and the conservative majority of the U.S. Supreme Court, with essentially no repercussions.

So, let's not fool ourselves into thinking that because Donald Trump is crude and ignorant his current attempt to sabotage the November election by defunding the post office and delegitimizing the vote-by-mail system is an anomaly. It may not have the subtlety of vote caging or the elegant sophistry of insisting that counting all the votes will disenfranchise voters, but it's very much in line with the Republicans' ongoing program of vote suppression.

Trump is taking it to a new level, however, by attempting to suppress Republican votes right along with Democrats. For years the GOP has been pushing voting by mail to help their senior and rural constituencies who have tended to prefer it. R Roughly one-fourth of Trump's votes in 2016 were delivered by mail.

The attacks on the U.S. Postal Service are also going to hurt his own voters just as much as Democrats. Republicans like to get their mail on time too. And many of them are just as nervous about standing in line for hours on Election Day in the middle of a deadly pandemic as Democrats are — although there's some evidence that they will do it because their president wants them to.

Officials in Trump's claimed home state of Florida apparently convinced him that he could lose the state this way because he amended his blanket condemnation of voting by mail by claiming that Florida alone knows how to do it correctly. He and the first lady have already requested their mail-in ballots, which raises the question of why he can't go to the voting booth on Election Day as he expects everyone else to do.) But Trump still insists the rest of the country is incapable of running elections as efficiently as Florida (!) and cannot be trusted to handle a large number of mail-in ballots.

His obsession with the Postal Service originally stemmed from his erroneous belief that the main function of government is to make a profit (except for the military, of course, which is to be smothered in cash beyond any possible necessity). Trump is also jealous of Amazon billionaire Jeff Bezos and thinks he can destroy him by destroying the post office. Now he's attacking the agency in order to suppress the vote by making people believe their ballots won't make it in time and won't be counted for months, if ever.

All of this is downright self-defeating if he wants to get out his vote, but that's clearly not what he's trying to achieve. Recall that in 2016 he also claimed the election was "rigged" and during one presidential debates refused to say whether he would accept the results. He amended that shortly thereafter:

You may also recall that even when after he won his fluke Electoral College victor, Trump convened a "voter fraud" commission in an effort to prove that he had actually won the popular vote as well. It was quietly disbanded a few months later, without issuing any kind of report.

It appears that all this nonsense is in service of a plan to contest his defeat if the vote count is delayed or if there's any significant confusion, regardless of the vote margin. And he won't have to go it alone. The New York Times reported last May that the Republican Party was gearing up to help him:

The Republican program, which has gained steam in recent weeks, envisions recruiting up to 50,000 volunteers in 15 key states to monitor polling places and challenge ballots and voters deemed suspicious. That is part of a $20 million plan that also allots millions to challenge lawsuits by Democrats and voting-rights advocates seeking to loosen state restrictions on balloting. The party and its allies also intend to use advertising, the internet and Mr. Trump's command of the airwaves to cast Democrats as agents of election theft.

This isn't a Trump thing. It's a GOP thing. And it's been going on for a very long time. At some point, this country is going to have to come to terms with the fact that the Republican Party is fundamentally hostile to democracy and do something about it.