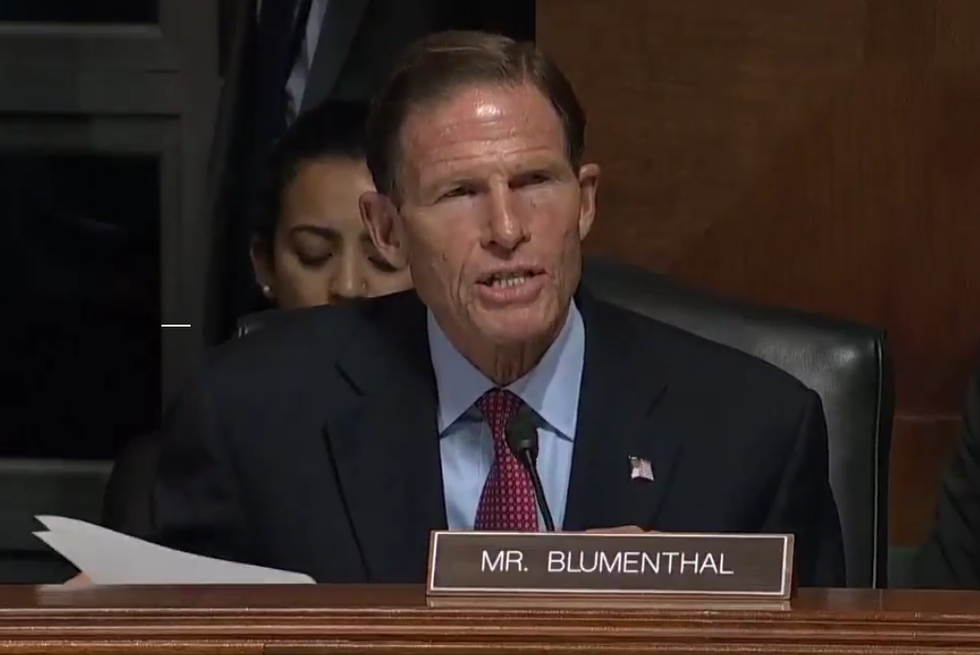 Congressional Democrats are sounding the alarm bells about 2016 redux playing out in this year's election with extensive foreign interference while American voters are left in the dark.

Shortly before a closed-door intelligence briefing for senators on Tuesday, Sen. Richard Blumenthal of Connecticut called the classified documents he had reviewed as "chilling."

"Declassify this information," he urged in a tweet. "Americans deserve & need to know about ongoing foreign interference (even sabotage) in our election system."

Now three of his Democratic colleagues have written to FBI Director Chris Wray, urging him to go public with the attacks being leveled at U.S. elections by foreign actors. The Democrats—Sen. Bob Menendez of New Jersey, the ranking member of the Senate Foreign Relations Committee; Senate Democratic Whip Dick Durbin of Illinois; and Sen. Jack Reed of Rhode Island, ranking member of the Senate Armed Services Committee—seem particularly concerned about foreign disinformation being targeted at Congress, laundered by certain members, and then disseminated to the public with the apparent imprimatur of a U.S. lawmaker. Specifically, Democrats believe they are seeing that play out with a probe GOP Sen. Ron Johnson of Wisconsin is currently leading into Joe Biden's Ukraine diplomacy while he was vice president.

“Senator Schumer and Speaker Pelosi noted in their July 13th letter to you that ‘Congress appears to be the target of a concerted foreign interference campaign, which seeks to launder and amplify disinformation in order to influence congressional activity, public debate, and the presidential election in November,’” the senators wrote to Wray, in a letter obtained by Politico. “We attended classified briefings from the intelligence community and FBI over the past week and our concerns with respect to this targeting have only grown.”

Pelosi and Schumer attached an addendum to their mid-July letter singling out Johnson's inquiry as a vehicle for the spread of Russian disinformation.

The briefings have detailed malign actions taken by both Russia and China. Politico reports that in one briefing, William Evanina, director of the National Counterintelligence and Security Center, admitted under pressure from Pelosi that Russia is specifically trying to help Trump get reelected while politically damaging Biden.

The briefings have also singled out Ukrainian individuals by name such as Andrii Telizhenko and Andrii Derkach who have made dubious claims about both the Democratic National Committee and Joe Biden. Both men also say they have turned over information to Sen. Johnson's investigators.

The letter from Menendez, Durbin, and Reed pressed Wray to brief all senators on the information so they would be aware of foreign efforts to manipulate them. “Members must understand the risks inherent in accepting information generated by foreign sources, especially those committees currently conducting investigations,” they wrote.

Johnson remains obstinate about such warnings, saying Democrats' objections only lead him to believe he's on the right track. Johnson, who gave Trump cover on his initial effort to illegally fabricate a Ukrainian investigation, seems dead set on delivering Trump the corrupt Ukraine probe that was scuttled last year by a whistleblower complaint. Apparently, voting to acquit Trump of soliciting foreign help in his reelection wasn't enough for Johnson. Now he's recreating the bogus investigation that even Ukrainian officials refused to conduct.

It should be incumbent on the FBI to make crystal clear to the American people who's trying to manipulate this election and how they are trying to do so. Nothing less than the integrity of U.S. elections and the future of the republic are at stake.