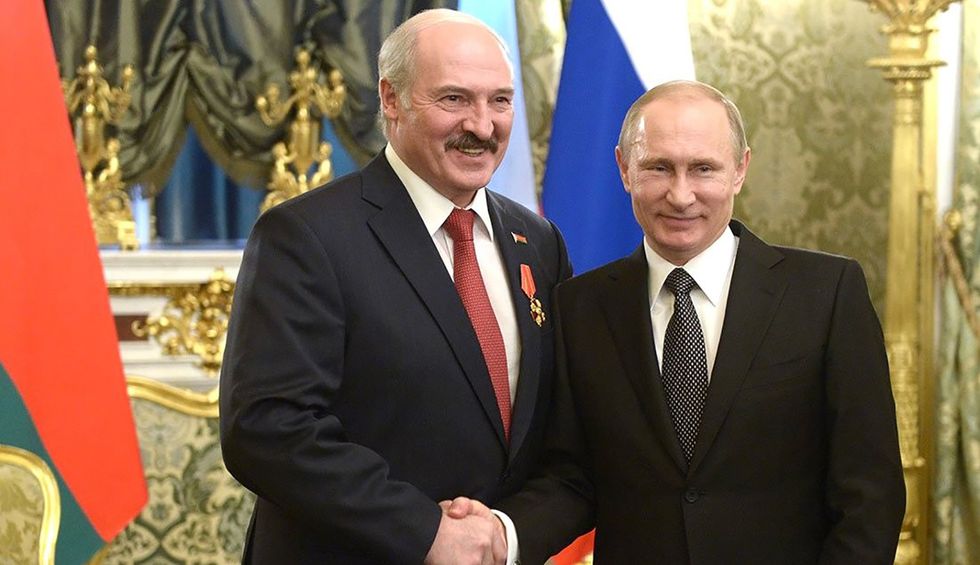 Photo via The Kremlin.
The Conversation
August 11, 2020 World

Alexander Lukashenko, the authoritarian leader of Belarus who came to power in 1994, has won his sixth presidential election. The preliminary results show a landslide victory, giving Lukashenko 80% of the vote and his main opponent, Svetlana Tikhanovskaya, just 10%. Nationwide protests have broken out in response and we should view these results as falsely reported.

Election day itself was full of strange anomalies: internet access was reportedly disrupted and independent observers say they were prevented from monitoring the vote. There have even been suggestions that turnout exceeded 100% at some polling stations.

After the state-controlled exit polls showed victory for the president, nationwide protests broke out. Thousands of people who were outraged with the results took to the streets. In more than 30 cities demonstrators clashed with police, who responded to their marches with excessive violence.

There were clear signs that Lukashenko was preparing to face such a backlash from an early stage. During the campaigning period, he seemed more focused on visiting military bases than meeting the public. Anti-riot equipment was brought into the country’s capital before the election.

In Minsk, riot police used rubber bullets, tear gas and shock grenades on unarmed people. About 3,000 were detained during the protests. According to human rights centre Viasna, one person died after being run over by a security-forces vehicle and many other protestors were injured.

Lukashenko had been confronted by an unexpectedly strong opponent in this election in the form of Sviatlana Tikhanovskaya, a former teacher and a housewife who did not originally plan running at all. It was her blogger husband, Sergei Tikhanovsky, who had harboured presidential ambitions. Not long after declaring his intention to run, Tikhanovsky was arrested and prevented from registering as a candidate. His wife took up the torch and managed to become a candidate herself. She has rejected the official results, and more protests are planned for the coming days.

It is perhaps ironic that Lukashenko faced his gravest challenge from a unified front of three women – Tikhanovskaya herself, Veronika Tsepkalo, the wife of another opponent who was unable to stand, and Maria Kolesnikova, the campaign manager of another. Tikhanovskaya was allowed to proceed in the election, with Lukashenko not initially seeing her as a great threat. Lukashenko has in the past disparaged the possibility of a female president, claiming that a woman would “collapse” under the weight of such responsibility.

The campaigning efforts of these three women in an authoritarian state like Belarus have been highly impressive. They held rallies across the country to a rapturous response. At one point, a rally in Minsk in support of Tikhanovskaya attracted more than 63,000 people.

The genie leaves the bottle

Despite the result of this vote, the situation is not entirely hopeless in “Europe’s last dictatorship”. Change is, without doubt, in the air. There is a new willingness to challenge the regime, and unprecedented mobilisation – as was seen both before and after the election. In some smaller cities there were reports of security forces lowering their shields rather than reacting violently. This is potentially a sign that Belarus is at a tipping point, although it is difficult to say what will happen next.

Belarusians are increasingly unable to tolerate the authoritarian tactics of Lukashenko and the determination to oust him is clear. While Tikhanovskaya has obviously had a galvanising effect, the protests were not initiated by her but rather represent an outpouring of anger against the regime.

Lukashenko’s power is becoming fragile. He has relied on a mixture of repression and elite loyalty, but also, to an extent, popular support. This latter pillar has been eroding over the years, with the last independent poll conducted in 2016 showing only 30% support for the president. A worsening economy, the chaotic handling of the pandemic, and the emergence of an energising opponent have all served to widen the disconnect between the Belarusian president and people.

Internationally too, Lukashenko walks away from the election weakened. His attempts in recent years to build better relations with the EU to counterbalance the influence of Russia are likely to be undermined, especially after the violent crackdowns of post-election protestors. The EU imposed sanctions after similar repressive actions following the 2010 election, and some member states are already raising the possibility of applying them again.

Improved ties to the west had been crucial to Lukashenko in fending off pressure from Vladimir Putin for closer integration between the two countries. Any damage to these ties is likely to result in the president losing bargaining power with Russia. That would really put Lukashenko in a tricky spot. Whatever the actual results of the election, the genie has been well and truly let out of the bottle.