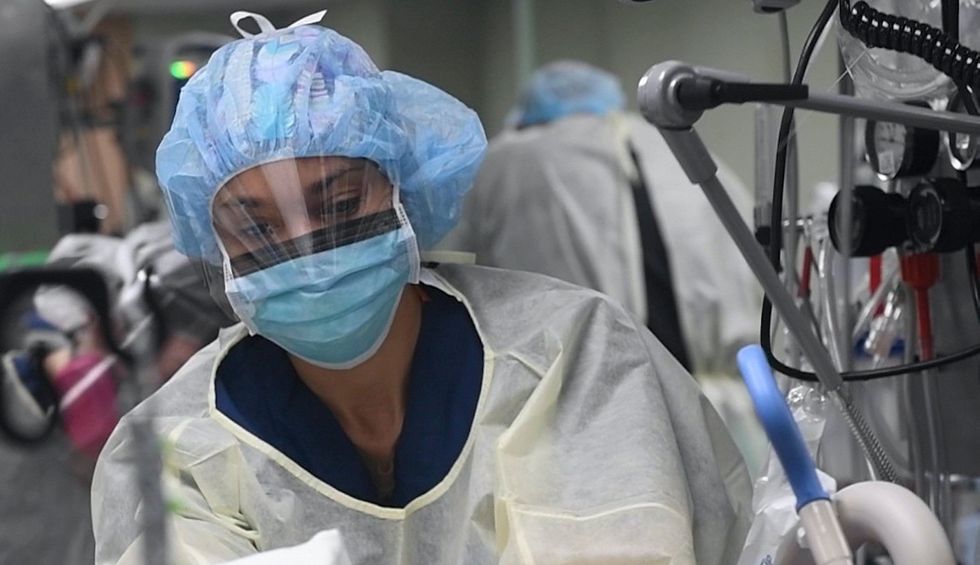 A handout photo made available by the US Navy shows Lt. j.g. Natasha McClinton, an operating room (OR) nurse, preparing a patient for a procedure in the intensive care unit (ICU) aboard the US hospital ship USNS Comfort (T-AH 20) in New York, New York, USA, 23 April 2020 (issued 26 April 2020), during the coronavirus disease (COVID-19) pandemic. Comfort, which cares for critical and non critical patients without regard to their COVID-19 status, is working with Javits New York Medical Station as an integrated system to relieve the New York City medical system. EPA/US NAVY/MC2 SARA ESHLEMAN HANDOUT HANDOUT EDITORIAL USE ONLY/NO SALES Dostawca: PAP/EPA.
Mark Sumner
and
Daily Kos
August 30, 2020

Just a week ago, there was a case in Hong Kong in which the data suggests that a man caught COVID-19 for a second time. Despite the dire headlines that accompanied the (still) un-reviewed article, the news from this event was generally not all that terrifying. The man in question had a mild case the first time around, and it’s been known for some time that many patients with a mild case of COVID-19 will have equally mild antibody production. The second infection, detected only after a required test on a return from Europe, was every milder—asymptomatic, in fact. Coming away from this paper it appeared that: reinfection by COVID-19 appeared to be rare; such infections were likely limited to patients whose initial infection was mild; reinfection from the SARS-CoV-2 virus appeared to result in an even milder cases than the initial infection; and the four month interval between the two infections appeared to indicate that even an mild initial case had generated a period of protection. So big sigh of relief there, everyone because…

Damn. Now a second such case has appeared. This time it’s a pre-print of a paper concerning a 25-year-old man in Nevada, and just everything about it seems wrong. Not wrong as in “boy, those researchers are smoking something,” but wrong as in it just defies all expectations.

The patient in this case first developed some of the familiar symptoms of COVID-19 in late March. These included dry cough, sore throat, headache, diarrhea, and nausea. He tested positive for the virus on a PCR swab test taken April 18. Even though he began to feel better soon after, and did not need to be hospitalized, the panoply of symptoms would certainly indicate that his case tipped into the “mild to moderate” category. By April 27, the patient reported that his symptoms had passed. Following a period of self-isolation, he was tested again for COVID-19 on May 9 and May 26. Both of those tests came back negative.

But just two days after that last test, on May 28, the patient began to experience a return of all the previous symptoms, this time accompanied by dizziness and fever. After several calls to the doctor, and a new chest X-Ray, the patient came back to his doctor’s office on June 5 with shortness or breath and muscle aches. A quick check showed that the patient had low oxygen levels. He was directed to the emergency room, admitted to the hospital, and given oxygen. Another X-Ray was performed, showing new opaque areas in his lungs. On June 6, he got another test for COVID-19, and again tested positive.

The first infection brought on mild-moderate symptoms. However, the second infection was more severe than the first, requiring hospitalization, the administration of oxygen, and causing notable damage to the patient’s lungs.

Unlike the man in the Hong Kong case, the Nevada patient appeared to enjoy essentially no period of protection from reinfection. And unlike the Hong Kong case, the initial infection did not seem to restrict the strength of the second infection. If this was happening frequently, it would suggest the kind of nightmare scenario that some worried about when the 2019 novel coronavirus first emerged: A disease that can infect people over and over, with no protection provided by previous infection, and the possibility that each reinfection could build on the past, as happens with Dengue fever.

Only it’s not happening with great frequency. The one big point of similarity between the Hong Kong case and the Nevada case appears to be that this is a rare thing. The doctors in Nevada chose to sequence the the virus in this patient because his situation was so unlike anything else they had observed.

A) There’s the possibility that the virus was actually present in the patient all along, and the genetic differences are just an artifact of a rate of mutations / substitutions that, in this case, ran higher than the average. COVID-19 has been known to linger for a prolonged period in many patients, and while a 3-fold increase in the rate of substitutions seems unlikely, the truth is we’re talking about very small differences. Small enough that statistical anomalies are absolutely possible. Both of the samples were in “clade C” of the SARS-CoV-2 virus, meaning that, unlike the Hong Kong case, they were not distinct forms of the virus known to be dominant in different regions of the world. Though the paper presents the possibility of the changes as “vanishingly remote,” the changes here seem to be not quite so unlikely as they propose.

B) The results could have more to do with the patient than the virus. The doctors involved seemed to have taken this somewhat into account, because they tested the patient for HIV. But not every person with a weakened immune system has HIV. The man in the Hong Kong case did not generate a high enough level of antibodies from his first exposure to the virus to test positive in an antibody test. That may also be the case with the Nevada patient. There does not seem to be any mention of serology testing in the Nevada case, or results for antibody titers. It’s possible the patient never developed a response to COVID-19 at all. From the data provided in the pre-print, it does not seem possible to determine whether the patient mounted an antibody response after the first infection — if they researchers tested it, they didn’t share their results.

The researchers in the Hong Kong case were quite moderate in describing their results and in drawing conclusions for what it meant more generally. Unfortunately, this doesn’t seem to be the case in Nevada. Dr. Mark Pandori, director of the Nevada State Public Health Laboratory, is one of the co-authors on the paper, and he seems to have been everywhere in the last few days, sending messages that could be overlain with the theme music from Jaws.

There has also been an extremely unfortunate tendency in the media and in social media comments to focus on the idea that the “virus is mutating so quickly that we’ll never develop immunity!” We don’t know much, but this is absolutely not the case. The level of mutations in the Nevada case—even the much greater differences in the Hong Kong case—are very minor. They do not affect the general structure of the virus, its means of attaching to and penetrating human cells, or how it replicates within the cell. They do not rise to the level where antibodies against any of these strains would not be effective against all of these strains. The virus is not mutating past our defenses. This does not mean that vaccines are useless, doom is on us all, and it’s time to start checking out parachuting sans parachute. Not at all.

The truth is … we don’t know what this means. We do know that, even with the addition of what appears to be a third case in Belgium, evidence of such reinfections remains extremely rare. Again, if people were getting routinely reinfected, it would be obvious. That is not what doctors are reporting.

It is absolutely possible that in the next few months there will be a significant rise in reinfections as people who had mild or asymptomatic cases of COVID-19 back in February and March reach the point where it’s been over five or six months since their recovery. It’s already known that antibody levels from these mild cases are low, and that antibody levels drop over the months following infection. Antibodies are far from everything when it comes to measuring immune response, but it’s entirely possible that people who experienced COVID-19 at the beginning of the pandemic, will increasingly be at risk of reinfection. In fact, we should expect this.

But we should not expect that what happened in Nevada is the norm. That case is going to need additional review, and it’s going to be interesting to see what kind of response is generated during peer-review of the paper.