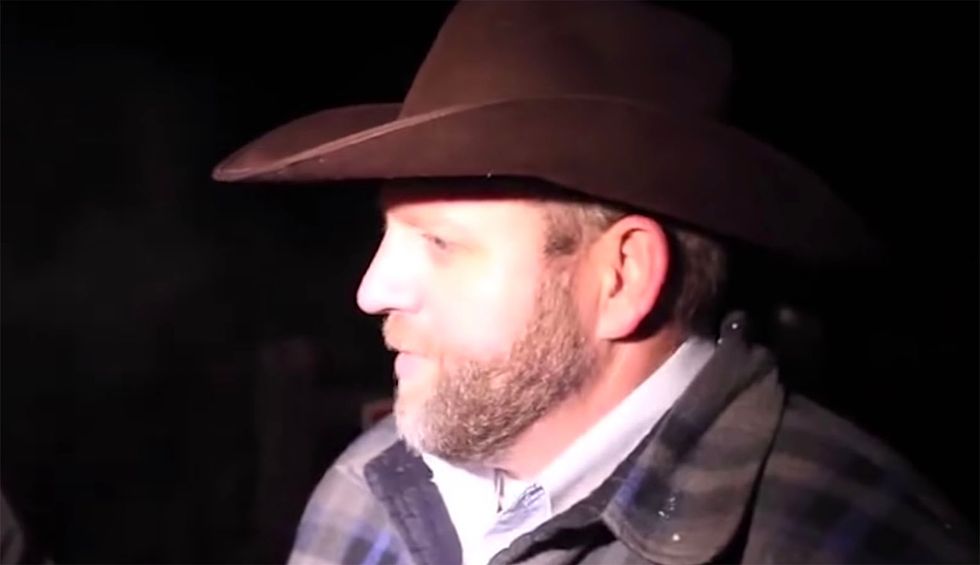 If there is one thing we already know about Ammon Bundy, it’s that he’s anointed himself the arbiter of all things constitutional and legal—which is why he’s so frequently inclined to ignore the laws he considers “unlawful,” including the federal government’s ownership of the Malheur National Wildlife Refuge, as well as the efforts of Idaho’s governor to clamp down on the COVID-19 pandemic.

And it’s why he was arrested twice in two days for his obstreperous attempts to lead a “people’s rights” revolt against Idaho state leadership during the opening days of a special legislative session intended to deal with pandemic-related state business. After leading a rowdy crowd of protesters on Monday who pushed past state troopers, broke a glass door and filled both legislative galleries and committee-hearing rooms beyond social-distancing requirements, Bundy was arrested Tuesday (and banned for a year from the Statehouse) for refusing to leave a hearing room—and then arrested again Wednesday for ignoring the ban.

Both arrest scenes were notable for Bundy’s passive non-cooperation, leading to state troopers carting him out the door on the same wheeled chair in which he sat in the meeting room after he refused to leave on Tuesday—and then somewhat repeating the scene Wednesday, with Bundy first being bodily dragged out of the legislative chambers and then being wheeled out of the building in a wheelchair.

No one was arrested after Monday’s riotous opening. However, on Tuesday, Bundy and a cluster of his anti-state-of-emergency supporters flooded another committee hearing in the Lincoln Auditorium of the Statehouse—and became so raucous that legislators cancelled the hearing and moved the hearing to another location.

Bundy and his cohorts had occupied the section of the hearing room normally reserved for members of the press, and afterwards, they chose to remain—and then refused to leave when state officials attempted to close the room. So a large phalanx of Idaho State Troopers marched into the room, ordered everyone still present out, and then arrested Bundy and two of his supporters when they refused to leave their seats.

Bundy was rolled out of the building in the office chair, with his hands bound behind his back. He was released shortly afterwards at the Ada County Courthouse, and informed that as a result of his arrest, he was banned from the Statehouse for a year, and would be considered to be trespassing if he attempted to return.

Republican House Speaker Scott Bedke condemned the incident: “The events that have taken place over the past couple of days are unacceptable. It is important to protect the rights of all to participate in the process, not simply those who are the most aggressive and have the loudest voices,” Bedke said in a press release. “Unfortunately, a small group of individuals have disrupted what should be a deliberate and fair process. The end result has been chaotic and unproductive.”

Still Bedke was optimistic, saying he hoped legislators could get back to work “without further distractions.”

Instead, Bundy showed back up again on Wednesday, seated this time with a group of supporters in the gallery of the Senate chambers—utterly indifferent to the warning against trespassing he had received the day before. Security officers and ISP officials confronted him, asked him to leave, and when he refused, arrested him.

This time, he was carried out bodily to a secured area, then apparently placed in a wheelchair and taken out of the Statehouse again through an underground tunnel and put in a police vehicle.

Bundy has taken the lead role in organizing right-wing extremists’ “resistance” to Gov. Brad Little’s stay-at-home orders and other anti-pandemic measures. So far, he has organized an Easter celebration that defied the state’s social-distancing rules, helped promote an “anti-vaccination” mother’s attempt to make a martyr of herself by ignoring the shutdown of a Meridian playground, and tried to bully his way inside a district health-board meeting that was actually being held online.