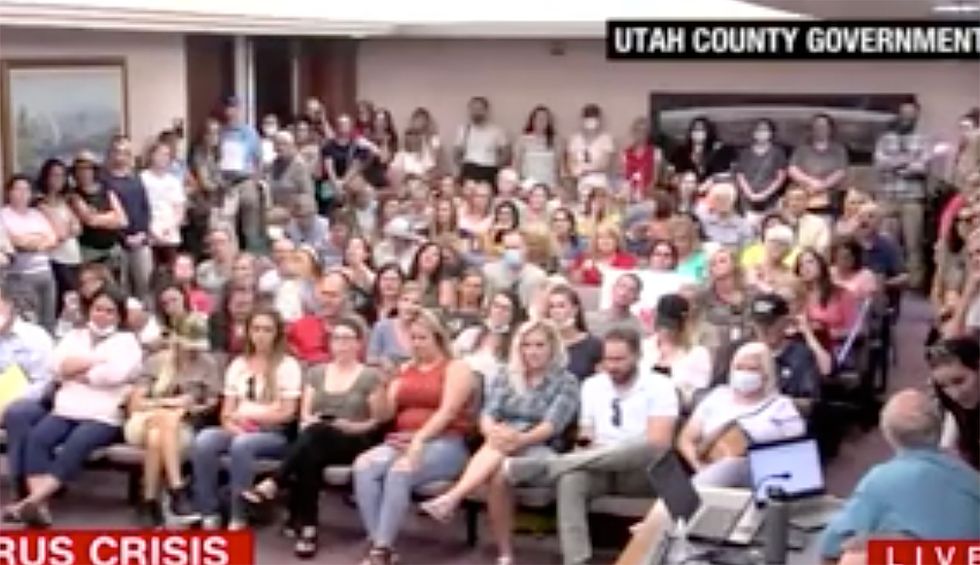 Despite consistent pleas from health experts and research backing the claim that masks significantly prevent the spread of COVID-19, people still refuse to wear them. Anti-maskers continue to resist nationwide. First they protested state lockdowns and safety protocols; now anti-maskers are protesting mandates that require children to wear masks in school.

Dozens of maskless demonstrators crowded the Utah County Commission meeting in Provo on Wednesday in protest of a state order issued by Utah Gov. Gary Herbert mandating that students wear masks in school. The protesters yelled phrases such as “let kids be kids, no masks” and “don’t smother the children,” arguing that it was their right to decide whether or not their children would wear masks to school.

Last week, Herbert announced that students and teachers in most districts can return to in-person classes on one condition: mandatory masks. As The Washington Post reported, social distancing in some public places, like crowded school buses and school hallways, is nearly impossible. In these sorts of situations, the Centers for Disease Control and Prevention has officially recommended wearing a face covering in public.

Prior to the meeting, Utah Country Commissioner Bill Lee voiced his opposition against the mandate and introduced a proposal requesting officials implement a “compassionate exemption” which allows parents and teachers the ability to decide whether or not masks are necessary. Additionally, he encouraged people to meet and “peacefully express their concerns” on the mask policy, The Salt Lake Tribune reported.

Shortly after starting, the meeting was adjourned by Tanner Ainge, chair of the commission. Ainge referenced the lack of attention toward health guidelines, including several of the individuals gathered without masks, as a reason to cut the meeting short. “This is the exact opposite of what we need to be doing,” Ainge can be heard saying in a video. “We are supposed to be physically distancing, wearing masks.” He was booed by the crowd of protestors.

While Ainge left the meeting, two other commission members stayed to hear out the crowd. In an interview with The Washington Post, Ainge said the crowd’s message was being directed to the wrong aspect of government. “This had no business being on our agenda,” he said. “The county has nothing to do with this. It would be like the school board deciding how much money to give to the sheriff’s department.”

Concerns shared at the meeting ranged from absurd to logical. While some parents shared concerns regarding children with disabilities being required to wear a mask in addition to teachers being unable to spot signs of abuse with children’s faces covered, others called the virus a “hoax” and suggested masks provide a lack of oxygen.

“We are perpetuating a lie,” one woman who claimed she has five grandchildren of school age said, according to The Salt Lake Tribune. “COVID is a hoax. It’s a lie. It’s a political stunt.” Others argued that their children would grow up fearing the world and that a mask would contribute to the inability of them to socialize properly. “It’s going to rewire their brains,” one woman said. “I’m especially not going to send my son back to have his mind broken.”

The difficulty of enforcing the rule on young children, especially in cafeterias, was also brought up. Overall those attending in protest reiterated the idea that the virus was not as serious as officials are making it out to be. “This mandate for the children to wear masks is baloney,” Cynthia Harding, a local resident told The Salt Lake Tribune. “We have the right to make our own choices.”

Health officials still stand in agreement that the best way for the state to decrease its surge in cases is for all residents to wear a mask. “This is like a wildfire going on. If everybody had a mask on … life can go on,” Dr. Kashif Memon, an infectious disease specialist at Jordan Valley Medical Center and Steward Health Care Group, said. “It’s a simple trade off.”

During an online forum hosted by The Salt Lake Tribune on Wednesday, health and education officials came together to discuss the importance of implementing a mask rule for the safety of children in schools. Sydnee Dickson, Utah state superintendent of public instruction, noted that for some children with disabilities masks may be difficult and that she is open to exemptions in those cases. “You can’t have kids moving through halls without masks on. You can’t have students entering and exiting where you’ve got density without masks on,” Dickson said. Dickson added that social distancing was not enough as research has found that respiratory droplets carrying the novel coronavirus can stay in the air for about 15 minutes.

According to data released by the county health department, as of this report Utah county has reported more than 5,500 positive cases of coronavirus and almost 30 deaths as a result of the pandemic. Within the state, more than 30,800 COVID-19 cases have been reported.

“As our hospital utilization and case counts climb, this is not the time for a County Commissioner to encourage large unmasked gatherings or to publicly reject the guidelines we are receiving," Ainge said in a statement shared on Twitter.