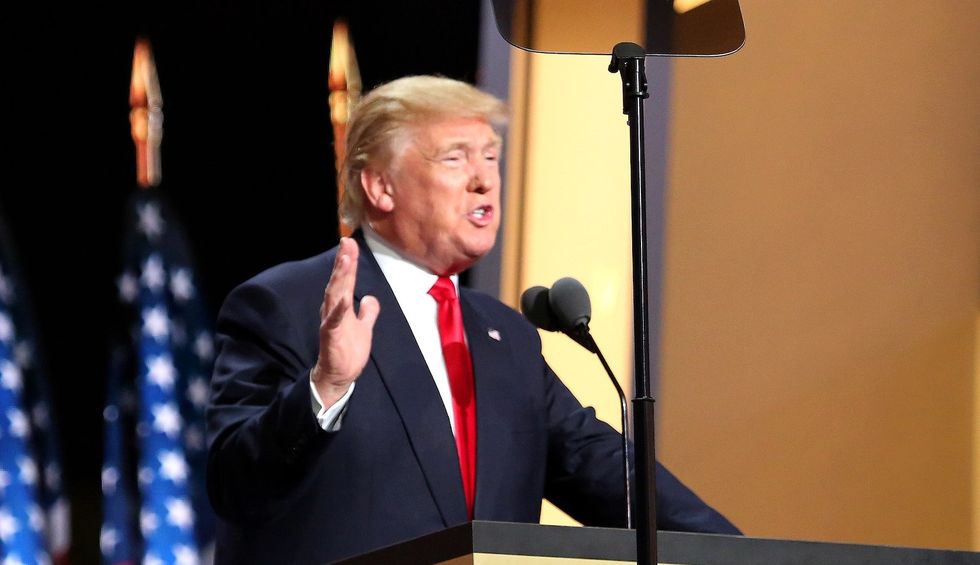 Weeks after President Donald Trump said he would hold his convention speech in Florida in response to North Carolina's coronavirus restrictions, the host city of Jacksonville imposed a requirement for face coverings in public amid an alarming rise in cases.

The city announced on Monday its new mask requirement. Mayor Lenny Curry, a Republican who lobbied for the convention and pushed back on a mask requirement, was absent from the announcement, according to The New York Times.

Jacksonville landed Trump's Republican National Convention speech after the president balked at North Carolina's social distancing and mask requirements. While the business portion of the convention will still be held in Charlotte, the original host site, Trump is expected to accept the nomination at Jacksonville's VyStar Veterans Memorial Arena.

The speech was moved after Trump excoriated North Carolina Gov. Roy Cooper, a Democrat, because the state's coronavirus restrictions would prevent the convention from packing the arena.

"Since the day I came down the escalator, I've never had an empty seat, and I find the biggest stadiums," he told Cooper earlier this month, before appearing in front of a half-empty arena in Tulsa. "I don't want to be sitting in a place that's 50% empty."

A Republican official told The Washington Post that Trump would only hold the convention in a city "without social distancing or required masks."

While it remains unclear how long the mask requirement will last, Florida has done little in response to the skyrocketing rise in cases over the last two weeks. The requirement was imposed after the number of cases in Duval County, which includes Jacksonville, rose to 384 new cases per day from 32 per day only two weeks ago. Florida has emerged as one of the new epicenters of the virus in the country, along with Texas and Arizona.

The Republican National Committee said in a statement that it would comply "with local health regulations in place at the time."

"The event is still two months away, and we are planning to offer health precautions, including but not limited to temperature checks, available PPE, aggressive sanitizing protocols and available COVID-19 testing," the statement said.

The convention, which is scheduled for Aug. 24 - 27, has become a controversial issue in the city. Curry's approval rating slid from a +9 net positive job-approval rating to a -4 net rating in just one month, according to a poll which found that 58% of Jacksonville voters oppose hosting the Republican convention.

A group of about 200 Florida doctors sent a letter to Curry last week urging him to postpone the convention, noting that up to 40,000 people are expected to attend.

"Allowing this number of people to descend on Jacksonville is unequivocally provocative of disease, predictably harmful and medically disrespectful to the citizens of this city, much less the rest of the country," the letter said. "There will be increased hospitalizations, long-term health problems and deaths. At greatest risk are our most vulnerable populations: the poor, the elderly and those with underlying conditions."

Masks have become a political issue, leading Republicans who had urged states to reopen their economies to encourage people to wear masks in order to avoid another shutdown. Trump has refused to wear one, even in cities where they are mandatory.

Senate Majority Leader Mitch McConnell, R-Ky., said in a Senate floor speech on Monday that "we must have no stigma — none — about wearing masks when we leave our homes and come near other people."

But the Trump administration has sent mixed messages. Vice President Mike Pence on Monday urged people to wear masks before attending a 2,200-person rally in hard-hit Texas featuring a 100-person choir that sang without masks.

The White House has refused to encourage masks, deferring Monday to local officials.

"I talked to the president before coming out here," White House press secretary Kayleigh McEnany said. "It's his choice to wear a mask. It's the personal choice of any individual as to whether to wear a mask or not. He encourages people to make whatever decision is best for their safety, but he did say to me he has no problem with masks and to do whatever your local jurisdiction requests of you."