Trump stuns observers as his press conference goes off the deep end: 'Self-destruction of the president' 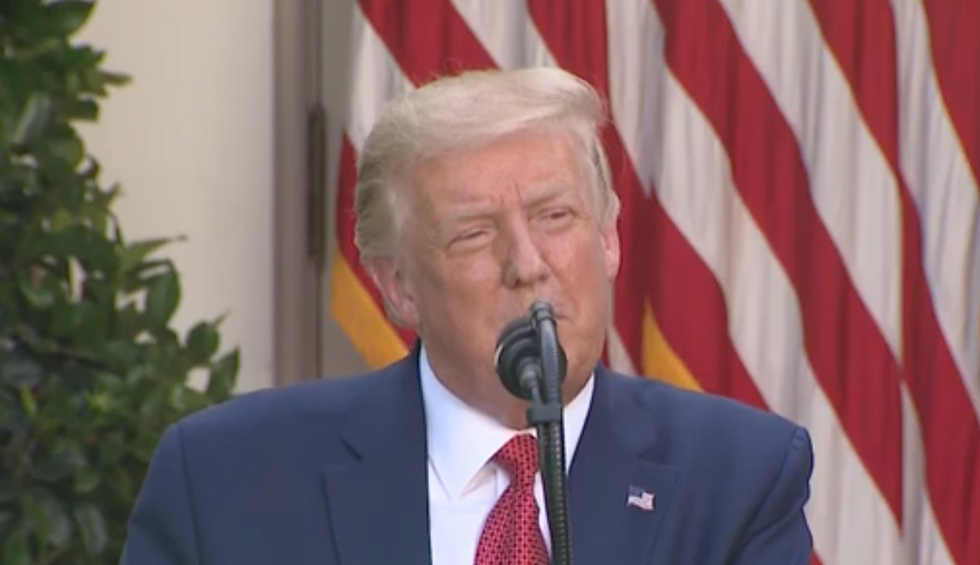 President Donald Trump clearly misses holding rallies filled with thousands of his fawning supporters hanging on his every self-aggrandizing word. So on Tuesday, at a press event ostensibly staged to discuss his new executive order withdrawing recognition of Hong Kong as independent from China, he decided to indulge himself by launching into a meandering campaign-style monologue for the reporters in attendance.

He leaped from topic to topic, sometimes in a single run-on sentence, and often failed to complete thought. He took aim at his election opponent, former Vice President Joe Biden, attacking a laundry list of the Democrat's policies that he twisted and distorted. Recalling a campaign theme he has long ignored, Trump called out Biden's son, saying: "Where's Hunter?"

And he returned to many of his favorite topics, such as immigration. He boasted of his relationship with Mexican President Andrés Manuel López Obrador and warned that a President Biden would tear down the wall he has started to build on parts of the U.S.-Mexico border.

“Probably never been a time when candidates are so different," Trump said.

There was no consistent thread or argument to his ramblings, aside from his own supposed greatness. It was pure stream of consciousness, supplemented by factoids apparently printed on notes on his lectern. He claimed to be the defender of African Americans at one moment because he favors school choice, but then slipped into attacking low-income housing and saying he'd preserve the suburbs — an unsubtle code for protecting white neighborhoods.

He lied so constantly that CNN's Daniel Dale, one of the president's most assiduous fact-checkers, noted that he couldn't cover the speech in real-time on Twitter because there were just so many falsehoods.

Many observers also noted that, given that this was a White House event, it was wildly inappropriate and potentially illegal for him to hold what was essentially a campaign rally.

"This is an official White House event in the Rose Garden but President Trump has spent much of his remarks here lashing out at former VP Joe Biden and other Democrats," said PBS NewsHour reporter Yamiche Alcindor.

Others expressed alarm at the president's conduct.

The Lincoln Project, a group of Republicans opposed to the president, was even harsher:

The Times' Maggie Haberman reported that the president's own staff have tried to avoid exactly these kinds of situations.

"This event is another data point as to why Trump aides have been keeping him from doing briefings. He can’t even stay on the topic of Hong Kong," she said. "It’s just a grievance session."

My God, he is rambling about the statue vandalization law and explaining how this makes him a starkly different choice from Joe Biden
— Tom Nichols (@Tom Nichols)1594765193.0

Even a Fox News host recognized how brazenly inappropriate Trump's actions were:

Most distressing of all, though, was that Trump still seemed to have no sense of the gravity of the pandemic that is still raging in the United States. He repeated his false argument that there are only more cases in the U.S. because there is more testing, and he essentially ignored the state of economic and public health crises that remain out of control.

"If I wasn’t here to stop it, we'd be in some mess,” he said with no sense of irony.