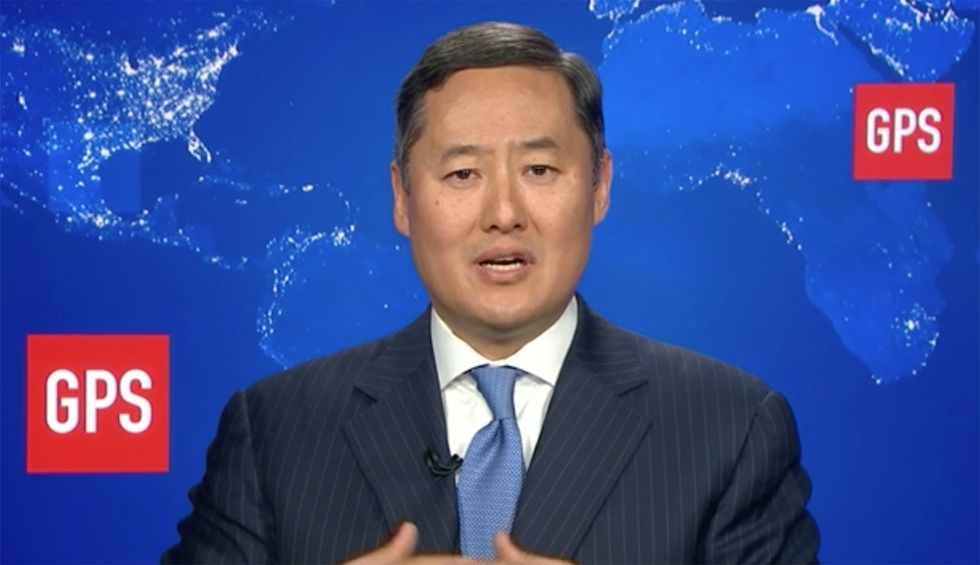 Progressives are raising alarm after news Sunday that President Donald Trump is reportedly looking to move forward with a series of extralegal maneuvers to further his agenda by bypassing Congress with use of a legal argument from John Yoo, the lawyer notorious for- helping craft the justification of torture in the George W. Bush administration.

"The fun part is that Yoo frames this as 'making it easy for presidents to break the law,'" tweeted journalist David Dayen "and Trump jumps on it and says 'yes let's do that.'"

According to Axios, which broke the news of the new White House strategy Sunday evening, the president is relying on a legal argument in an article Yoo wrote in June for the National Review after the Supreme Court's Department of Homeland Security v. Regents of the University of California ruling.

The court upheld former President Barack Obama's 2012 Deferred Action for Childhood Arrivals (DACA) program, which Trump had attempted to repeal without setting up a new regulatory framework to replace it. Therefore, Yoo argued, the court ruled that the White House can use its own discretion on enforcing the law to effectively set policy.

Suppose President Donald Trump decided to create a nationwide right to carry guns openly. He could declare that he would not enforce federal firearms laws, and that a new "Trump permit" would free any holder of state and local gun-control restrictions.

Even if Trump knew that his scheme lacked legal authority, he could get away with it for the length of his presidency. And, moreover, even if courts declared the permit illegal, his successor would have to keep enforcing the program for another year or two.

While Axios editor Sam Baker noted that the interpretation was "a somewhat strained reading of both procedural history and the law," the White House appears to be taking it seriously. The president has referred to the Yoo article in conversations with administration officials, according to Axios, and hinted in an interview Sunday with Fox News' Christopher Wallace that executive action on healthcare and immigration is coming soon.

"The Supreme Court gave the president of the United States powers that nobody thought the president had, by approving, by doing what they did—their decision on DACA," said Trump, adding that in his view, "the decision by the Supreme Court on DACA allows me to do things on immigration, on health care, on other things that we've never done before."

Critics noted the reappearance of Yoo in making the case for expanded presidential powers and expressed regret that Obama, upon taking office in 2009, did not take action to hold the Bush administration accountable for its crimes.

"John Yoo is a psychopath" and "George Bush was at least respectful of democratic norms" are inconsistent.
— Matt Stoller (@Matt Stoller) 1595203480.0

The involvement of Yoo in the president's latest scheme to avoid Congress, Georgetown professor Don Moynihan said on Twitter, is a reminder that the current president is not so out of step with his Republican predecessor.

"The centrality of John Yoo, and his message that SCOTUS 'makes it easy for presidents to violate the law,' reminds us that there is a lot of continuity between the Bush and Trump administration, including an almost limitless view of executive power," said Moynihan.