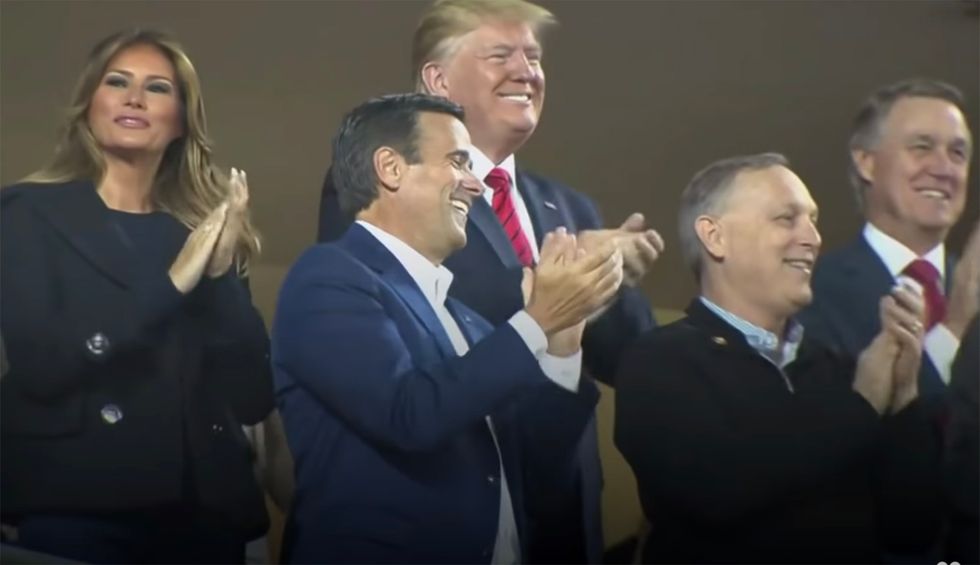 Just before Dr. Anthony Fauci tossed out the first ball of Major League Baseball’s opening day last Thursday, President Donald Trump announced the president of the New York Yankees, Randy Levine, had invited him to toss the first pitch for the New York team on August 15.

He was one-hundred-percent lying.

Trump apparently had been asked years prior, as in, “You should come and do that some day,” what some would call an open invitation. There had not been a formal invitation, no date set, and until he made that announcement, the Yankees had neither been asked nor told.

But he did it, The New York Times reports, because he was jealous of Dr. Fauci.

“Randy Levine is a great friend of mine from the Yankees,” Trump told reporters on Thursday, just one hour before Fauci threw the first ball. “And he asked me to throw out the first pitch, and I think I’m doing that on August 15 at Yankee Stadium.”

“There was one problem,” the Times explains. “Mr. Trump had not actually been invited on that day by the Yankees, according to one person with knowledge of Mr. Trump’s schedule. His announcement surprised both Yankees officials and the White House staff.”

Trump “had been so annoyed by Dr. Fauci’s turn in the limelight, an official familiar with his reaction said, that he had directed his aides to call Yankees officials and make good on a longtime standing offer from Mr. Levine to throw out an opening pitch.”

On Sunday, for reasons unknown, Trump “canceled,” so to speak, making a big deal out of his “change” of plans.

Because of my strong focus on the China Virus, including scheduled meetings on Vaccines, our economy and much else,… https://t.co/RCuaQWosOq
— Donald J. Trump (@Donald J. Trump)1595792651.0

Regardless, his tweet “canceling” was quickly panned by many on social media, who could tell he had been lying from the start.