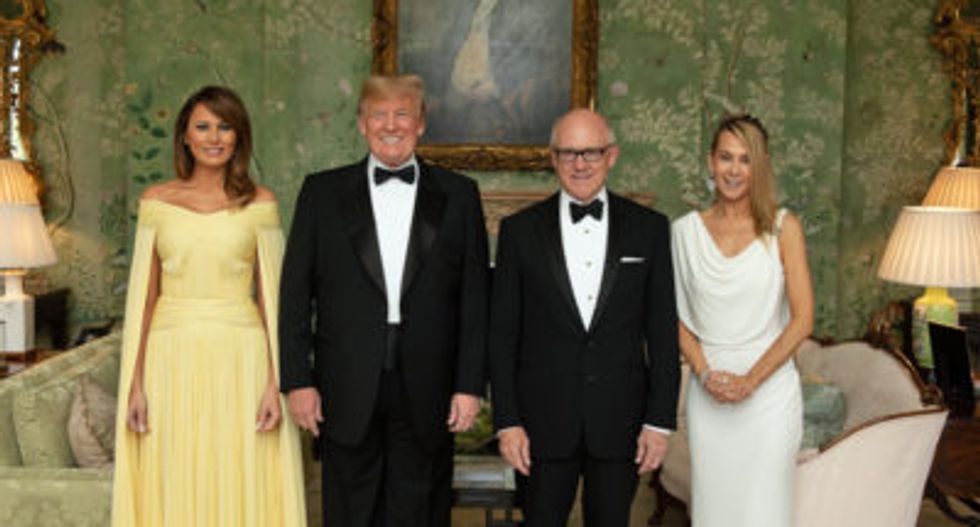 President's Donald Trump's Ambassador to the United Kingdom has worried diplomats for a pattern of "poor judgment" according to a bombshell report by The New York Times.

"Playing host at a small dinner on Tuesday night in honor of Secretary of State Mike Pompeo, the American ambassador to Britain, Robert Wood Johnson IV, told his guests that the wine was from President Trump’s vineyard in Virginia. He was serving it, he joked, even though it might be ethically improper," the newspaper reported. "The next day, Mr. Johnson was not making any more jokes about ethics. On Twitter, he insisted he had “followed the ethical rules and requirements of my office at all times” after The New York Times reported that at the president’s request, he had raised with a British official the idea of steering the British Open golf tournament to Mr. Trump’s Turnberry golf resort in Scotland."

"In the ranks of the American diplomatic corps, Mr. Johnson’s enthusiasm for pleasing Mr. Trump has raised questions about whether Mr. Johnson — a 73-year-old pharmaceutical heir, N.F.L. team owner and longtime friend of the president’s — has put promoting his boss over his diplomatic duties," The Times reported. "It has also deepened the misgivings of the London embassy’s staff about his judgment, given his reputation for off-color jokes and remarks to subordinates that some said have crossed the line into sexism or racism. His behavior has eroded morale among career diplomats and has surfaced in a State Department inspector general’s look at the embassy, the results of which are in a report filed in February but not yet released."

The newspaper interviewed Lewis A. Lukens, who had served as Johnson's deputy.

“Instances like this reinforce the image of an ambassador out of touch with government ethics requirements and more interested in serving the president’s personal interests than representing the country overseas," he explained.

The newspaper also detailed how "Johnson regularly made his female and Black staff members uncomfortable with comments about their appearances or race."