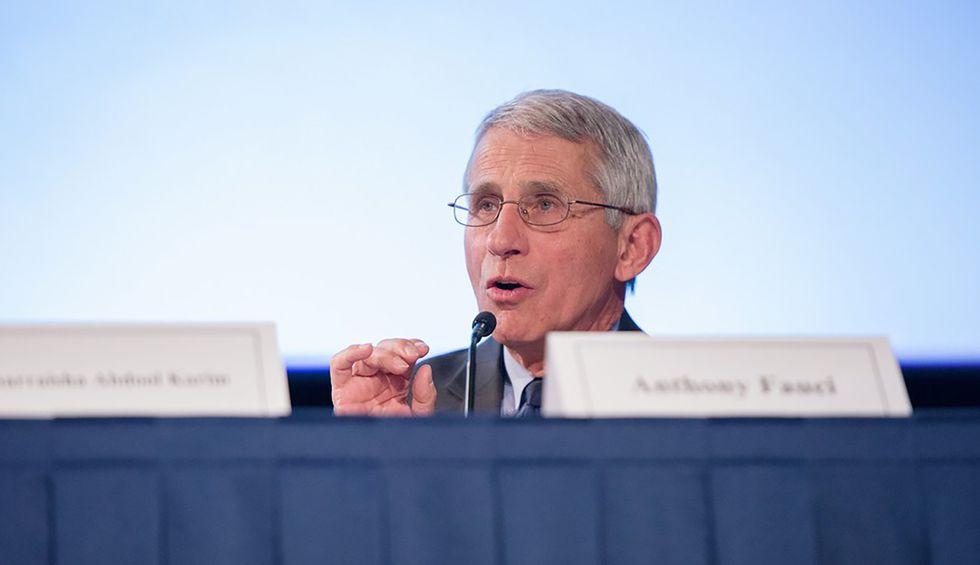 Fogarty held its 50th anniversary symposium, "What are the new frontiers in global health research?" on May 1, 2018, at NIH in Bethesda, Maryland. The tools exist to bring the end of HIV/AIDS but implementation must be improved, said National Institute of Allergy and Infectious Diseases Director Dr. Anthony S. Fauci.
Alex Henderson
July 14, 2020The Right Wing

President Donald Trump has insisted that his White House team is not trying to undermine Dr. Anthony Fauci, who is still part of the president’s coronavirus task force. But long-time Trump aide Dan Scavino, according to Business Insider’s Eliza Relman, posted an anti-Fauci cartoon on his Facebook page on Monday night.

Relman reports: “The post features an image of Fauci, the nation's top infectious disease expert who’s helping lead the federal government's coronavirus response, with a faucet coming out of his nose. The drawing shows Fauci's faucet drowning the U.S. economy with orders of, ‘Schools stay closed this fall!,’ ‘Indefinite lockdown!’, and ‘Shut up and obey!’ in a cascade of ‘extra cold’ water.”

Kentucky Sen. Rand Paul, who has been highly critical of Fauci, is depicted in the cartoon saying of the expert immunologist, “Shut him off!”

Next to the cartoon, Scavino posted: “Sorry, Dr. Faucet! At least you know if I’m going to disagree with a colleague, such as yourself, it’s done publicly — and not cowardly, behind journalists with leaks. See you tomorrow!”

At a press briefing on Monday, White House Press Secretary Kayleigh McEnany claimed that the Trump White House was not trying to undermine Fauci and did not produce any “opposition research” against him.

“Why is the White House trashing Dr. Fauci?" CNN’s Jim Acosta asked McEnany. "The president has gone off on anonymous sources in the past. Why not have the guts to trash Dr. Fauci with your own names?”

“Dr. Fauci and the president have always had a very good working relationship," McEnany responded.

Trump and Fauci have had major differences of opinion recently. While Trump is encouraging businesses and schools to reopen sooner rather than later, the 79-year-old Fauci has stressed that they shouldn’t reopen until it is safe to do so. And Fauci said that he hasn’t met with Trump since June 2.