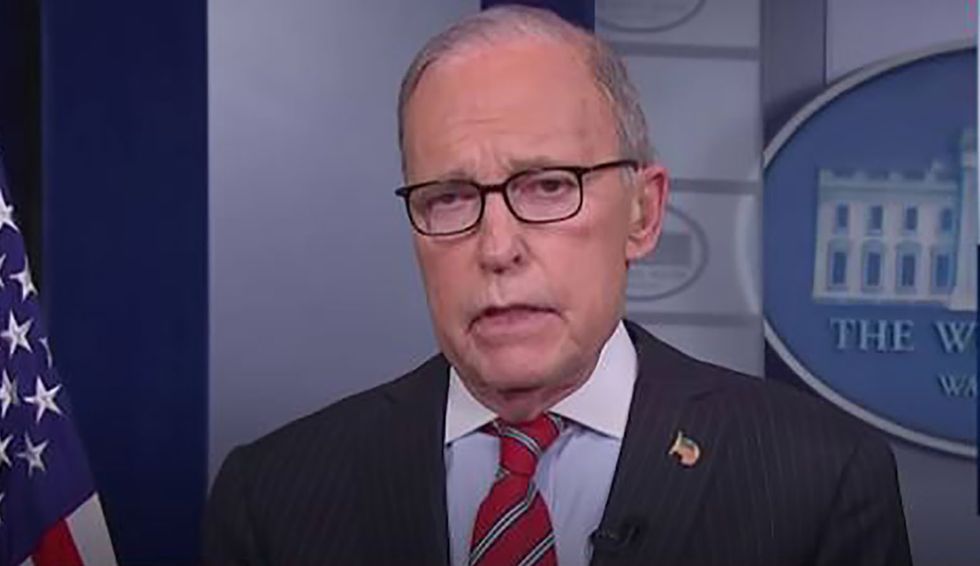 On Wednesday morning, Republicans are in the second day of a full-on blitz attempting to sell the idea that hydroxychloroquine is effective as a treatment against COVID-19. That effort comes in the form of not just statements from Donald Trump, but supporting tweets and emails from Republican candidates and a full-court press from Fox News. At first, the idea that the GOP is latching onto claims from a doctor who believes medicines come from alien DNA to justify renewed support for a drug proven ineffective months ago seems baffling. Even if everyone from Ron DeSantis to Peter Navarro has joined in buying hundreds of millions of pointless doses, and they have, the billions wasted on the drug hardly seem to justify a second round of life-threatening propaganda.

But the hydroxychloroquine story isn’t about whether or not the drug is effective—and to be clear, it’s not. The reason Republicans are supporting this fresh round of out-and-out lies about a treatment that is more harmful than helpful isn’t because they’re getting rich off the pills. It’s because they really, really need to convince people that it’s safe to go back to work and send their kids back to school. Because hydroxychloroquine, schools reopening, and the GOP “plan” for COVID-19 are all a single story. It’s the story of Republicans needing working class people to go out there and generate money—for the wealthy.

On Monday, Republicans finally produced a draft of their take on the next round of addressing COVID-19—a round that, though a third the size of what’s needed at this point, is still much larger than the entire economic stimulus program that Barack Obama fought for and signed in 2009. The Republican plan not only cuts unemployment compensation for those unable to work because of the pandemic, it sweeps in $30 billion for critical pandemic items like more F-35 fighters and a new FBI building. It took that kind of “sweetening” to get enough Republicans to agree to having any plan at all.

But there are two things that Republicans were dead set on getting into their package. Two things that Sen.  Mitch McConnell and others made clear were absolutely a requirement before the Senate would lift a finger. The Republican plan had to:

These were not a secret agenda. These were McConnell’s openly stated goals. He has been pushing for weeks the idea that, unless corporations are given a free pass to get as many workers sick as they like, America would be “swamped by personal injury lawsuits,” just because people had been personally injured. Republicans aren’t hiding this. Their entire agenda when it comes to COVID-19 is making sure that people have no choice but to get out there and put their lives on the line for minimum wage. Trump even used an executive order to put mostly immigrant workers back onto the lines at meatpacking facilities even as people at those facilities were literally dying.

And that’s exactly why Republicans are also keen on reopening schools. Those complaining about people not being eager to work for minimum wage in the midst of a pandemic and those calling for the reopening of public schools are after the same thing: Maintaining a low-cost “service class” that does the actual work while the wealthy and corporations collect the benefit of their labor. It’s not anything new. It’s actually baked into the unfettered capitalism of the American system. The COVID-19 crisis only serves to underline the utter cruelty and inhumanity intrinsic to that system.

The public school funding system in the United States—where almost all the cost falls on property tax in local communities—is one of the best tools the wealthy have ever created to externalize costs and ensure the continued presence of a low-cost worker class. The result of the current system of school funding is that poor communities end up paying a much higher tax rate, while still getting schools that provide inadequate opportunities for their children, helping to lock in a poverty cycle. This is by no means an accident.

Across the nation, private schools are not opening. Barron Trump’s school is not opening. But Republicans want public schools open for the same reason they want unemployment benefits ended: the working class is the engine that puts more money in wealthy pockets. Reopening public schools in the midst of a pandemic has nothing to do with educating the nation’s children. It has everything to do with removing obstacles that keep the cogs from getting back out there and turning the wheels of commerce.

Cutting unemployment and opening schools is entirely designed to give American workers absolutely no choice but to put their lives on the line without making a single demand on their employers. That’s what Republicans are saying every time they complain about the chance that someone might possibly be able to survive for another month on unemployment benefits. Other nations are absolutely providing workers with enhanced benefits during the pandemic because “paying people to stay home” is good public policy. It’s impossible to have effective social distancing if workers are being put in a position where they cannot stay home, and cannot disobey directives from their employers, even if those directives are unsafe.

Hydroxychloroquine is just the carrot being dangled in front of workers as they’re forced back on the job, and their children are forced back into school without an option. It’s the promise that if they do get sick, there’s something that can be done about it. Unfortunately, it’s also an absolute lie.