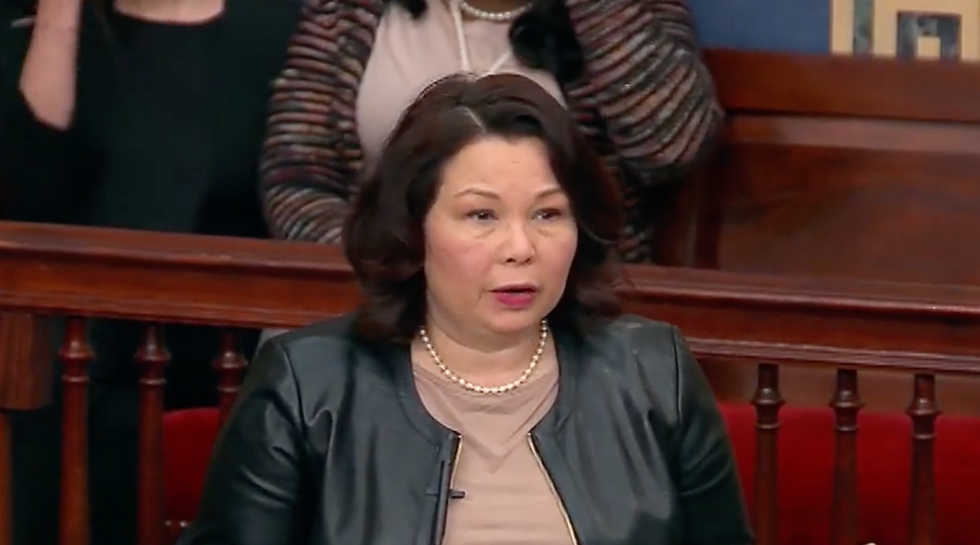 Fox News’ Tucker Carlson has drawn fire for his recent attacks on Sen. Tammy Duckworth, describing her as a “coward,” “fraud” and “callous hack” who is guilty of “hating America” — despite the fact that the Illinois senator suffered two leg amputations while serving in the Iraq War in 2004. The 52-year-old Duckworth fires back at Carlson in an op-ed for the New York Times, stressing that she would gladly serve in the military again.

“Even knowing how my tour in Iraq would turn out, even knowing that I’d lose both my legs in a battlefield just north of Baghdad in late 2004, I would do it all over again,” Duckworth asserts. “Because if there’s anything that my ancestors’ service taught me, it’s the importance of protecting our founding values, including every American’s right to speak out.”

The senator goes on to write that her criticisms of President Donald Trump and his policies doesn’t make her any less patriotic than she was when she decided to enlist in the U.S. Army in 1992.

Carlson, Duckworth writes, took her recent comments about President George Washington out of context. The senator asserted that protesters who believe that statues of the United States’ first president should be removed from public places have a right to express that view, but it isn’t a view that she shares.

“Setting aside the fact that the right wing’s right to lie about me is one of the rights I fought to defend, let me be clear: I don’t want George Washington’s statue to be pulled down any more than I want the Purple Heart that he established to be ripped off my chest,” Duckworth writes. “I never said that I did. But while I would risk my own safety to protect a statue of his from harm, I’ll fight to my last breath to defend every American’s freedom to have his or her own opinion about Washington’s flawed history. What some on the other side don’t seem to understand is that we can honor our founders while acknowledging their serious faults, including the undeniable fact that many of them enslaved Black Americans.”

Duckworth goes on to say that by attacking her, Trump is trying to distract voters from his failures as president.

“It’s better for Mr. Trump to have you focused on whether an Asian-American woman is sufficiently American than to have you mourning the 130,000 Americans killed by a virus he claimed would disappear in February,” Duckworth asserts. “It’s better for his campaign to distract Americans with whether a combat veteran is sufficiently patriotic than for people to recall that this failed commander in chief has still apparently done nothing about reports of Russia putting bounties on the heads of American troops in Afghanistan.”

It should be noted that Fox News has a major double standard when it comes to comments about military veterans who suffered disabilities. Fox is where Sean Hannity and others expressed fake outrage because comedian Pete Davidson of “Saturday Night Live,” in 2018, told a joke making fun of the appearance of Republican Texas Rep. Dan Crenshaw — a military veteran who wore an eye patch after losing one of his eyes in combat. Davidson joked that Crenshaw resembled “a hit man in a porno movie,” inspiring Hannity to rant that Davidson and others at “SNL” can “go to hell.” But Davidson never attacked Crenshaw’s character or questioned his patriotism — it was a goofy joke that he later apologized for. When Carlson attacked another veteran seriously injured in wartime, Duckworth, and said hateful things about her, he got a pass from his colleagues at Fox News.

In her op-ed, Duckworth asserts that “self-serving, insecure men” like Trump and Carlson “can’t tell the difference between true patriotism and hateful nationalism” and equates them with “cynical bullies who use schoolyard tactics to distract from their own shortcomings.”

“While I would put on my old uniform and go to war all over again to protect the right of Tucker Carlson and Donald Trump to say offensive things on TV and Twitter,” Duckworth writes, “I will also spend every moment I can from now until November fighting to elect leaders who would rather do good for their country than do well for themselves.”