Rep. John Lewis in final message: 'In the last days and hours of my life you inspired me' 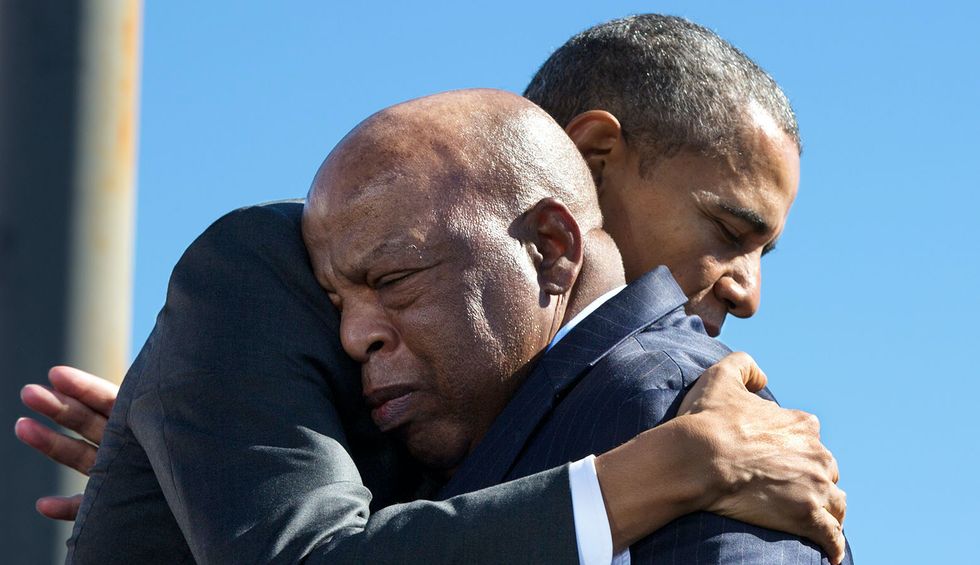 President Barack Obama hugs Rep. John Lewis, D-Ga. after his introduction during the event to commemorate the 50th Anniversary of Bloody Sunday and the Selma to Montgomery civil rights marches, at the Edmund Pettus Bridge in Selma, Ala., March 7, 2015. (Official White House Photo by Pete Souza) This official White House photograph is being made available only for publication by news organizations and/or for personal use printing by the subject(s) of the photograph. The photograph may not be manipulated in any way and may not be used in commercial or political materials, advertisements, emails, products, promotions that in any way suggests approval or endorsement of the President, the First Family, or the White House.
Laura Clawson
and
Daily Kos
July 30, 2020

The coronavirus pandemic prevented Rep. John Lewis from having the big public funeral someone of his stature might ordinarily get, a national occasion for mourning together. But as Lewis is laid to rest on Thursday at 11 AM ET, you can stream the service on CBSN, and he left us with some final words, to be printed in The New York Times on the day of his funeral.

“While my time here has now come to an end,” Lewis wrote, “I want you to know that in the last days and hours of my life you inspired me. You filled me with hope about the next chapter of the great American story when you used your power to make a difference in our society. Millions of people motivated simply by human compassion laid down the burdens of division. Around the country and the world you set aside race, class, age, language and nationality to demand respect for human dignity.”

Lewis went on to link the racist oppression of his childhood to events today, writing that “Emmett Till was my George Floyd. He was my Rayshard Brooks, Sandra Bland and Breonna Taylor.” He urged people to continue getting in the “good trouble, necessary trouble” he had so long championed, but not to forget that “The vote is the most powerful nonviolent change agent you have in a democratic society. You must use it because it is not guaranteed. You can lose it.”

”When historians pick up their pens to write the story of the 21st century,” Lewis closed, “let them say that it was your generation who laid down the heavy burdens of hate at last and that peace finally triumphed over violence, aggression and war. So I say to you, walk with the wind, brothers and sisters, and let the spirit of peace and the power of everlasting love be your guide.”

Although Lewis’ funeral will be a small, invitation-only event at Ebenezer Baptist Church in Atlanta, former Presidents Barack Obama, Bill Clinton, and George W. Bush will all be in attendance. Obama is expected to eulogize Lewis, while Clinton and Bush will participate in the service. Donald Trump, of course, did not travel from the White House to the Capitol to pay his respects as Lewis lay in state there.