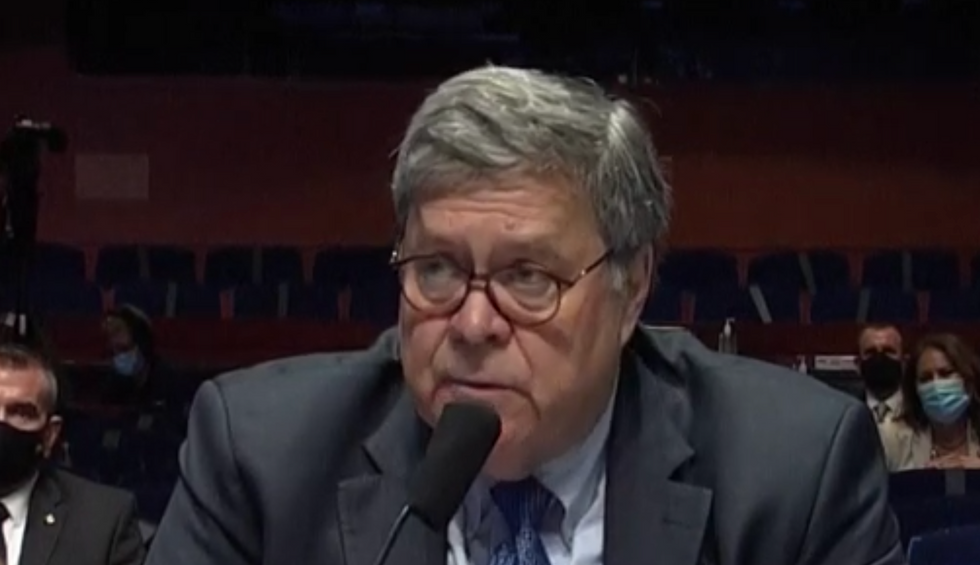 Attorney General Bill Barr finally showed up for his long-scheduled hearing before the House Judiciary Committee and once again proved himself to be Trump's eager henchman. He didn't read aloud some of the more incendiary parts of his opening statement (which as Rep. Hank Johnson, D-Ga., observed, "reads like it was written by Alex Jones or Roger Stone") but for all his braying about "the law" his arrogant attitude and slippery answers left no doubt about where his allegiance lies. Let's just say Trump doesn't have to worry about Barr's loyalty.

The list of Barr's odious comments is a mile long, starting with his fatuous answers regarding the question of systemic racism in policing. He evidently thinks it's cute, just as his boss does, to insist that "more white people are shot by police than Black people" when responding to the question of why Black people, who make up only 13 percent of the U.S. population, account for 25 percent of those shot and killed by police since 2015 while "non-Hispanic" whites, who are more than 60 percent of the population, only account for 45 percent. This answer is insulting to the intelligence of the American people.

Barr also obfuscated, dissembled, misled and evaded questions about his interference in cases on behalf of Trump's cronies, the firing and reassigning of U.S. attorneys working on cases involving the president, the shocking events at Lafayette Square in June and his inconsistency in applying federal laws to benefit the president, while ignoring them when they don't. As hard as it is to believe, he even took it upon himself to strenuously defend the president's botched COVID-19 response in great detail, something he could have easily avoided by saying it isn't his purview.

But no, Barr had the temerity to use some of Trump's most spectacularly absurd excuses by blaming the Obama administration, which hasn't been in office for three and a half years, for allegedly destroying the CDC and failing to replenish the national stockpile of PPE. If there was one moment that captured Barr's total immersion in Trump's ocean of self-deception and lies, it was that series of inane talking points.

There is a whole lot to worry about with what Barr is doing right now, not the least of which is covering up Trump's corruption and pushing paramilitary responses against peaceful protests. But after listening to his testimony, I think it's the potential for direct interference in the presidential election by Barr and the Justice Department that should have every American on high alert.

Consider that Barr's opening statement referred to the Russia investigation as "bogus," ignoring the fact that, among other things, Robert Mueller and multiple House and Senate committees have established that Russia interfered in the 2016 election on behalf of Donald Trump. This would also indicate that Barr is completely unconcerned about another propaganda or hacking campaign happening as we speak, despite repeated warnings from the FBI the U.S. intelligence agencies and Congress.

That just isn't something the attorney general of the United States cares about. When asked if it was OK to solicit or accept foreign assistance in an election campaign, he even responded, Indeed, he even went so far as to answer, "It depends what kind of assistance." He caught himself, so when he was asked the same question again he said, "No." It's a felony, after all. But I think it's pretty clear that he believes when Trump asks for assistance from Russia, Ukraine and China — all of which we've seen him do publicly — it is just fine.

On the other hand, Barr has invented out of whole cloth a new concern that hostile governments will alter the election results by "manufacturing mail-in ballots," citing zero actual evidence but rather his "common sense" as proof. That's because there is no evidence. Many states provide no-excuse absentee ballots and five states have total vote by mail. Oregon, for instance, has done it since 1998, without any hint of such a problem.

Earlier in the hearing, Barr had made it clear that he sent federal troops into Portland because protesters were harming a federal building. When asked why he had backed the right of armed protesters who stormed the Michigan state capitol, some of whom threatened the governor with lynching and beheading, he claimed not to have been aware of that and mumbled something about defending religious freedom. He indicated that he's only concerned with federal offenses.

Rep. Greg Stanton, D-Ariz., pointed out that Trump has suggested that no ballots should be counted after Election Day and asked Barr, "If the president asks you to intervene and try to stop states from counting legal ballots after Election Day, will you do the right thing and refuse?"

Barr responded, "I will follow the law." He separately said he would "enforce" the law. So that means if a state has issued a ruling saying that votes cannot be counted if they were postmarked before Election Day but didn't arrive until after that, he would be willing to intervene on behalf of the president to ensure those votes weren't counted.

Anyone who lived through the Florida 2000 election debacle should know that this is not a matter for federal law enforcement. Elections are run by the states. If there's a dispute it goes to the courts and in a worst-case scenario to the Congress. Barr has no authority to intervene at all in how states count and tabulate their votes, but judging from his recent behavior, I doubt that would stop him. With Barr, "follow the law," seems to mean "do whatever benefits Donald Trump and hurts his enemies."

When Judiciary Chairman Jerry Nadler, D-N.Y., asked Barr whether he had discussed the presidential campaign with Trump, the attorney general said he couldn't talk about his private conversations but blithely admitted that they talk about the campaign in Cabinet meetings and said nobody should be surprised that the election comes up. Actually, they should be both surprised and alarmed. The AG is supposed to be the most removed from politics of all high-level administration officials and neither the president nor anyone else should not be talking to him about the campaign or the election. (You may recall the furious rending of garments on the right when Attorney General Loretta Lynch met with Bill Clinton for 15 minutes in 2016.)

Perhaps most chilling was Barr's answer to Rep. Hakeem Jeffries, D-N.Y., who asked whether Barr himself would leave office on Jan. 20, 2021, if Trump loses the election but tries to remain in the White House. "Well, if the results are clear, I would leave office," the attorney general said. He did not elaborate further, but considering that the president is already saying that mail-in voting will somehow "rig" the election, something Barr claims to believe is thoroughly possible, his unwillingness to simply say that he would leave office if Trump loses is more than a little bit disturbing.

When Nadler asked Barr whether he had ever discussed the presidential campaign with Trump he also asked whether they had discussed the "current or future deployment of federal law enforcement" within the context of Trump's re-election campaign. Barr answered, "I'm not going to get into my discussions with the president."

It would have been completely acceptable for him to simply say no to such an explosive suggestion. You have to wonder why he didn't.