'Making the court jester the king': Why Donald Trump truly is 'the world's most dangerous man' 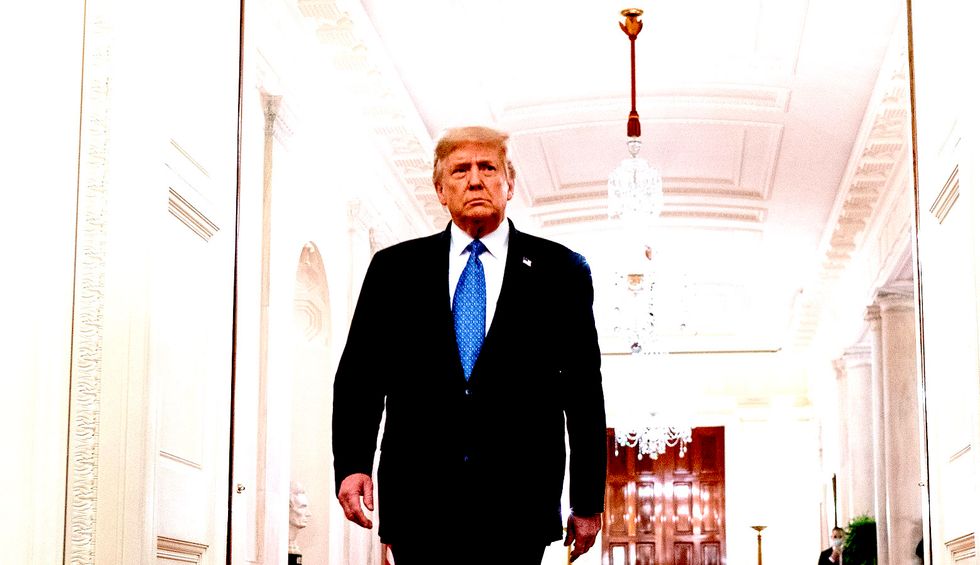 Watching the news from Portland, Oregon, where night after night anonymous Federal forces in combat gear and camouflage continued to go after protesters with tear gas, flashbangs, rubber bullets and batons, doing their damnedest to make a tough situation worse, I was again reminded of a simple fact. It will come as a shock to no one other than the most credulous:

Professionally and socially, I know people who have written reality programming, who have produced it, who have edited it. The reality is a fantasy. Yes, real people are the characters but plotlines are formatted to fit the agreed-upon story, all the boring parts are edited out, events are juggled around to present characters in the most entertaining light, for good or evil.

Ultimate case in point: Donald Trump became a reality TV star—and president—by pretending to be something he is not, a self-made decisive billionaire with more business acumen than Andrew Carnegie, Henry Ford, Thomas Edison, and Warren Buffett combined.

Instead, reading his niece Mary L. Trump’s heartbreaking new memoir, Too Much and Never Enough, he’s revealed as a man filled with fear and insecurity who from childhood has lashed out with cruelty and prevarication at the least challenge and whose boasts of financial empire were built on the million and millions given to him by his father and a web of fraud, tax evasion, and bankruptcy that one day finally will be exposed for all to see.

“Honest work was never demanded of him,” Mary Trump writes, “and no matter how badly he failed, he was rewarded in ways that are almost unfathomable. He continues to be protected from his own disasters in the White House, where a claque of loyalists applauds his every pronouncement or covers up his possible criminal negligence by normalizing it to the point that we’ve become almost numb to the accumulating transgressions. But now the stakes are far higher than they’ve ever been before; they are literally life or death. Unlike any previous time in his life, Donald’s failings cannot be hidden or ignored because they threaten us all.”

Mark Burnett, executive producer of The Apprentice, molded a willing Trump into a realty TV monster from the Planet Television, the place where nothing “real” is real. As per Mary Trump, when the show began in 2004, “Donald’s finances were a mess… and his own ‘empire’ consisted of increasingly desperate branding opportunities such as Trump Steaks, Trump Vodka and Trump University… The Apprentice… despite all evidence to the contrary, presented him as a legitimately successful tycoon.”

An editor on the show said, “Most of us knew he was a fake. He had just gone through I don’t know how many bankruptcies. But we made him out to be the most important person in the world. It was like making the court jester the king.”

We know from other reporting that the editors often had to “reverse engineer” episodes of the series when Trump impulsively changed his mind in the middle of shooting and a scramble ensued to undo the damage. Katherine Walker, one of the producers, told Patrick Radden Keefe of The New Yorker, in a 2018 profile of Burnett, that they often “struggled to make Trump seem coherent, editing out garbled syntax and malapropisms. ‘We cleaned it up so that he was his best self,’ she said, adding, ‘I’m sure Donald thinks that he was never edited.’

However, she acknowledged, he was a natural for the medium: whereas reality-TV producers generally must amp up personalities and events, to accentuate conflict and conjure intrigue, “we didn’t have to change him—he gave us stuff to work with.”

I’ll bet. His profane gift for manipulation and dissembling was further nurtured and encouraged at The Apprentice and now the nation and world suffer. Lashing out, in fear of losing reelection, he’s used the lessons he learned from reality TV to mean and violent effect in Portland.

“Welcome to the world of performative authoritarianism,” The Atlantic’s estimable Anne Applebaum writes, “a form of politics that reached new heights of sophistication in Russia over the past decade and has now arrived in the United States. Unlike 20th-century authoritarianism, this 21st-century, postmodern influence campaign does not require the creation of a total police state. Nor does it require complete control of information, or mass arrests. It can be carried out, instead, with a few media outlets and a few carefully targeted arrests…

On Fox News, Sean Hannity has already denounced Portland as a “war zone.” Tucker Carlson has spoken of protesters as “mobs” who keep liberal Democrats in power. The next stage will implicate Joe Biden in this same story: The president’s aides have told journalists that Biden, if he wins, will “allow left-wing fascists to destroy America.” Protesters, mobs, chaos, fascists, the left, the “Dems,” Biden—they’re all one narrative. The Trump administration will show people pictures of its uniformed troops pushing back against them, restoring order with a strong hand. And it will use the kind of language that appeals to that part of the population that prizes safety over all else.

This all is meant as talking points for right-wing TV and radio and for Trump’s campaign ads, and as a diversion from 150,000 COVID deaths (although it also may be a dress rehearsal for election trouble in November). Some say he’s trying to scare suburban voters leaning toward Biden as Richard Nixon did in 1968 following urban uprisings after the assassination of Martin Luther King, Jr. and the police riot in Chicago at the Democratic National Convention. Others, including Amy Walter of The Cook Report and the PBS NewsHour, think it’s more about stiffening the spine of his faltering base.

She notes a Kaiser Family Foundation poll that that from May to July, Trump job approval among Republicans has dropped across the board: down 12 points on job approval, ten on the economy and a “whopping” 26 points on coronavirus. Walters tweets, “Is getting his base back enough for him to win the race? Probably not. He’s got to win back independents who’ve also soured on him. BUT, it sure would help GOP SEN candidates in IA, KS and Montana to have R voters come home.”

So now the Trump administration has agreed to begin withdrawing the Feds from Portland on Thursday if state and local law enforcement secure Federal buildings and assuming conditions “significantly improve”—this despite Trump’s claim Thursday morning, “We’re not leaving until they’ve secured their city.”

Regardless, he knows he already has the footage he needs to for what he thinks will help him most. A handful of protesters late at night made noise and trouble with lasers, bottles and fire in a small area around the courthouse even though the vastest majority of ongoing demonstrations in Portland have been peaceful, as moms, dads and veterans march in support of Black Lives Matter and against the Federal presence on Portland’s streets.

On Trump’s behalf, Attorney General Barr and acting Department of Homeland Security Chad Wolf will keep haranguing the aforementioned credulous (unfortunately, they have a lot of votes) with bogus claims that the placid streets of Portland were overrun with anarchists—or denying there’s systemic racism among the police. The Federal dollars spent on military gear and personnel for use against American civilians should instead be going to cures for an ailing populace and an economy crippled by virus in which millions are devastated by poverty and a lack of food, housing and education.

“Perhaps most crucially, for Donald, there is no value in empathy, no tangible upside to caring for other people,” Mary Trump observes in Too Much and Never Enough. “… This is another crisis in which it would have been so easy for Donald to triumph, but his ignorance overwhelms his ability to turn to his advantage the third national catastrophe to occur on his watch. An effective response would have entailed a call for unity, but Donald requires division. It is the only way he knows how to survive.”

That’s the reality. There’s many a good reason her book is subtitled “How My Family Created the World’s Most Dangerous Man.”