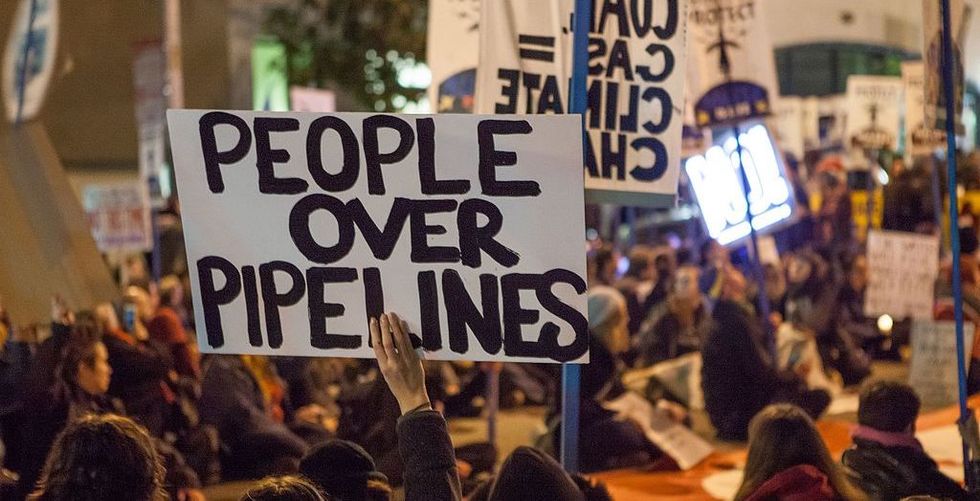 A federal judge has ruled that the controversial Dakota Access Pipeline needs to be emptied, most likely for at least a year, until the Army Corps of Engineers has successfully fulfilled its duty to produce an Environmental Impact Statement.

In a decision posted on Monday, U.S. District Judge James Boasberg argued that, despite the disruption that would be caused by a forcible shutdown of the pipe, that action is necessary due both to legal precedent and "the seriousness of the [Army] Corps' deficiencies" in not producing an Environmental Impact Statement even though there was a legal requirement to produce one. Boasberg found those two factors sufficiently compelling that they outweigh "the negative effects of halting the oil flow for the thirteen months that the Corps believes the creation of an [Environmental Impact Statement] will take."

The pipeline in question has been opposed by members of the Standing Rock Sioux Tribe, which has a reservation that lies downstream of the pipeline. The pipeline stretches from North Dakota to Illinois and moves the equivalent of 570,000 barrels of oil every day. Since its announcement, protesters and activists fought to stop construction of the pipeline, with thousands camping near the pipeline.

Earthjustice attorney Jan Hasselman, who represents the tribe, said in his own statement that "it took four long years, but today justice has been served at Standing Rock. If the events of 2020 have taught us anything, it's that health and justice must be prioritized early on in any decision-making process if we want to avoid a crisis later on."

In March, Judge Boasberg argued that the Corps had made a "highly controversial" decision when it approved federal permits for the pipeline even though there were serious environmental concerns. Boasberg waved off the idea that these concerns might be par for the course for a construction project of the pipeline's magnitude, noting that "there is considerably more than a few isolated comments raising insubstantial concerns." He argued that "too many questions remain unanswered" and that there were unrebutted concerns "regarding leak-detection systems, operator safety records, adverse conditions, and worst-case discharge" and said that an Environmental Impact Statement would be necessary for the pipeline to comply with the law.

Shortly after taking office, President Donald Trump signed executive orders that revived both the Dakota Access pipeline project and the Keystone XL pipeline project. The projects had been halted by President Barack Obama due to concerns that they could exacerbate man-made climate change and were long opposed by the Standing Rock Sioux Tribe on whose land they encroach.

Many states have passed laws, or are considering passing laws, that would make it more difficult for protesters to engage in acts of civil disobedience against pipeline construction. Hostility toward the protests was highlighted in 2016 when law enforcement blasted protesters with water cannons.