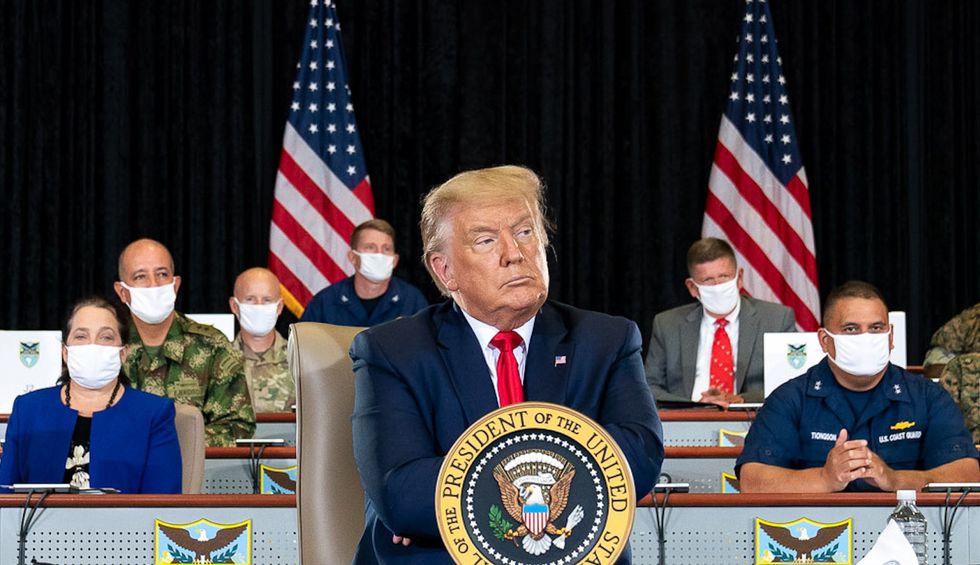 Let's talk about a scenario that's wildly unrealistic because of the Democratic Party's institutional culture but would probably come to pass if the GOP held the House of Representatives and a Democratic president's negligence led to over 100,000 avoidable deaths.

In normal circumstances, it would in fact be political suicide to impeach a president for a second time just 100 or so days before an election. Anyone who proposed it would be admonished that they must beat that president at the ballot box, and that the opportunity to do so will be before us in short order. But in present circumstances, there is an incredibly powerful counter-argument: If we do not get competent leadership, tens of thousands more will almost certainly die lonely, unpleasant deaths during both the lead-up to the election and the 15 weeks between Election Day and the the inauguration of Joe Biden if he wins in November.

In mid-April, the University of Washington's oft-cited Covid-19 model projected 62,000 US fatalities from the pandemic through August 4. At the end of that month, they revised their projection up to 73,000, then to 134,000 in early May. We are still weeks away from that date, have already suffered 140,000 deaths and they recently revised their projection up to 225,000 deaths by Election day. (They also project that we could avoid 45,500 of those fatalities if Trump hadn't helped make masks a dopey front in the culture wars and everyone wore one for the next three-and-a-half months.)

Senate Republicans, you'll recall, didn't really try to defend Trump's clumsy attempts to strong-arm Ukraine into assisting him in his re-election campaign. The either babbled about the Deep State or said that what he had done was wrong but didn't rise to the level of impeachment. This would be a prosecution for a very different kind of crime. This time, there are bodies--so many that in their worst days, cities have needed refrigerated trucks to hold them all.

This time, they would be forced to defend Trump spending vital weeks calling Covid-19 a Democratic hoax that was no worse than the flu. They'd have to explain the regime sending tons of PPE to other countries and then confiscating the equipment states and private hospitals acquired on their own. They'd have to defend his constant bragging about shutting down travel from Asia and Europe when he never actually did those things. They'd have to defend his blather about the outbreak going away on its own, his claim that he had slowed down testing because it produces more cases or his obsession with unproven medications and speculation about ridding the body of the virus with bleach injections.

Trump is abandoning even the pretense of managing this crisis, according to The Washington Post. An adviser told the paper that he “is not really working this anymore. He doesn’t want to be distracted by it. He’s not calling and asking about data. He’s not worried about cases.” It's hard to say precisely where the line between awful governance and criminal negligence falls, but clearly we blew past it over 100,000 deaths back. Democrats could make Senate Republicans defend that crime in a remote impeachment, via Zoom, because it's too dangerous for them to return to Washington. And who knows, maybe we could save another 100,000 lives in the process.

If the partisan roles were reversed, this would be exactly what we would see happen in the coming months.

The Associated Press reports that "a new plan from Senate Republicans to award businesses, schools, and universities sweeping exemptions from lawsuits arising from inadequate coronavirus safeguards is putting Republicans and Democrats at loggerheads as Congress reconvenes next week to negotiate another relief package."

According to NBC, "Donald Trump on Friday continued muddying his administration's messaging on the use of masks to combat the spread of the coronavirus, saying he disagreed with his CDC director about how effective they would be in stopping COVID-19 and that masks 'cause problems too.'" (A small number of people do have medical conditions that make masks problematic but according to a mountain of scientific evidence, this is, broadly speaking, a lie.)

And ProPublica reports that hospitals are facing a shortage of doctors in part because the Trump regime put "their visas... on hold indefinitely."

A proclamation issued by President Donald Trump on June 22, barring the entry of most immigrants on work visas, came right as hospitals were expecting a new class of medical residents. Hundreds of young doctors were unable to start their residencies on time.

The co-director of President Trump’s Operation Warp Speed can maintain extensive investments in the drug industry and avoid ethics disclosures while he continues to make decisions about government contracts for promising coronavirus vaccines under a decision this week by the Health and Human Services inspector general.

Monday’s ruling by the Office of Inspector General came in response to a complaint filed by the advocacy groups...[that] said the Trump administration has carved out an improper exception to federal conflict of interest rules for Moncef Slaoui, a venture capital executive and former high-ranking official at drug giant GlaxoSmithKline.

This regime is just a giant honeypot for corporate America.

"Steven Mnuchin suggested Friday that the government should consider forgiving all taxpayer-backed small loans under the federal Paycheck Protection Program without verifying how the funds were used, a decision that could wipe away debt for millions of small businesses but would also substantially increase the risk of fraud," reports the WaPo.

Recall that large companies got a lot of these "small business loans."

As unmarked feds snatch protesters off the streets in Portland, memo leaked to me shows they'll be deployed indefinitely and in undisclosed locations, with drones "on standby to assist as needed":https://t.co/dIrNSlbM6B pic.twitter.com/LR4COtuvGs

Deputy DHS head Ken Cuccinelli told NPR that they are expanding this seige to other cities.

In early March, "a federal judge ruled... that Ken Cuccinelli's appointment to a top immigration position in the Trump administration was unlawful."

So Trump is appointing Seb Gorka to a four-year term on the National Security Education Board. https://t.co/JwpU0u4LVE
— Jennifer Bendery (@Jennifer Bendery) 1594756997.0

Reuters reports that "Donald Trump is expected to soon issue an executive order that would ban undocumented immigrants from being included in the 2020 census count of every person living in the United States."

Reuters does not report that there's no way to exclude undocumented immigrants without asking people about their about citizenship status, which the regime lost a high-profile court case over last year. Also not mentioned in the report is that who gets counted in the Census is outlined in the Constitution.

Trump's trying to intimidate immigrant communities into not participating in the Census and this kind of reporting helps.

Finally, we'll leave you with something to worry about. Trump’s lies about voting by mail may lead to a victory among in-person votes on his way to a crushing loss weeks later, when all the absentee ballots are counted. In the interim, he will declare victory, fight tooth-and-nail to reject every absentee ballot and his cultists may commit scattered acts of terror. It’d be a nightmare.

And there's also the postal service itself to worry about.