'I was a victim of a mob': Missouri attorney defends pointing assault rifle at protesters 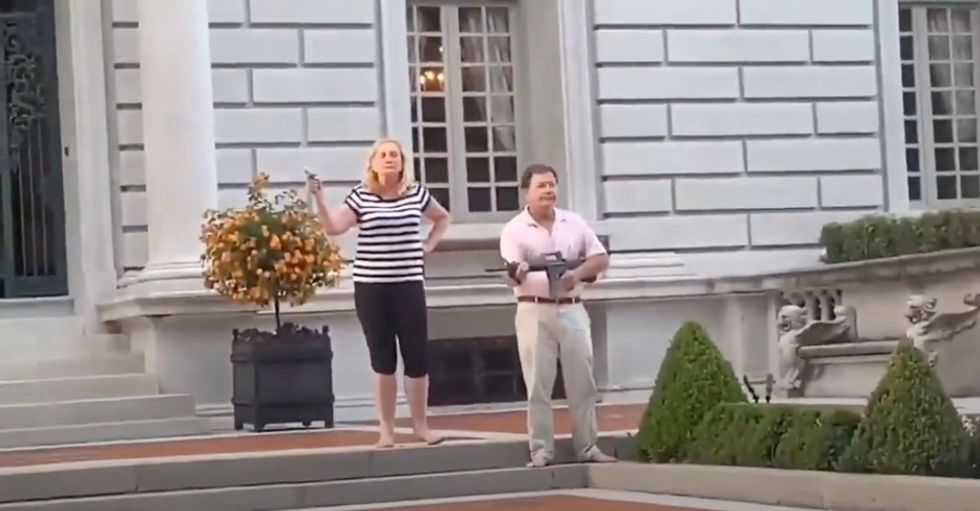 A wealthy white attorney shown in viral video pointing an assault rifle at protesters who stumbled upon his home en route to the St. Louis mayor’s home is claiming he felt “frightened” and “assaulted.” Relying heavily on stereotypes of Black people as violent criminals, Mark McCloskey sounded all kinds of racist dog whistles in his interview with CNN’s Chris Cuomo on Tuesday. McCloskey appeared with his attorney this time instead of his wife Patricia, who was also shown in video footage pointing a gun at protesters.

When Cuomo asked the personal injury attorney how he feels about becoming the "face of political resistance to the Black Lives Matter movement,” he dismissed the idea as “completely ridiculous.” "I'm not the face of anything opposing the Black Lives Matter movement. I was a person scared for my life who was protecting my wife, my home, my hearth, my livelihood," he said. "I was a victim of a mob that came through the gate.”

McCloskey continued his obvious attempt to paint himself as the victim amid a movement aimed at stopping white people like him from hunting down and killing Black people for doing little more than making their white counterparts feel uncomfortable.

"To give you context, on June 2nd, I watched the city burn. I watched the 7-11 get smashed in, looted and burned for 40 minutes on live television with nobody showing up to do anything,” he said. “I realized at that time, we're on our own, when bad things happen, they unpredictably turn really bad, really fast."

McCloskey is so dedicated to his victim narrative that it’s almost easy to forget that the people he targeted were attempting to hold St. Louis Mayor Lyda Krewson accountable for her stand against cutting the city's law enforcement budget following the death of an unarmed Black man. A Minneapolis police officer kneeled on George Floyd’s neck for more than eight minutes while the cop’s peers watched and even assisted at points in the arrest, but somehow McCloskey is arguing that the response to that inhumanity is the real tragedy.

When Cuomo gave McCloskey the opportunity to detail just how protesters harmed him or his property, he deflected repeatedly, failing to give any examples. "Mr. McCloskey, I don't mean to cut you off. But I'm saying that night, did anything happen to you, your family, or your property," Cuomo asked.

“Yeah, it's called social intimidation, it's called terrorism,” McCloskey responded. “Chris, what's the definition of terrorism? To use violence and intimidation to frighten the public, that's what happened to me. And that's the damage I suffered.” This is coming from the man shown holding the assault rifle.