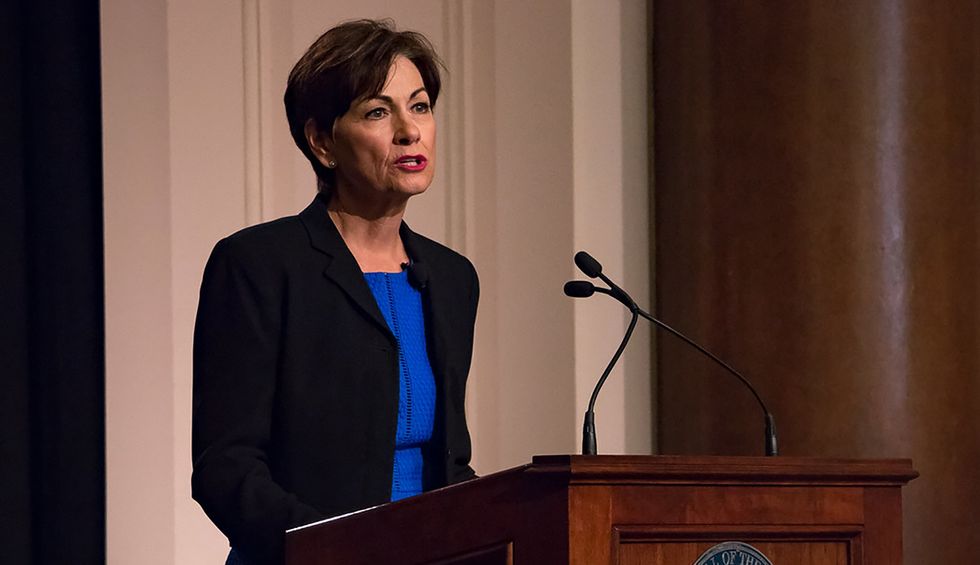 Hundreds of physicians in Iowa signed on to an open letter to Republican Gov. Kim Reynolds, urging her to mandate a public mask requirement as cases of the novel coronavirus continue to rise, as reported by The Gazette. The letter encourages the governor to mandate mask or other face coverings statewide and suggests that, as a bare minimum, masks should be required for adults and older children who can “medically tolerate” them when in “enclosed public spaces.” Reynolds has not yet issued a mask mandate for the entire state and instead directed Iowans to take personal responsibility on the subject.

The letter was sent to the governor on Wednesday and is available to be read on a website called A Prescription for Iowa. The letter refers to the worrisome COVID-19 surges in other states across the country, and argues that “more can be done through state public health policy to help prevent Iowa from suffering the same fate.”

Dr. Austin Baeth, the organizer of the group, stressed in a statement: “This is about using science to protect the lives of our patients, friends and family in Iowa. This is not about politics.”

It’s disturbing that a public health issue ever became partisan, but as evident in the recent Daily Kos/Civiqs polling data, mask-wearing does seem to fall across political lines. According to recent polling, 82% of Democrats say they wear face masks whenever they go out, while just over one-quarter of Republicans report the same. That said, a majority of polled American adults (54%) do believe that wearing a mask helps prevent the spread of the virus.

We know that physicians—as well as other healthcare professionals, including nurses, aides, janitors, cafeteria workers, and so on—have faced a lack of personal protective equipment (PPE). We also know that medical professionals have died after working on the front lines of the virus themselves; for example, Daily Kos just covered the death of an ICU physician in Baltimore, Maryland, who died after treating COVID-19 patients himself. Not long before that, a physician who delayed his retirement to help fight the virus at a Brooklyn, New York hospital, died after contracting the virus himself. Some medical professionals, like an ICU nurse in St. Petersburg, Florida, have quit, saying coworkers were getting sick and they lacked enough adequate PPE.

At this point, Iowa is one of the few states left without a public mask mandate. But in a public health crisis, consistency cannot be overstressed.