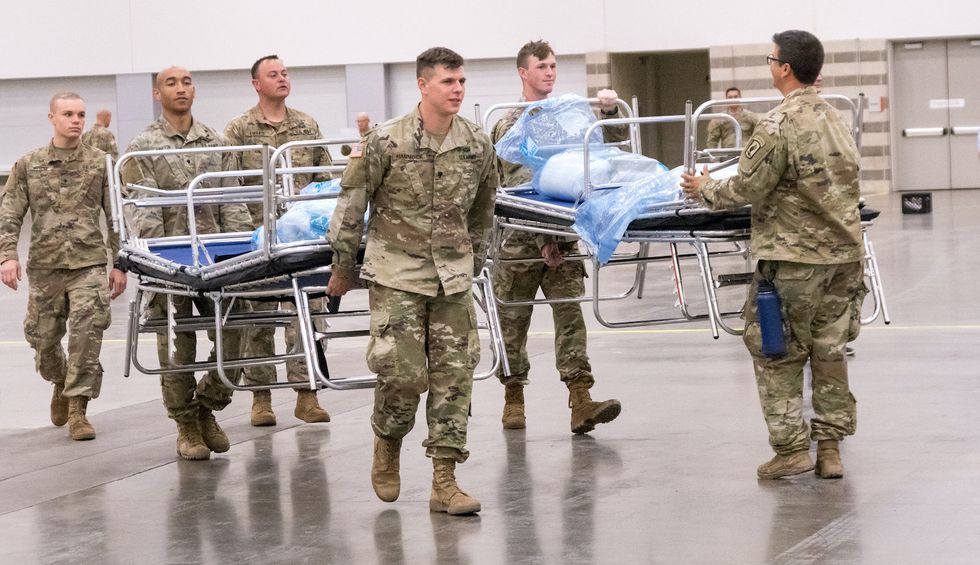 As the number of COVID-19 cases in Dallas skyrocketed, Lou Luckhardt worried about his colleagues and the public they serve.

With local treasuries already stretched to the breaking point, he believes it’s now up to the federal government to step in and provide resources to help slow the virus’ spread.

But instead of lending the assistance that public servants across the country urgently need, Donald Trump offers a monumental failure of leadership. Burying his head in the sand, Trump’s big plan involves wishing the virus away while leaving Americans, including Dallas’ dedicated government workers, in ever-mounting peril.

“For me personally, there’s a certain fear of what might happen to my family and myself,” said Luckhardt, a probation officer who has seen both co-workers and clients stricken by COVID-19.

“It’s on your mind all the time,” he explained. “You can’t escape it.”

But in recent weeks, the state’s easing of lockdown restrictions and spiraling infection rates also created new challenges that Dallas and other communities will have difficulty addressing on their own because of budget shortfalls caused by the COVID-19 recession.

For example, Dallas workers want coronavirus tests to make sure they neither spread the virus to co-workers or the public nor bring it home to loved ones.

And government facilities—especially smaller and older buildings scattered throughout the metropolitan area—require renovations to ensure the social distancing crucial to controlling the virus.

With local budgets decimated by the crisis—the city of Dallas already furloughed hundreds of workers—only an infusion of federal money can pay for these and other measures that public servants need to protect themselves and the people they serve.

Yet Trump not only failed to channel existing stimulus funds to hard-hit areas like Dallas but also refused to use his clout to push an acceptable local government aid package through Congress.

It angers Luckhardt to know some stimulus funds, like the nearly $1.4 billion the Trump administration mistakenly mailed to about 1.1 million dead people, were squandered while his workers need so much help.

But it wasn’t just a shortage of money that left communities across the country vulnerable to the pandemic.

Trump’s reckless conduct allowed Dallas—along with large swaths of the South and West—to become the COVID-19 hotspots they are right now.

Face masks and social distancing play critical roles in controlling the spread of COVID-19. But many people across the country, including some in Texas, refused to follow those guidelines. Now, they’re paying the price with soaring infection rates.

“This is a part of the country where it’s warm, it’s hot, and it’s uncomfortable to wear a mask,” Luckhardt explained. “And people don’t like mandates.”

Trump could have made a difference.

Instead of insisting that people take the commonsense safety precautions recommended by his administration’s own health experts, however, Trump emboldened mask opponents by refusing to wear one himself.

He even ridiculed people for putting them on.

“I think that significantly helped politicize things to the point where you were macho if you didn’t wear one,” said Luckhardt, who still sees people in the greater Dallas area walking around without them.

As if flouting mask guidelines weren’t foolhardy enough, Trump’s mass gatherings—like his campaign rallies in Tulsa, Oklahoma, and Phoenix in June—signal that it’s all right for Americans to assemble for parties and other events even though the virus spreads swiftly through large groups.

It was exactly that kind of community spread, especially through gatherings of people in bars, that drove the dramatic COVID-19 surge throughout Texas. On June 30, Dallas County reported a whopping 600 new cases and 20 deaths in a single day.

Americans’ refusal to follow mask and social distancing guidelines also contributed to fresh outbreaks of COVID-19 in more than 20 other states, with the U.S. seeing more cases now than when the pandemic hit months ago.

“This is the height of the summer, and we’re having this kind of problem. It doesn’t bode well for us in the fall,” Luckhardt said, noting a wave of the flu could leave residents even more susceptible to the virus.

Trump’s failure to roll out a comprehensive COVID-19 testing program was one of the biggest blunders of his initial pandemic response.

And he learned nothing from his early mistakes.

He just decided to cut funding to 13 COVID-19 testing sites in five states—two of them in Dallas and five in other parts of Texas—at a time people need them most. After Trump’s own Republican allies protested this irresponsible decision, he agreed to extend the funding for some of the sites—but only for a mere two weeks.

“Now people are panicking to a certain point and want to get tested,” Luckhardt said, citing the hours-long wait at one Dallas testing center.

Officials vowed to keep some of the centers open without federal support, but that will just mean dipping into already-depleted local treasuries or diverting money from other pandemic-related initiatives like contact tracing.

Right now, Luckhardt and his colleagues work in a constant state of anxiety, never knowing who among them might have the virus or get it from the public.

He still hopes the federal government will come through with money and other resources so workers can protect themselves while safely serving others.

And Luckhardt hopes the nation develops a “unity of purpose” that will prompt a greater number of Americans to wear masks, practice social distancing and take the other steps health officials recommend to combat COVID-19.

“If we can get more people to follow the directions, maybe that will help to turn this thing around,” he said.