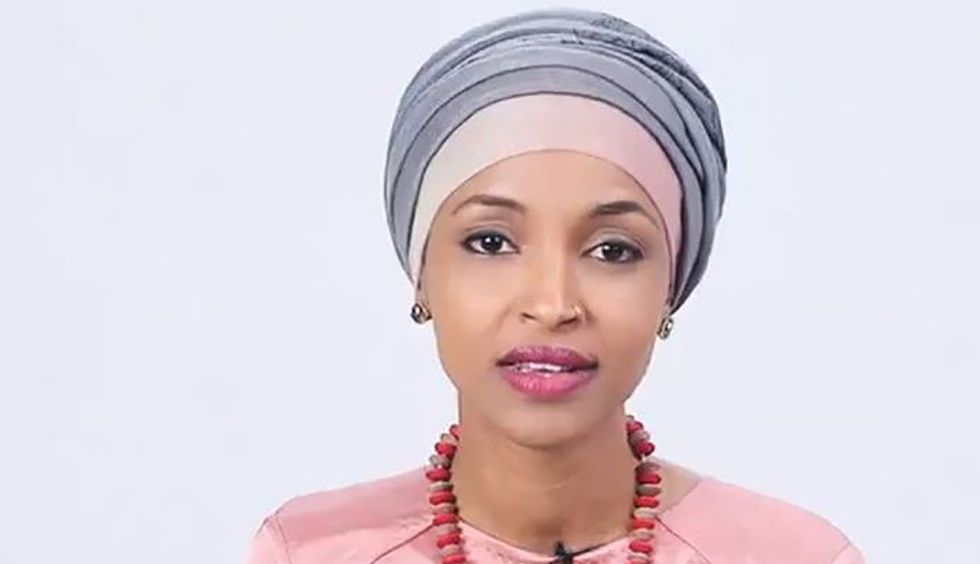 Rep. Ilhan Omar pushed back Tuesday night on Republican attacks after her remarks calling for the "dismantling" of U.S. systems of racism and oppression were characterized as un-American and dangerous by Fox News host Tucker Carlson, Republican House Minority Leader Kevin McCarthy, and other right-wing extremists.

"It is telling that a black woman discussing systematic oppression is so triggering to the right," Omar tweeted as performative conservative outrage over her remarks increased through the evening.

“As long as our economic and political systems prioritize profit, without considering who is profiting and who is b… https://t.co/gs5P5rKOeV
— Ilhan Omar (@Ilhan Omar) 1594165295.0

Omar's remarks, made at an outdoor press conference on systemic racism Tuesday in Minnesota, called for an ambitious approach to addressing myriad issues of oppression and inequality that pervade the American system.

While policing in America is a major issue of concern, Omar said, it is far from the only factor that explains why large percentages of Black people in the U.S. are relegated to poverty and unequal outcomes. Pushing back on those systems, the Minnesota Democrat said, will take more than simply changing law enforcement.

Republicans reacted with anger, with Sen. Marsha Blackburn (R-Tenn.) tweeting that the remarks were evidence that "Omar and her Marxist comrades are a threat to our Democracy" and calling on the Minnesota congresswoman to resign—comments that Intercept journalist Glenn Greenwald called "moronic."

This is completely moronic. Calling for the dismantling of systems which a member of Congress believes to be unjust… https://t.co/5UDnoNhAqz
— Glenn Greenwald (@Glenn Greenwald) 1594161408.0

Jamaal Bowman, Democratic nominee for Congress in New York's 16th District, opined that the GOP seized on and knowingly mischaracterized Omar's comments in order to distract the public from ongoing inequality and injustice.

"They want Americans to hate Black women, Muslims, and refugees more than the people in power benefitting from a system that causes the majority to suffer," tweeted Bowman.

Carlson, on his 8pm Fox News show, attacked Omar and Sen. Tammy Duckworth (R-Ill.) for what he described as attacking the fundamental values of America.

"We have every right to fight to preserve our nation and our heritage and our culture," Carlson said.

As the New York Times reported, going after Omar and other prominent politicians of color is nothing new for the two men:

Nativist attacks on Democratic women of color in Congress are hardly new for Mr. Carlson and Mr. Trump. Ms. Omar was one of four Democratic women who were the target of "send her back" chants at a Trump rally in North Carolina nearly a year ago. She is also, along with Representative Alexandria Ocasio-Cortez of New York, featured in a scores of Republican television ads and political mailers as examples of what the party’s candidates are fighting against.

"They're telling on themselves," tweeted Briahna Joy Gray, journalist and former press secretary to the 2020 presidential campaign of Sen. Bernie Sanders (I-Vt.).

"Ilhan Omar is the truth teller in Congress we have been waiting for," activist Linda Sarsour said on Twitter. "She speaks inconvenient and necessary truths. You may not agree with her but this country must come to terms with her."

Leah Greenberg, co-executive director of Indivisble, noted the right-wing's use of outrage to stir up anger over Omar's comments despite the fact that they are hardly outside the mainstream of political discourse.

"Just to be clear, Ilhan Omar is under attack by the rightwing media machine for statements that are utterly normal and totally uncontroversial when they're delivered by white, non-Muslim politicians," Greenberg tweeted. "As usual."