GOP insiders fear Trump’s MAGA base isn’t as solid as he thinks: report 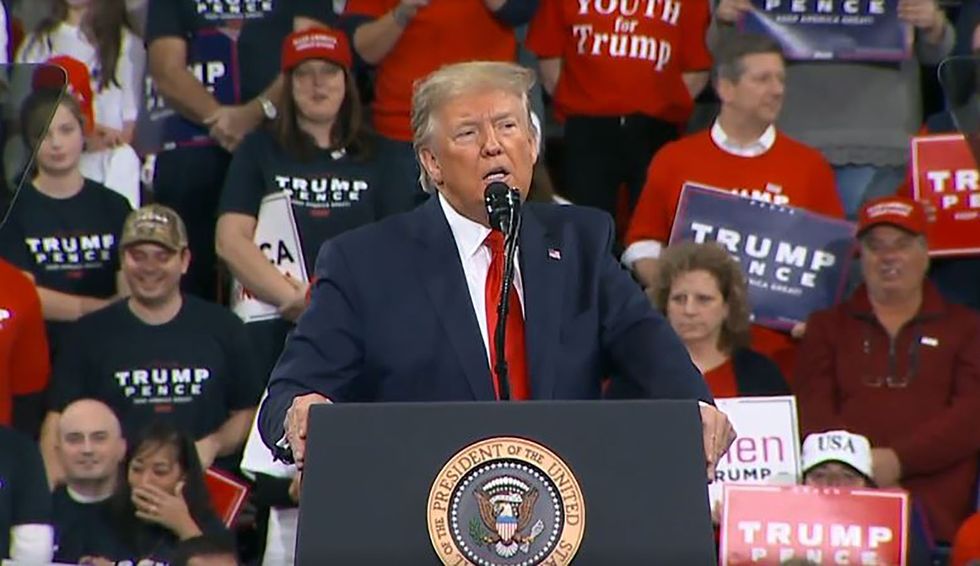 If President Donald Trump is reelected in 2020, it won’t be because of California, Massachusetts, New York State or Oregon. Rather, Trump will need a heavy turnout in red states as well as in the more GOP-friendly parts of swing states like Pennsylvania, Virginia, Arizona and Florida, which is why he has been running a far-right campaign and making a concerted effort to rally his MAGA base as much as possible. But journalists Sam Stein and Asawin Suebsaeng, in an article published in the Daily Beast on July 27, address Republican fears that the president’s base might not be as solid as they would like it to be.

“With fewer than 100 days to go until Election Day,” Stein and Suebsaeng explain, “President Donald Trump and his chief political advisers are barely lifting a finger to expand his coalition of potential voters. Instead, they are desperately attempting to turn out Republicans, prevent his base from fracturing, and ward off conservative defections that would seal his fate as a self-described one-term ‘loser.’ It’s an election strategy that has left others in the Republican Party equal parts perplexed and paralyzed — fearful of the president’s wrath, but also, confused about why he isn’t making any sustained effort to expand his electoral coalition.”

In a July 26 tweet, Trump bashed the Reagan Foundation, former House Speaker Paul Ryan and Fox News for not being right-wing enough. And a Republican strategist, presumably interviewed on condition of anonymity, cited that tweet as a perfect example of why Trump’s rally-the-base approach is problematic — telling the Beast, “I thought, ‘Damn, he jammed a lot in there in one broadside.’ The base is the piece he can control the most, but there are times where he sees his base as a larger portion of the Republican voting bloc than it is. There are a lot of gettable Republicans outside of the cultural issues that he plays on.”

Stein and Suebsaeng report that “within the upper echelons of Trumpworld,” there is a “broader anxiety…. that the president’s conservative base — which Trump and the party have long touted as rock-solid and fiercely loyal — may be starting to rupture amid the coronavirus pandemic, a weakened U.S. economy and protest movements in the aftermath of the police killing of George Floyd. It is a concern that some close associates of the president have raised to him directly.”

A Republican insider, quoted anonymously, explained to the Beast, “I told (Trump) that he should believe the polling, and that it shows that the way things are going, some of his base may abandon him by the election. That is what the numbers are saying.” GOP strategist Barry Bennett, who was among Trump’s advisers for his 2016 campaign, believes that the president should be talking about the economy more.

Bennett told the Beast, “The president has tremendous power in what to talk about, and he has kind of gotten off-track in talking about what the media wants him to talk about. He should be tweeting pictures of people going back to work…. Let’s see some pictures of those people…. The media is not gonna help him tell the good news. He’s gotta do it himself, and he should use his platform for that.”

In June, the United States’ unemployment rate — according to the Bureau of Labor Statistics — was 11.1% compared to 13.3% in May or 14.4% in April. In other words, the U.S. still had double-digit unemployment last month.

Bennett also told the Beast, “I’m not sure there are many undecided people in this country. So, it’s more a question of tending to your base and turning them out. I get why he doesn’t like the Fox polling. But tweeting about that isn’t going to get you any votes.”