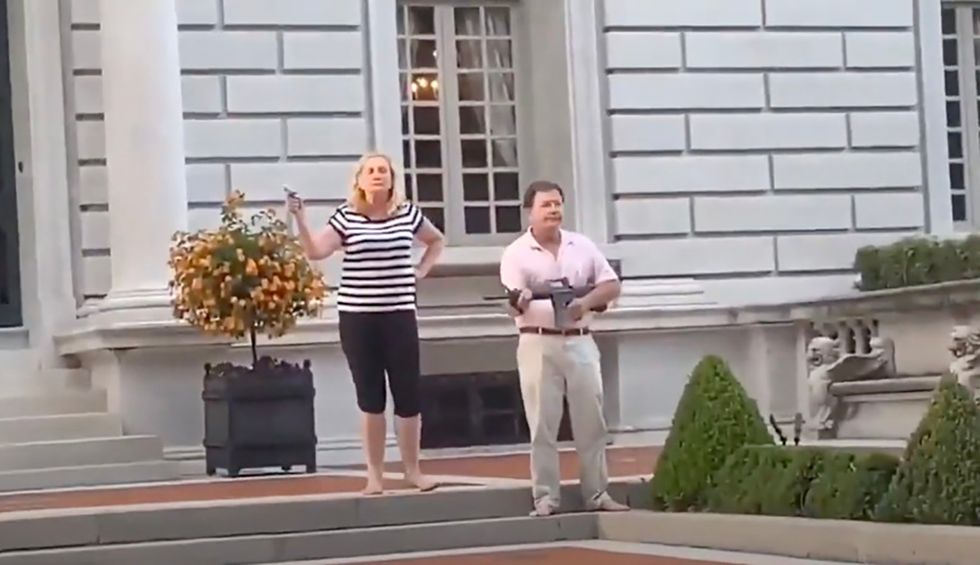 The white couple from Missouri who were caught on camera brandishing firearms at Black Lives Matter protesters walking in front of their mansion last month have been charged with felony unlawful use of a weapon, St. Louis Circuit Attorney Kim Gardner said Monday.

Gardner announced the charges against local plaintiffs' attorneys Mark and Patricia McCloskey in a statement alleging that the "disturbing" event had endangered "peaceful, unarmed protesters."

"It is illegal to wave weapons in a threatening manner at those participating in nonviolent protest," she said.

"We must protect the right to peacefully protest," she added, "and any attempt to chill it through intimidation will not be tolerated."

Parson added that it was a "sad day" for his state. The governor, who is seeking election this fall, also said President Donald Trump had agreed in a call that the McCloskeys should not face charges.

Hannity then asked Parson about information he had gleaned from "a source" claiming that federal authorities had helped protect the McCloskeys' property when a group returned to protest July 3 outside of their home.

"I had a source telling me that when the protesters went back to the McCloskeys' home that there was no local police present," Hannity said. "But the president had sent in some support. Is there any truth to that?"

Parson did not say one way or the other whether the federal government had afforded the McCloskeys what would amount to a personal security detail. But he did confirm that he had spoken with the president about what to do in the event of charges.

When protesters returned to the McCloskey manse July 3, "more than a dozen men in plain clothes walked the grounds and peered out from a second-floor balcony of the couple's home," the Associated Press reported.

In a call with Salon, Patricia McCloskey declined to comment on Hannity's comments regarding federal "support." Patricia McCloskey said she had not yet seen the broadcast and would need to consult with her husband before responding.

The McCloskeys' attorney, Joel J. Schwartz, initially told Salon twice in a phone conversation that Hannity's claim was accurate: Federal agents had, in fact, provided security at the couple's home.

Schwartz, who said he was "disheartened" by the felony charges, also told Salon that Mark McCloskey had personally arranged for additional security. He said that the McCloskeys needed the support, because they had received threats.

After telling Salon he would ask Mark McCloskey for more details, Schwartz changed his story, writing in a text message: "I do not have any information regarding who contracted for security at their home."

"The federal government did not procure security for him," Schwartz added.

However, when asked whether the federal government had provided security, Schwartz said he did not know and would not comment. Given multiple opportunities, Schwartz did not deny the claim.

In a follow-up call with another journalist from Salon, Patricia McCloskey declined to comment.

"I thought I put a call block on this," she said.

A spokesperson for the St. Louis Metropolitan Police Department told Salon that it had monitored the July 3 protest but "cannot confirm who was on their property."

The charges against the McCloskeys come after a lengthy joint investigation between Gardner's office and the SLMPD, throughout which the McCloskeys have gone on a media blitz in what appears to be an effort to drum up support from Trump and his allies in conservative circles.

The McCloskeys took part in a virtual Trump campaign event Friday night, where they were interviewed by Kim Guilfoyle, the romantic partner of the president's eldest son and a senior campaign official. Guilfoyle tested positive for COVID-19 on July 4.

"I thought I was going to die," Mark McCloskey told Guilfoyle, describing the initial protest.

"I thought that within seconds we'd be overrun, they'd be in the house, they'd be setting fires, they'd be killing us," he added.

Patricia McCloskey said the couple had called St. Louis police before arming themselves, but authorities said they received no such call, local CBS affiliate KMOV reported.

Reached for comment for this article, a spokesperson for Parson's office referred Salon to the governor's Twitter statement about Gardner's charging decision.

Gov. Parson, who was previously sheriff of Polk from 1993-2004, has long been at odds with Gardner, the city's top prosecutor and a Democratic elected official. In 2018, Gardner, who is Black, dropped invasion of privacy charges against Parson's predecessor, former Democratic Gov. Eric Greitens, in exchange for his resignation amid fallout from an extramarital affair.

Parson, who had been elected lieutenant governor, now faces his first gubernatorial election in November. The former small-town sheriff has made it known that he plans to run on a law and order platform, and he has enlisted Trump and Attorney General William Barr as allies.

Earlier this month, Parson sent Barr a letter requesting federal assistance to combat a spate of violent crime in St. Louis, unbeknownst to the city's mayor, who only learned of it later via Twitter.

Parson told Hannity on Monday that Trump had already sent more than 200 FBI agents to the state to help combat violent crime.