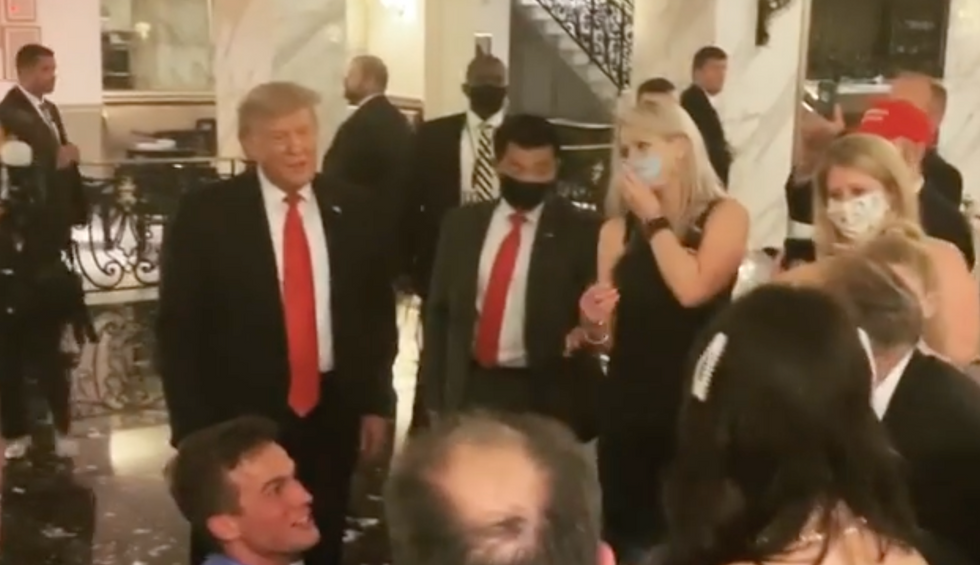 After months of adamantly refusing to wear face masks in public places, President Donald Trump had a very different message when he spoke at a White House press briefing on Tuesday afternoon and enthusiastically encouraged Americans to wear them. But that doesn’t mean that Trump is practicing what he preached. According to Washington Post reporters Fenit Nirappil and Julie Zauzmer, Trump’s “apparent defiance of D.C. coronavirus regulations” earlier this week “has caught the attention of local authorities.”

Trump, Nirappil and Zauzmer report, “did not wear a mask while greeting a congressional candidate holding a Monday fundraiser at his downtown Washington hotel, according to video of the event. Nor did multiple guests while they were standing near each other in the lobby, the video shows.”

Well this was cool.

This, according to the Post journalists, is a blatant violation of the social distancing rules that D.C. Mayor Muriel E. Bowser announced in the spring. She ordered D.C. residents to cover their faces in hotels and maintain a distance of at least six feet from others.

John Falcicchio, Bowser’s chief of staff, told the Post he was aware of reports that Trump and others weren’t wearing masks in the hotel and said, “We’ll send it to our agencies. They’ll look into it.”

Nirappil and Zauzmer note: “Despite overwhelming support for masks from public health experts, the coverings have become a political litmus tests of sorts, with many Republicans eschewing them. As virus cases have spiked in the southern and western United States, however, a growing number of Republican elected officials have taken to wearing face coverings and calling them necessary.”

The reporters observe that Trump “has softened his long-standing resistance and hostility to the use of masks to reduce coronavirus transmission,” and on Monday, he even “tweeted a photo of himself wearing a mask and called it patriotic — hours before he showed up at his hotel without one.”

We are United in our effort to defeat the Invisible China Virus, and many people say that it is Patriotic to wear a… https://t.co/zcdVQe2vRn
— Donald J. Trump (@Donald J. Trump)1595274226.0