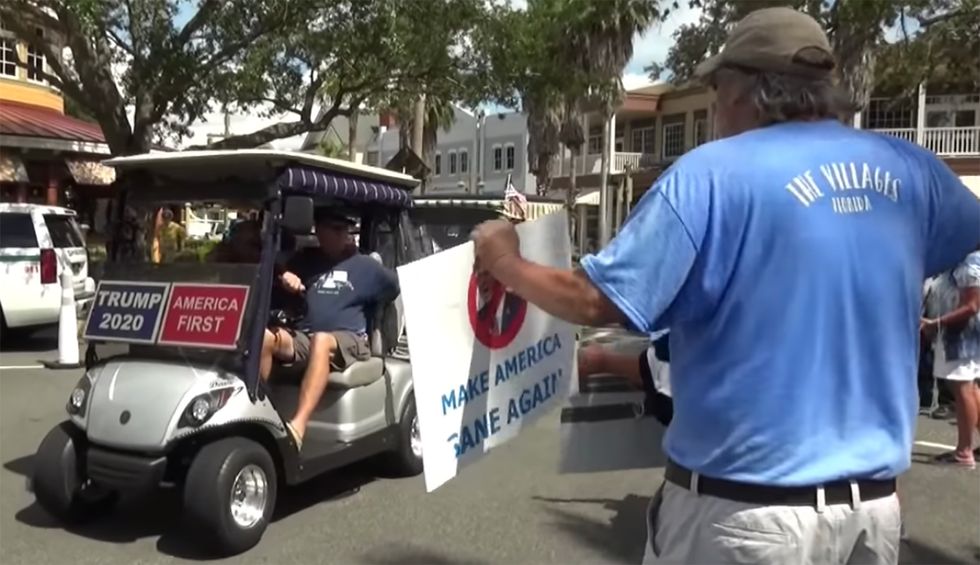 The Villages is a sprawling “age 55-plus” community in central Florida, home to approximately 120,000 well-to do Floridians, mostly retirees. Boasting “an amazing selection of recreation facilities and parks” as well as “many social clubs and activities,” the community is so large it resembles a small city, encompassing three zip codes.

According to Kimiko de Freytas Tamura, writing for the New York Times, residents of the Villages had, for the last four months, basically lived without paying a great deal of attention to the Covid-19 pandemic that has ravaged other areas of the state. Two-thirds of those claiming residence are registered Republicans (some of the more politically active folks within the community were recently celebrated by Donald Trump when he retweeted a golf cart procession commemorating Trump’s birthday, notably highlighted by one Villages resident shouting “White Power!”). In fact, the political affiliations of Villages residents seem to be among the easiest to discern anywhere in the country. As the leader of the Villages Democratic Club, quoted in the Times article, explains, “You can tell who is a Democrat, who is a Republican by their masks.”

The relative insularity of the community and its physical distance from areas of serious Covid-19 outbreaks within the state had apparently, up until this point, prevented significant increases in Covid-19 infections during the first four months of the pandemic. Those halcyon days, however, appear to be ending, and for a hugely vulnerable population, the mounting number of cases within the Villages since the beginning of July has been alarming.

As the Times reports:

Since the beginning of July, hospital admissions of residents from the Villages have quadrupled at University of Florida Health The Villages, the hospital’s critical care doctors said. As of last week, the hospital admitted 29 Villages residents, all of them with the virus, said Dr. Anil Gogineni, a pulmonologist and critical care doctor there. That was up from the single digits three weeks before.

In Sumter County, the biggest of three counties where most of the Villages is concentrated, the number of cases ballooned from 68 in the first week of June to more than 270 last week, according to the county’s health department.

Still, the reality of what is almost certainly about to crash down on them still seems to be eluding most residents. As the Times article notes (and the photos accompanying the article make clear), the areas’ golf courses remain open and filled to capacity, as do the hair salons, bars, restaurants and picnicking areas, by people not wearing any types of masks. Described are loud laughterand 'line dancing" classes as these senior citizens congregate, seemingly unmoved by the SARS-Cov-2 virus literally encroaching on their doorstep:

They turn up the volume on a radio and dance in the squares. They crowd bars where songs by Elvis Presley and Bobby Sherman play. There are picnics and water aerobics classes.

Virus numbers from the towns just outside the confines of the Villages are even higher. It’s certainly possible that these are attributable to those “essential workers” who service the Villages residents in those same bars, restaurants and golf courses.

Some of the attitudes displayed by the Village residents (as documented in the Times article) are rather telling. Upon being infected, some residents are described as becoming secretive and hiding the fact, as if they had some form of leprosy. As one resident interviewed for the article put it, “It’s like the plague and they don’t want to let anybody else know that they’re sick.” Importantly, residents say they have received no instructions to inform the property managers if they become sick, which suggests that no effort is being made to determine their contacts.

Florida Governor Ron DeSantis visited the Villages on July 6, at that time heaping praise on residents for adhering to safety precautions. According to the Villages’ own news outlet, DeSantis “said he had been told by Villages officials about how well residents are doing with social distancing and other precautionary measures.”

But, as the Village-news.com site points out,

DeSantis’ comments would indicate that he isn’t aware of large groups that have been seen gathering at some area restaurant bars, private parties and throughout various other locations in the community. Line dancers often can be found congregating together in the Lake Sumter Landing area and thousands of people packed into the same town square recently for two separate golf cart parades – the majority of whom weren’t wearing masks nor practicing social distancing.

DeSantis apparently also wasn’t aware of Sumter County sheriff’s deputies having to patrol Lake Sumter Landing early on during the pandemic to break up gatherings on the covered patios, which eventually had to roped off to keep Villagers away from them.

In fact the Village-news article includes a cornucopia of instances involving Villagers ignoring social distancing. It’s not clear whether DeSantis was being unduly credulous to what he “heard” from Village management or whether he was simply inventing some pleasant facts.

Whatever the case, it appears that the Covid-19 pandemic is poised to wreak havoc among some of Florida’s wealthiest senior citizens, many of whom, predominantly Republicans, still appear to be in a complete state of denial. As Tamura notes in her article for the Times, “About 20 percent of Florida’s population is 65 or older, the highest percentage in the nation alongside Maine, and that age group has made up half of its coronavirus hospitalizations and over 80 percent of deaths.”

Note: For a countervailing viewpoint regarding the Times’ portrayal, please see this from blueash in the comments.